The Golden Globes of hatred

During last night's awards show, decades' worth of skepticism and resentment bubbled to the surface 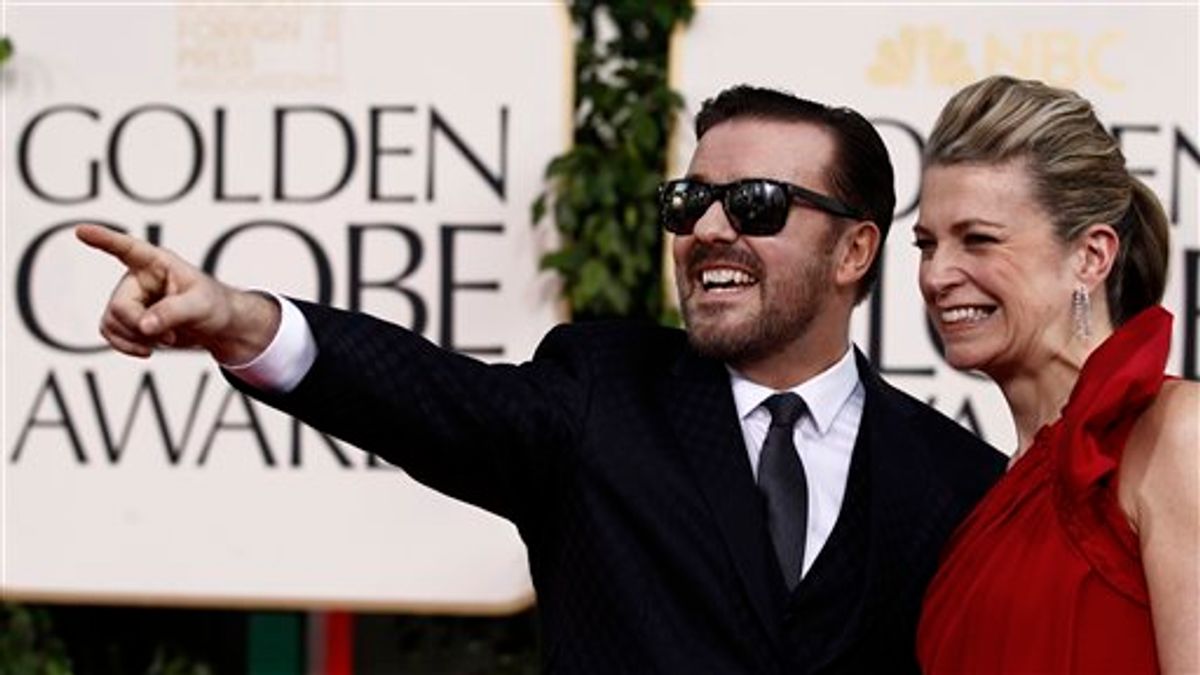 Sixty-eight years' worth of ingrained cynicism about the Golden Globes came to a head last night. But before designating Ricky Gervais the bad mojo patsy of the disastrous 68th annual Golden Globes telecast, let's establish a few salient facts.

First, gleeful needling has been that comic’s stock-in-trade for about two decades, and the awards show’s governing body, the Hollywood Foreign Press Association, hired Gervais to host the broadcast in 2010 as well. Unless you're a complete dunderhead, you don’t invite a scorpion into your tent without expecting him to sting you, especially after inviting him in exactly one year earlier and getting stung 23 times in the face.

Second, it’s not as though the Golden Globes ceremony had much dignity to lose. Stars attend  and viewers watch not in spite of the event's junior-prom after-party atmosphere, but because of it. On the Oscars and Emmy broadcasts, it’s a big deal when people go off-script, act like fools, or bite the hands that feed them. On the Globes telecast, we expect such behavior and feel disappointed if we don’t get oodles of it.

Furthermore, the Golden Globes' governing body, the Hollywood Foreign Press Association, has been a reliable source of cynical insider humor since the last night’s final presenter, Michael Douglas, was a toddler. The go-to joke about the HFPA used to be that nobody knew much about the group except that they were professional parasites who knew how to throw a party. Now both Hollywood insiders and showbiz-savvy viewers know exactly who's in the group -- a motley crew of 95 writers for overseas publications -- and the go-to joke has evolved into more or less what Robert DeNiro said while accepting his Cecil B. DeMille Award for career achievement last night: "The important thing is that we are all in this together: the people who make the movies, and the Press Association members who in turn pose for pictures with the movie stars." (The group was sued last week by its former publicist for running what amounted to a massive, ongoing payola scheme, selling nominations for bribes and giving lesser-known media outlets good spots on the red carpet in exchange for cash payments.)

The telecast reminded me of the last 30 minutes of a Friar’s Club roast, when the facade of good-natured ribbing has disintegrated and you're left with the spectacle of sadomasochists whipping each other, only it was like that all the way through -- an orgy of hatred and self-hatred interrupted by flashes of warmth, pride, nostalgia and wit, like pretty much any other awards show telecast times 10. From the instant Gervais kicked things off with a description of Charlie Sheen’s thug high jinks (Bold humor! Risky, too!), to his mention of presenter Robert Downey Jr.'s past drug addiction and jail stint (Bolder still!), to the final zoom-out over Gervais exclaiming, "Thank you to God for making me an atheist!" (OK, actually bold) the show was awkward and sour -- and not just because Gervais was behind the podium, doing his patented Lovable Dick routine (but a tad more lazily than before, and with greater vanity; no more self-directed fat jokes for this slimmed-down clown).

At the same time, however, the show was sort of amazing, because it captured the mix of naive sentimentality and rancid cynicism that defines showbiz -- and the audience's relationship to showbiz. The 68th annual Globes proved, more vividly than the mostly staid and self-mythologizing Oscar and Emmy broadcasts, that there is, in fact, a Hollywood community, that its members truly do respect one another for all kinds of reasons, and that when you put a few hundred of its most popular and/or accomplished denizens in the same ballroom, there’s a chance that the tribal hierarchies will dissolve for a few hours and they’ll see each other not as enemies, obstacles or undeserving slugs, but as peers and inspirations. ("I can’t believe we’re sitting at a table with Al Pacino, either!" said Terence Winter, accepting the best dramatic series award for his HBO series "Boardwalk Empire.")

And yet this very same group will summon the self-doubt and self-loathing that’s also a part of entertainment and project it through your TV screen in waves -- the deep-rooted fear that maybe success is less about talent than who you know and who you’ve screwed, and whether you’re strong enough to endure rejection and lucky enough to be in the right place at the right time; that perhaps this industry really is as childish, shallow and sleazy as everybody says; and that the Golden Globes -- and perhaps by extension all showbiz awards -- are so corrupt and worthless that they deserve to be mocked and reviled by the likes of Gervais. (As Humphrey Bogart snarled at Peter Lorre in "The Maltese Falcon," "When you're slapped, you'll take it and like it!")

Robert Downey Jr. zapped Gervais with the wittiest of the night’s aggrieved counterattacks -- "Aside from the fact that it's been hugely mean-spirited with vaguely sinister undertones, I’d say the vibe of the show has been pretty good so far, wouldn’t you?" -- then introduced the nominees for best actress in a comedy or musical with a meandering riff about how he’s tried to sleep with all of them. (Nothing mean-spirited or vaguely sinister there.) The crowd applauded actress Melissa Leo’s award as best supporting drama actress for "The Fighter," then chortled like a bunch of second graders when she thanked the film’s director, David O. Russell, for casting her "after those few hours we spent in the Maritime Hotel." ("No, no, no, no, you don’t know what kind of girl I am!" Leo exclaimed. "It’s all work, man!") And would you say it's time for Gervais to drop the "I created the original English version of 'The Office,' and now these money-grubbing Americans are ruining it" shtick? Yes, I know, it's all in jest, and it was funny the first 4,378 times he did it, but it's started to wear a bit thin now -- and when he did it yet again while introducing the NBC version's outgoing star, Steve Carell, the actor's characteristic blank-slate deadpan cracked open to reveal what looked like actual resentment. ("Ha ha ha ha ha ha ha," said Carell. "It never gets old.")

It was the sort of evening where such driven, prideful perfectionists as David Fincher, Paul Giamatti, Jane Lynch and Katy Sagal could seem genuinely self-deprecating while accepting their awards (and in Lynch’s case, hilarious, too), and "Glee" co-writer and co-producer Ian Brennan (Lynch’s personal dialogue writer) could thank the underpaid public schoolteachers of America without seeming like a phony. And it was the sort of evening where Downey, Tom Hanks, Tim Allen and even HFPA boss Philip Berk could ream the host for being a vicious snot and hypocritical bully ("Next time you want me to help you qualify your movies, go to another guy," Berk snapped, after Gervais joked about lifting him off the toilet and putting in his false teeth) while the broadcast’s guest of honor, De Niro, could joke that the ongoing scandal had caused members of the group to be deported "along with most of the waiters ... and Javier Bardem." (None of Gervais’ jokes were bleeped, but something got cut out of the middle of De Niro’s speech, right around the point where he mentioned the titles of films that weren’t represented in his tribute reel; I’m guessing it was a joke about the corruption allegations that was censored for legal reasons, something along the lines of "Christ, maybe the check didn’t clear.")

The extremes of charm and rancor, affection and venom were all of a piece. There were no transcendently awesome moments along the lines of Ving Rhames giving his award to Jack Lemmon in 1998, but the mix of moods and attitudes was something to see. And the best bits of writing and delivery suggested that -- contrary to Gervais' rather disappointing example -- it is, in fact, possible to be sour and sweet at the same time.

Maybe Robert Downey Jr. should host next year, with De Niro as his sidekick.