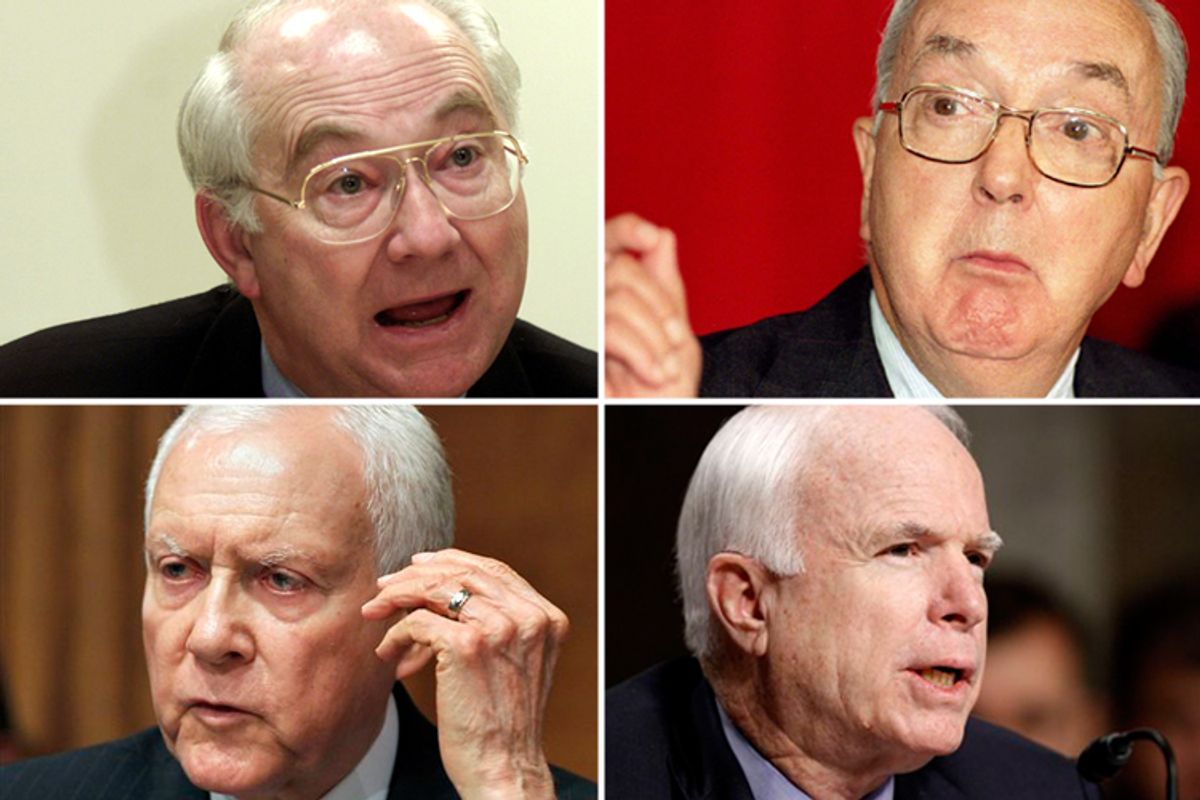 All of the old white guys pictured above voted against the establishment of Martin Luther King Jr. Day as a federal holiday. (John McCain did, in 2008, apologize for his vote.) 28 years later, it's hard to imagine even a deeply Republican Congress opposing a holiday dedicated to Dr. King -- in part because some contemporary conservatives like to pretend the civil rights activist was or would be a Republican, but mostly because conservatives have spent years pretending to be a persecuted minority group.

That's why something like Sarah Palin claiming to be a victim of "blood libel" doesn't raise an eyebrow among the true believers. It's the myth that keeps the checks rolling in for most right-wingers. The liberals are all-powerful and they oppress us.

It's especially rich coming from Palin, obviously. The only thing the former governor seems to enjoy more than attacking her political opponents is acting like the entire world is aligned against her and her poor family. A tasteless joke from a late night comedian isn't simply part of the cost of living a public life, it's more proof that a cabal of liberal elites is devoted to the relentless persecution of innocent conservative Americans. (Part of the game involves purposefully conflating criticism from media figures with organized political attacks. What, after all, is the true difference between David Letterman and the DNC? They're all liberals.)

The longtime opponents of what they mockingly termed "the culture of victimhood" now revel in every perceived slight. Republicans accused of unethical behavior make great martyrs.

How bad is the delusion? When they aren't actually treated like oppressed minorities, they pretend they were. Have you seen the Coalition to Stop Gun Violence's exhaustive and remarkable "Insurrectionism Timeline"? Allow me to make the much less exhaustive Timeline of incidents in which young right-wingers pretended to have been the victims of political violence, or even "hate crimes."

Every so often, some young Republican will pretend to have been the victim of a violent hate crime. In 2006, there was Justin Jatkoff, who was supposedly beaten senseless by either black people or "a homosexual rights group" who'd sent him an "odd/threatening" e-mail. (He was actually just beaten up by his friends.)

Later that year, a conservative Mormon college student named Francisco Nava claimed to have received hundreds of death threats for a column attacking Princeton University's "hookup culture." He said he feared for his safety. Then he claimed he was brutally attacked by men in stocking caps who beat him with a bottle of Orangina. After he became a conservative cause celebre, the cops got him to admit that he'd invented the threats and the attack.

And then there's Ashley Todd, College Republican National Committee field representative, who claimed to have been brutally attacked by some liberal black person during the 2008 campaign, because she had a McCain sticker on her car. A "B" -- for "Barack" -- was even carved into her cheek. As we all remember, the B was backwards, because Todd has "carved" it herself.

When Democrats were complaining of death threats as the healthcare debate raged, then-minority whip Eric Cantor claimed someone shot up his office. Police determined that the bullet that landed inside a window at his campaign office had been fired randomly into the air.

The Tea Partiers, of course, are frequent self-declared victims of brutally unfair media coverage, and in their more feverish fantasies, they are even intimidated by "union thugs." (Violent, "thuggish" union members are the enforcers of the modern Apartheid-like regime that conservatives are forced to live under.)

Even when Republicans occupied the White House, controlled both houses of Congress, and maintained a working majority on the Supreme Court, they imagined themselves victims of all-powerful liberals.

So on this Martin Luther King Day, please, spare a thought for America's forgotten minority: Comfortable white conservatives. Especially the ones in academia, Hollywood, and the media.