My 15 minutes were more like seconds, the moments I spent in elevators with the famous artist 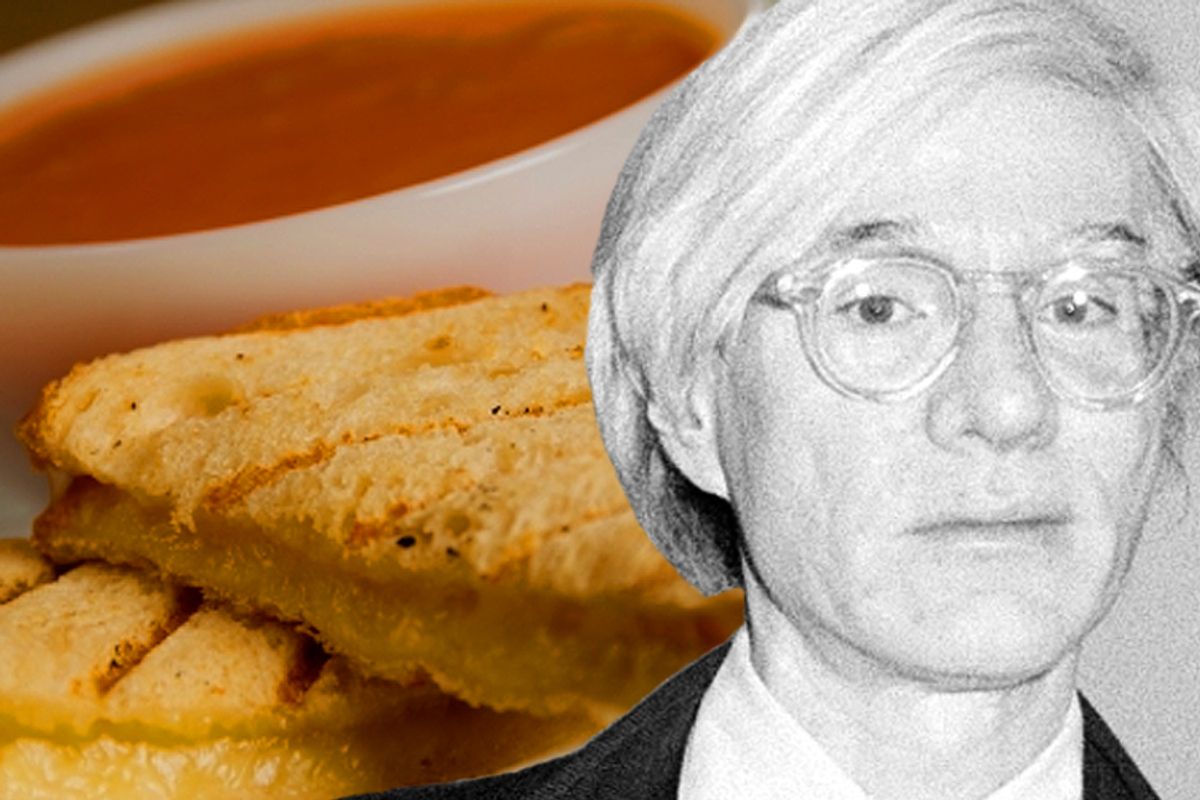 To just imagine the words "grilled cheese" is to be 5 again, sitting at our Danish modern dining table, swinging my pudgy legs from the too-high chair, with a cup of Campbell's tomato soup steaming in front of me, about to bite into a buttery grilled triangle of Pepperidge Farm white bread oozing with bright orange American cheese. For some reason, my mother never served one without the other.

It was the middle of the '60s and only just now did I connect the dots between the iconic soup can my mother would have opened to feed me lunch and her life away from our apartment as an artist in a studio one floor down from Andy Warhol's Factory. We would ride the elevator sometimes with the polite young man with the graying hair and his glamorous pals in their patent leather boots and fishnet tights. One day my mother came home shaking. She had been there when the polite young man was whisked away in an ambulance after being shot in the stomach by "a woman"!

Years later when Andy had recovered, he still needed to wear a medical corset under his shirt to "keep things together." His hair had turned white (though he often wore a silver wig that was mistaken for his own hair), and by then I knew who he was. I would see him on occasion at the various clubs my friends and I would frequent as 20-somethings trying rather hopelessly to inhabit our time as dramatically as he had his.

But it was the '80s and the flashy, ebullient promise of the '60s had turned darker and edgier. Instead of the frail and ethereal beauty of Edie Sedgwick and Twiggy, we had the leather-clad Ramones and Debby Harry in a ripped T-shirt to emulate. We wore safety pins on the outsides of our clothes and clomped around in boots with too many buckles.

Andy showed up late one night to a club, his spiky mop of hair a beacon amid the sea of black shirts and skinny jeans of his entourage. A girl I knew was with him. She had just written a book and was a momentary media darling. "Hey," I said. She pretended she didn't know me. I wanted to scream at her, "I fed your cat when you were in rehab!" She had been my next-door neighbor for a year and for countless nights I had listened to her crying jags through the thin wall that separated our bathrooms. "They hate me!" she would wail and sometimes glass would shatter.

Andy was taking pictures with a Polaroid camera and his friends would shake the developing images after they spit out. Before I turned away, I stared and took my own mental picture of him, not imagining that a few years later he would be gone. It is filed away next to that other mental picture I have of a little girl, years away from black clothes and ugly boots, happily soothed by a cup of soup from a famous can and a delicious brightly colored sandwich.

There are a few tricks to making a good grilled cheese sandwich, no matter what kind of bread or what kind of cheese you choose. Instead of melting butter in the pan, I always slather one side of the bread with room temperature butter before grilling. I always heat the pan before I start to grill. If you are adding any condiments like mustard, chutney or savory jam, spread them on the unbuttered side of a piece of bread before you put the cheese on. If you are adding anything else such as greens, tomatoes or bacon, add them after the cheese has started to melt and before you top them with the second piece of bread. Lastly, grated cheese melts more evenly than sliced cheese.