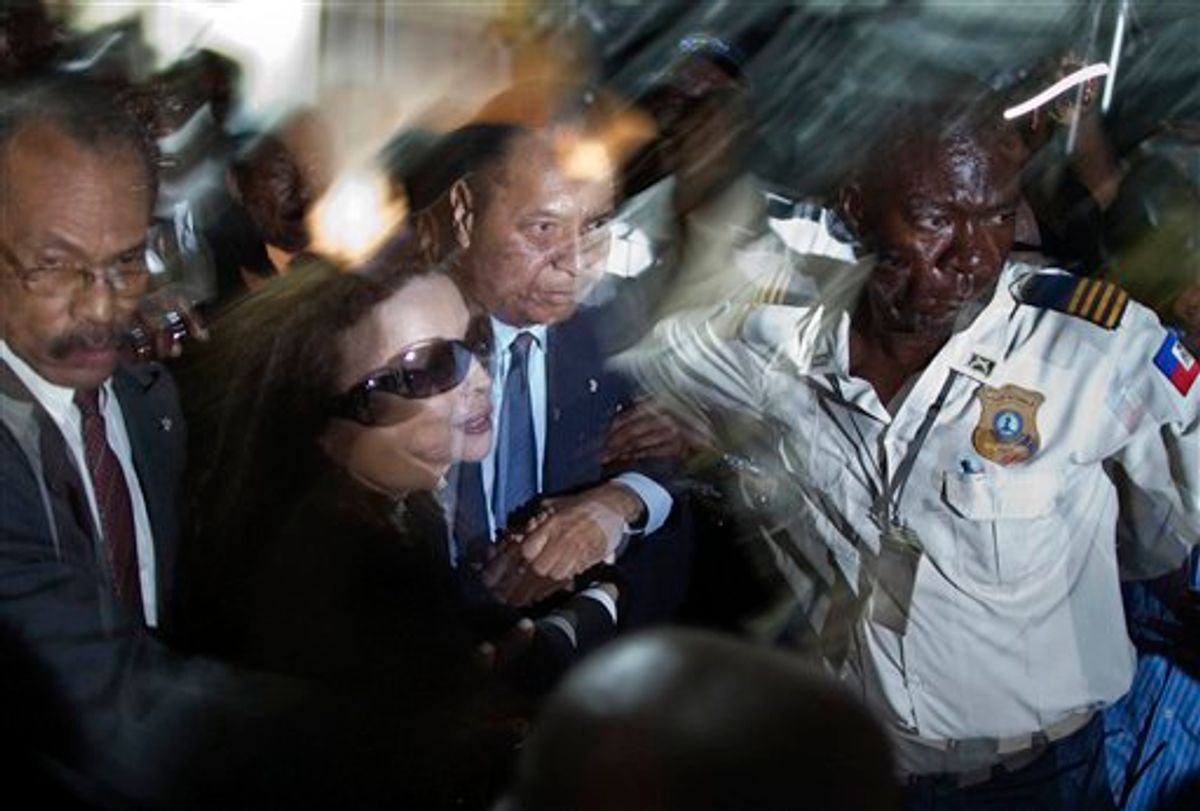 ** CORRECTS NAME OF WIFE TO VERONIQUE ROY ** Haiti's former dictator Jean-Claude "Baby-Doc" Duvalier, center, and his wife Veronique Roy are helped by a police officer as they are surrounded by reporters upon their arrival to the Toussaint Louverture international airport in Port-au-Prince, Haiti, Sunday Jan. 16, 2011. Duvalier returned to Haiti after nearly 25 years in exile, a surprising and perplexing move that comes as his country struggles with a political crisis and the stalled effort to recover from last year's devastating earthquake. (AP Photo/Ramon Espinosa) (AP)
--

Haitian police led ex-dictator Jean-Claude Duvalier out of his hotel and took him to court Tuesday without saying whether he was being charged with crimes committed under his brutal regime.

A contingent of police led the former dictator known as "Baby Doc" through the hotel and to a waiting SUV. He was not wearing handcuffs.

Duvalier, 59, was calm and did not say anything. Asked by journalists if he was being arrested, his longtime companion Veronique Roy, laughed but said nothing. Outside the hotel, he was jeered by some people and cheered by others.

The SUV drove in a convoy of police vehicles to a courthouse, even as dozens of Duvalier supporters blocked streets with overturned trash bins and rocks to try to prevent the former dictator from going to prison.

The courthouse was thronged with spectators and journalists trying to get in to view the proceedings. It was not immediately clear whether the session would be open to the public -- or what, if any, charges had been filed against him.

His removal from the hotel came after he met in private with senior Haitian judicial officials met inside his hotel room amid calls by human rights groups and other for his arrest.

The country's top prosecutor and a judge were among those meeting with the former leader in the high-end hotel where he has been ensconced since his surprise return to Haiti on Sunday.

Dozens of Haitian National Police officers were posted inside and around the hotel, some of them in riot gear or guarding the stairwells. A police vehicle for transporting prisoners was parked in front of the hotel's main door and all non-police traffic was halted at the driveway.

Henry Robert Sterlin, a former ambassador under Duvalier who has said in recent days that he was speaking as a spokesman for the former dictator, told reporters at the scene he was shocked by the developments. "Let's see if they put him in prison," he said.

None of the officials present would comment on what was being discussed at the meeting. Asked by journalists why he was going to meet Duvalier, Judge Gabriel Amboisse said, "I'm here to assist the prosecutor because he asked me to be here with him."

Duvalier was forced into exile in 1986 in a mass uprising and had been living in exile in France. Amnesty International, Human Rights Watch and others have urged the Haitian government to arrest him for widespread abuses.

Duvalier assumed power in 1971 at age 19 following the death of his father, Francois "Papa Doc" Duvalier. The father and son presided over one of the darkest chapters in Haitian history, a period when thuggish government secret police force known as the Tonton Macoute tortured and killed opponents.

The younger Duvalier still has some support in Haiti and millions are too young to remember life under his dictatorship. His abrupt return sent shock waves through the country, with some fearing that his presence will bring back the extreme polarization, and political violence, of the past.

He has not yet publicly commented on why he came back to Haiti. His companion, Roy, told reporters he would stay three days.

His return comes as Haiti struggles to work through a dire political crisis following the problematic Nov. 28 first-round presidential election, as well as a cholera epidemic and a troubled recovery from an earthquake.

Duvalier has also been accused of pilfering millions of dollars from public funds and spiriting them out of the country to Swiss banks, though he denies stealing from Haiti.

The U.N. High Commissioner for Human Rights spokesman Rupert Colville said Tuesday that Duvalier's return increases the chance that he could be charged with atrocities committed during his 15-year rule because it will be easier to bring charges in the country where the crimes occurred.

He cautioned, though, that Haiti's fragile judicial system may be in no position to mount a case.