Suddenly, the president decides some regulations are bad. It's the wrong battle to fight, at the wrong time 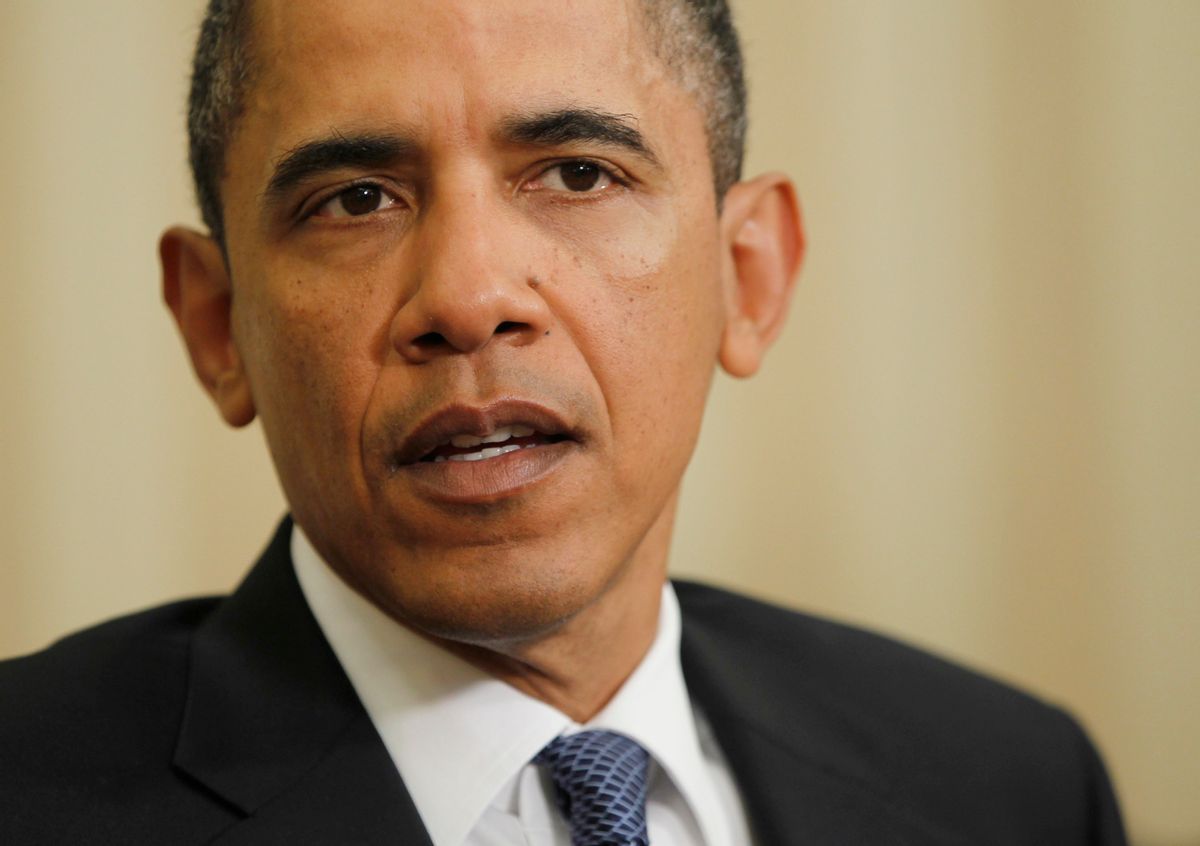 U.S. President Barack Obama speaks to the media about the shooting in Arizona during his meeting with French President Nicolas Sarkozy (not pictured) in the Oval Office of the White House in Washington, January 10, 2011. REUTERS/Jason Reed (UNITED STATES - Tags: POLITICS) (Reuters)
--

If viewed in total isolation from the context of current events, President Obama's Wall Street Journal Op-Ed explaining his decision to issue an executive order mandating that government agencies "strike the right balance" on regulatory policy would be utterly unexceptional.

For example, on the surface, there's little to get agitated about in the following two paragraphs.

From child labor laws to the Clean Air Act to our most recent strictures against hidden fees and penalties by credit card companies, we have, from time to time, embraced common sense rules of the road that strengthen our country without unduly interfering with the pursuit of progress and the growth of our economy.

Sometimes, those rules have gotten out of balance, placing unreasonable burdens on business -- burdens that have stifled innovation and have had a chilling effect on growth and jobs. At other times, we have failed to meet our basic responsibility to protect the public interest, leading to disastrous consequences. Such was the case in the run-up to the financial crisis from which we are still recovering. There, a lack of proper oversight and transparency nearly led to the collapse of the financial markets and a full-scale Depression.

Of course, one could argue that the damage done to the economy -- the millions of jobs lost -- by the deregulatory failures that laid the groundwork for the Great Recession most likely far outweighs anything that can be attributed to the Clean Air Act or child labor laws, but for now, let's grant Obama's basic point. In a bureaucracy as big as the United States government, there are undoubtedly confusing, contradictory and unnecessary regulations. It wouldn't be the end of the world to clean some of them up. Fine.

But on the day before House Republicans are expected to vote to repeal the Affordable Care Act, primarily on the specious grounds that it is a "job-killing" regulatory Frankenstein, the White House's decision to suddenly be concerned about the right balance between public safety and commerce is strange and discomfiting. The big battles of the next two years are going to be all about defending the regulatory achievements of the Obama administration -- healthcare reform and bank reform -- in addition to ensuring that the Environmental Protection Agency isn't hamstrung by Republican opposition as it carries out its Supreme Court mandate to treat greenhouse gases as pollutants under the Clean Air Act.

Conservatives are applauding the unexpected white flag. The U.S. Chamber of Commerce -- a lobbying front for big business that Obama officials were lambasting in the strongest terms just a year ago -- unsurprisingly called the news a "good first step." But since the Chamber was rabidly opposed to one of Obama's signature accomplishments -- the creation of the Consumer Financial Protection Bureau -- it's not hard to imagine what they think the second or third step should be: getting rid of the CFPB altogether!

On Tuesday afternoon, Obama's press secretary, Robert Gibbs, stressed repeatedly that the new initiative should not be considered a "roll back" of Obama's new regulatory regime. But in the context of the tug-of-war over regulatory policy that has been overwhelmingly won by advocates of deregulation since at least 1980, how could it be seen as anything but? Just as Republicans begin their big push to dismantle the infrastructure assembled over the last two years, Obama has unilaterally conceded them the rhetorical high ground. What's Lisa Jackson, administrator of the EPA, supposed to think after reading this executive order: Oops, maybe I shouldn't have shut down that coal mine?

The strategy is unfathomable, and the notion that we must now seek to strike the "proper" balance -- as if the proponents of greater regulation had been carrying the day in recent years -- is just plain nutty. If we only look at the eight years of the George W. Bush administration, we are witness to an era in which government agencies were dismantling or refusing to enforce regulations at every opportunity -- helping to create the conditions for mining disasters and oil well explosions and Wall Street market meltdowns.

In this context, striking the "proper" balance should only mean a continued effort to strengthen our regulatory system and put more muscle into enforcing what's on the books. It should mean, on the day before Republicans are set to assault healthcare reform, that a president who staked his political life on getting expanded health coverage through Congress would be taking to the media to reaffirm his determination to defend what little ground has been gained in the last two years, not to abandon the fundamental principles his party is supposed to embody.