Why is the U.S. so awful at job creation?

Labor markets in most advanced nations are recovering quickly. But the United States lags far, far behind 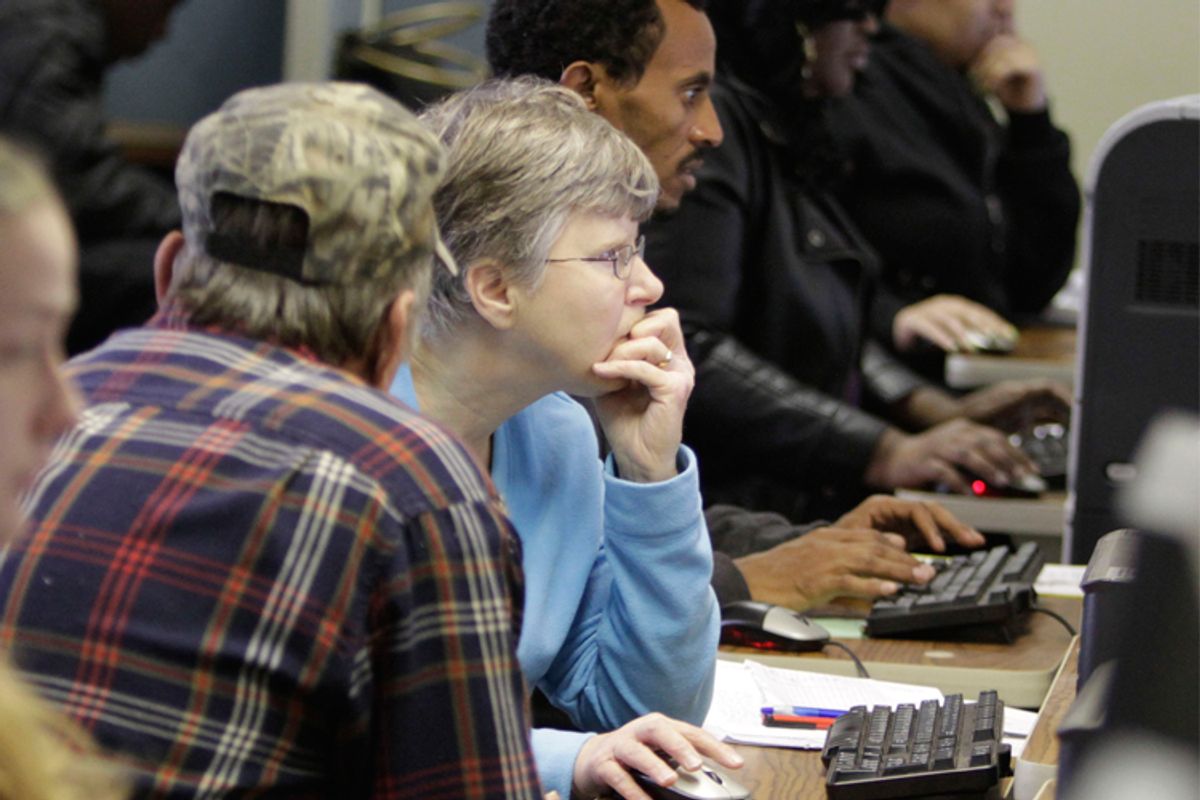 Unemployed workers use computers to search for jobs at the Virginia Employment Commission's Reemploy Virginia office in Mechanicsville, Va.
--

In Sarah Palin's recent book, "America by Heart: Reflections on Family, Faith, and Flag," the former Alaskan governor makes a big deal of every patriotic American's favorite conceit: the fervently held notion that the United States is an "exceptional" nation. You can translate this idea as you please, giving credit to God, our Founding Fathers, or the perfection of the Constitution, but politically speaking, at least for Palin, the important point to remember is that President Obama supposedly does not accept the proposition that America is "the greatest earthly force for good the world has known." Which makes him a bad, bad man.

My own understanding of Obama's beliefs, as derived from his books and speeches, leads me to believe that he is every bit as big a believer in American exceptionalism as any red-white-and-blue bleeding conservative -- he is, in fact, living proof of the idea. But I wish both he and Palin would pay more attention to a domain in which the U.S. is clearly exceptional, and not in a good way. More than any other advanced industrial rich nation, we have really, really sucked at creating jobs since the recovery from the Great Recession began.

Worthwhile Canadian Initiative has the charts. In comparison with other members of the G-7 -- Canada, France, Germany, Italy, Japan, the United Kingdom and the U.S. -- the United States has demonstrated remarkably good GDP growth since the beginning of 2009, second only to Canada's. But we're last, by a mile, in terms of new job creation over the same period.

These are critically important charts, because when we try to answer the question of why job growth has been so slow in the aftermath of the Great Recession, the disproportionately large gap between GDP growth and job creation demonstrated by the U.S. warns us not to be content with the usual list of bullet points that attempt to explain "jobless prosperity": globalization, technological progress, the relatively devastating effect of recessions caused by financial crises, et cetera. Instead, we must answer the question of why the U.S.'s experience is so different from that of its closest analogues on the global economic scene. And in explaining this degree of exceptionalism, neither the grace of God nor the brilliance of our Founding Fathers will suffice.

The current New York Times "Room For Debate" forum makes a weak stab at this question, proffering up a few paragraphs of comments from economists that only delivers a pale refraction of a much wonkier, far-ranging argument that has been obsessing the econoblogosphere over recent weeks (and is adroitly summarized by Ryan Avent at the Economist's FreeExchange blog here).

Again, all the usual suspects make their appearance. Globalization has undoubtedly played a huge role. This is not confined to merely the competitive threat of cheap labor in China or India, but also pertains to the fact that emerging markets are where the action is. G.M. is making bazillions of Buicks in China not just because it's cheaper to do so there, but because that's where customers are buying them.

Technological productivity improvements have also long been understood to discriminate against less-educated workers. And historically speaking, the record does show that financial crises are harder to come back from.

Perhaps most controversial is economist Tyler Cowen's contribution: Prior to the recession, U.S. labor rolls were packed with workers who didn't contribute much to the bottom line (displaying, in the argot of the dismal science, "zero marginal productivity"). When the recession hit, employers dumped those workers and never looked back.

But none of these explanations gives a satisfying answer to the exceptionality question. Globalization and technological progress affect everyone, and presumably, there are crappy workers everywhere. We must look elsewhere for the difference that makes the U.S. special.

How about this? In comparison to the rest of the G-7, the U.S. boast higher levels of income inequality, does a poorer job of educating its workforce, enjoys the double jeopardy of weaker labor unions and a sketchier social welfare net, and, at the government policy level, appears relatively  more influenced by the financial sector than by Main Street.

Add those all up, and it's pretty simple to understand why the U.S. has performed so badly at job creation while the economic recovery has gathered steam. There are massive forces working against labor in the developed world in the 21st century -- and the U.S. is exceptionally unprepared to deal with them.