Why I'm still watching "American Idol" after all these years

Judges come and go, but the show stands out as one of the few authentic reality TV programs 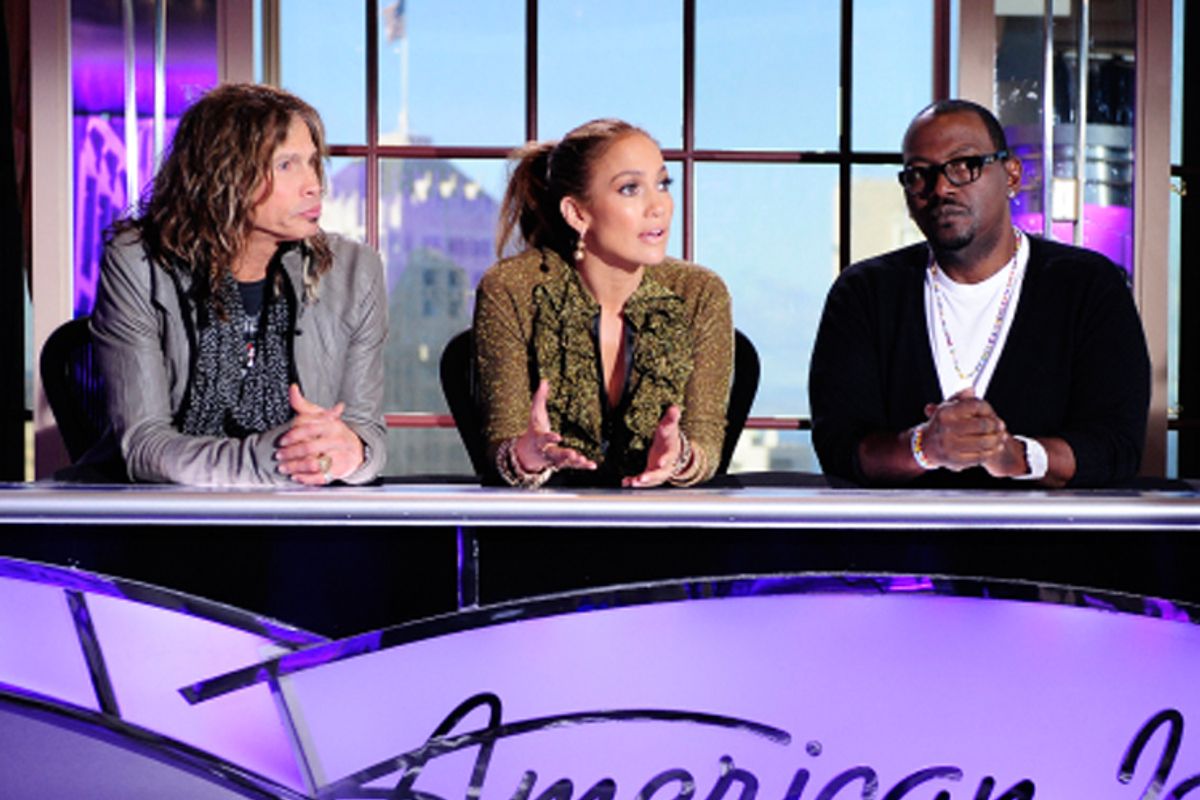 I've spent the better part of a decade defending "American Idol." At first, I described it as a "guilty pleasure," but I soon realized there was nothing to be guilty about. With the 10th season about to begin, it struck me as a good moment to explain just what has kept me watching it, all these years.

There were only six kids left in the competition when I discovered "American Idol" in the summer of 2002, toward the end of the first season. I happened on the show by chance, clicking through the channels on a sluggish Tuesday night. There wasn't much else to watch, and the show -- a charmingly modest, almost amateurish effort, by comparison with the current version -- had certain obvious assets. The judges, affable insider Randy Jackson, drugged-out, effusive nutcase Paula Abdul, and brutally honest Simon Cowell, were fun to watch. I carry their voices in my head and amuse myself to this day with the tribunal's critique of my daily life:

Randy: Yo, Dawg. How you doin? You stepped out of your comfort zone here, but It wasn't the right subject matter for you. It got a little grammar-y at the end. So I dunno, it was just a'ight for me.

Paula: First of all I love your font! It's just gorgeous. And your spelling is perfect as always. I don't care what Randy syyays, I loved it. So witty and articulate! You have star quality! I love what you do. Just go on, be strong be yourself! You could win this whole competition. The post of the night! (throws a kiss)

Simon: Well. That was effusive. I'm not taking any psychotropic drugs so this will be rather more honest. Do you have a writing teacher? Fire him. I could see a screed like this in any tatty blog on the internet. It reminded me of that awful toast at your cousin's wedding when the fat uncle refuses to shut up. If this was a thousand years ago, we'd have stoned you to death. You don't have a chance in this competition. Sorry.

There's a lot of what initially drew me to the show in that imaginary exchange -- Randy's stolid honesty, Simon's snide flirtation with Paula and his ongoing merciless attack on the mediocre,  his comments always capped with the most insincere apologies ever uttered on network television; Paula's loose cannon craziness that no one could have scripted.

Beyond the judges, the kids were talented. Kelly Clarkson won that year, but Tamyra Gray, eliminated in the round of four, was just as good, if not better. It struck me that summer, and I still feel this way, that "American Idol," far more than "Survivor," say, or "Undercover Boss" or "The Bachelor," is an authentic example of reality TV: real kids, singing real songs to an audience of millions of other kids, who vote on what they like: That's it.

My son once dismissed the show as "rigged" -- I said, yeah, by the human genome. And a healthy collective dose of raging hormones. Generally speaking, the talented kids do better than the untalented ones, and the audience notices. During seasons 3 and 4, you could tell the ultimate winners -- Fantasia Barrino and Carrie Underwood, respectively -- after just a few weeks.

Nor was I alone in that perception; the voting was so massively skewed for Underwood that the show would have lost all suspense if the actual numbers (always top secret) had leaked out. Unlike the bizarre contrivances of other such programs -- random weird contests in deserted places, a dozen women chasing one rich guy, or a boss going undercover at his own business … no one noticed the camera crew, I guess -- "American Idol" has a simplicity that dates back to Ted Mack's "Amateur Hour." It's not much different from the open mic night at a local club, or the high school talent shows kids have enjoyed, or sat through with gritted teeth, for generations.

This simplicity is the show's strength. You get to meet a group of young, talented strangers and have the pleasure of matching wits, sophistication and taste with a trio of judges on the merits of their performances. That's it -- except for the suspense of seeing the final verdict  delivered by a massive, anonymous audience of shrieking kids, most of them 14-year-old girls. The video that went viral a few years ago of audience members responding to David Archuleta's loss to the more sedate and mature David Cook gives you some idea of what the show has to deal with every week.

That audience has made some bizarre choices and some good ones, but I have never crossed over to the dark side and voted myself.

And what I've seen over the years has taught me a few things: You can be delusional about something as seemingly objective as music. The better you are, the less you need to do. And the worse you are, the more arrogant you sound. It's interesting, this last point. You could string the sound bites together -- the most atrocious singers swearing they were going to have huge careers and promising to snub Simon when they succeed; the winners all quietly humble and self-effacing. David Cook just showed up to keep his brother company. Crystal Bowersox, last year's runner-up,  had been busking a few months before, and wouldn't have been surprised -- or even that disappointed -- to be back singing in the subway again,  with her guitar case open on the platform.

Judges come and go -- we'll all miss Simon Cowell, but the heart of the show remains watching talented kids develop over the course of a season, and to see the best of them succeed. The show stays fresh because there are always new kids trying out, chasing the dream. Some are brilliant, some are mediocre; some are charming, some are annoying. But all of them are hard working and ambitious and strangely innocent in a cynical world, as is the show itself despite all its self-hype and product placement.

Every year I stumble out of the football season (that ultimate reality TV show), and ease into the gentler competition of "American Idol," with the same spark of interest, the same renewed hope: This year I'll discover someone extraordinary -- another Jennifer Hudson, another Adam Lambert -- and more often than not, it actually happens.

Will some spectacular new talent emerge this year? Like 24 million other people, of all ages and backgrounds, I'll be tuned into this cheesy but compelling American institution, I'll be watching and cringing, occasionally cheering, always hoping, always looking for the real thrill you get from a real talent coming into its own.

That's reality. And that's TV. And that combination still draws me back, no longer apologizing, 10 seasons later.