The radio host mocks a speech by Chinese President Hu Jintao in a style sure to offend, oh, 1.5 billion people 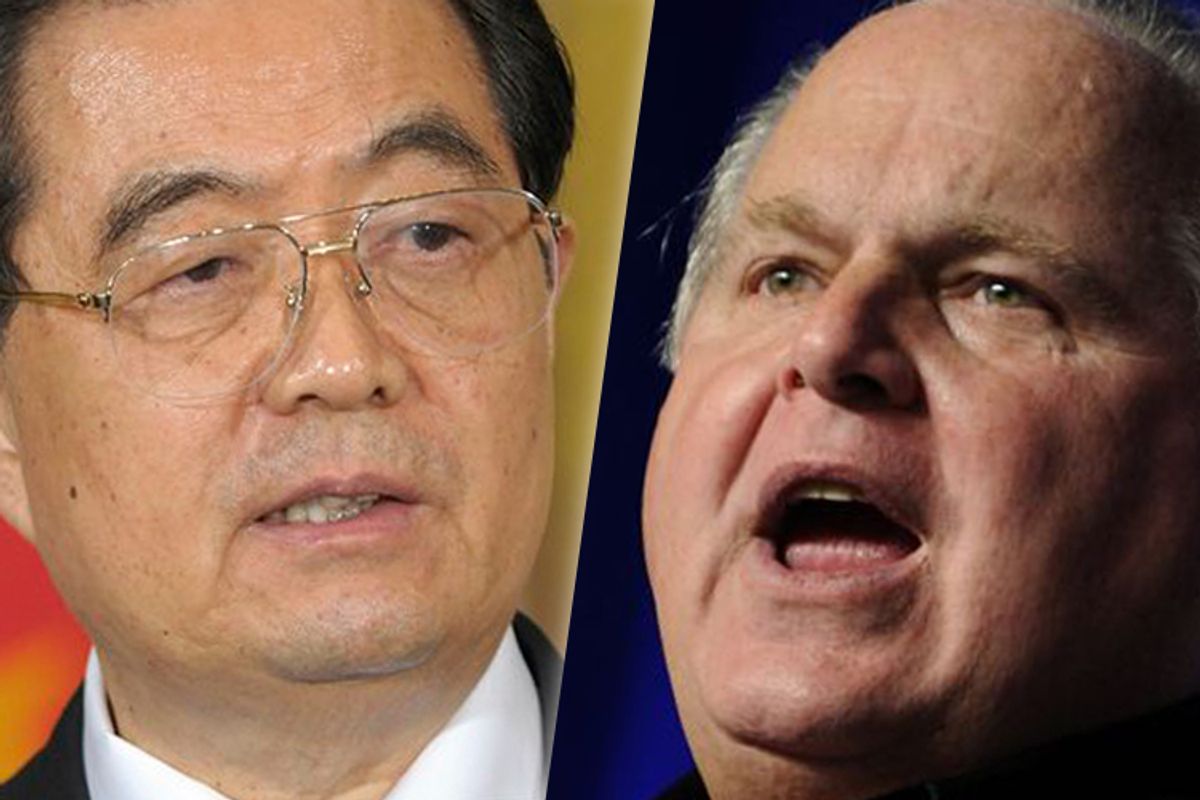 I'm not sure what is more appalling: Rush Limbaugh's 30-second-long imitation of China's President Hu Jintao speaking in Chinese, delivered on his radio show today in the most abominable display of evil Oriental stereotyping this side of Fu Manchu, or the fact that Limbaugh obviously feels his audience would relish an indulgence in racist mockery that most third grade boys would be ashamed of. It's bad enough that Limbaugh went there. But it's much worse to contemplate that his show boasts around 15 million listeners, most of whom, presumably, were not appalled.

But if you want a reality check as to exactly how low one of the most influential conservative voices in the United States can go, check it out. It's not long, but it's got lots of spunk, and is as deliciously pungent as an unmucked stable. And let's be fair, Limbaugh puts his heart in it. This isn't just a tossed off "chop-socky" -- it's a bravura performance.

I hold no particular brief for Hu Jintao. His tenure at the top of the Chinese Communist has coincided with a fierce crackdown on dissent. As China's economic power grows, so too, it seems, does its defensiveness and unwillingness to compromise, and Hu Jintao must bear at least some responsibility for that. But this is just embarrassing. I'm sure the clip is already surging through the Chinese Internet, and hundreds of millions of Chinese citizens are contemplating the fact that one of the heroes of the newly ascendant Republican party is a nativist ignoramus intent on purposely humiliating the current leader of the world's next great superpower.

I've seen a lot of tweets today bemoaning the irony that the Chinese flag has been hoisted above the U.S. Treasury today in honor of Hu's visit. What a potent metaphor to express the influence wielded by China's massive holdings of U.S. dollar-denominated assets! But if you're looking for a symbol that truly captures the state of current Chinese-U.S. relations, maybe Limbaugh's radio excrescence might be more suitable. Because what you usually find beneath that kind of "humor" is a hefty dose of fear and loathing. And that doesn't bode well for 21st century international relations.