We try 10 kinds of the new It Drink ... and breathe a little fire 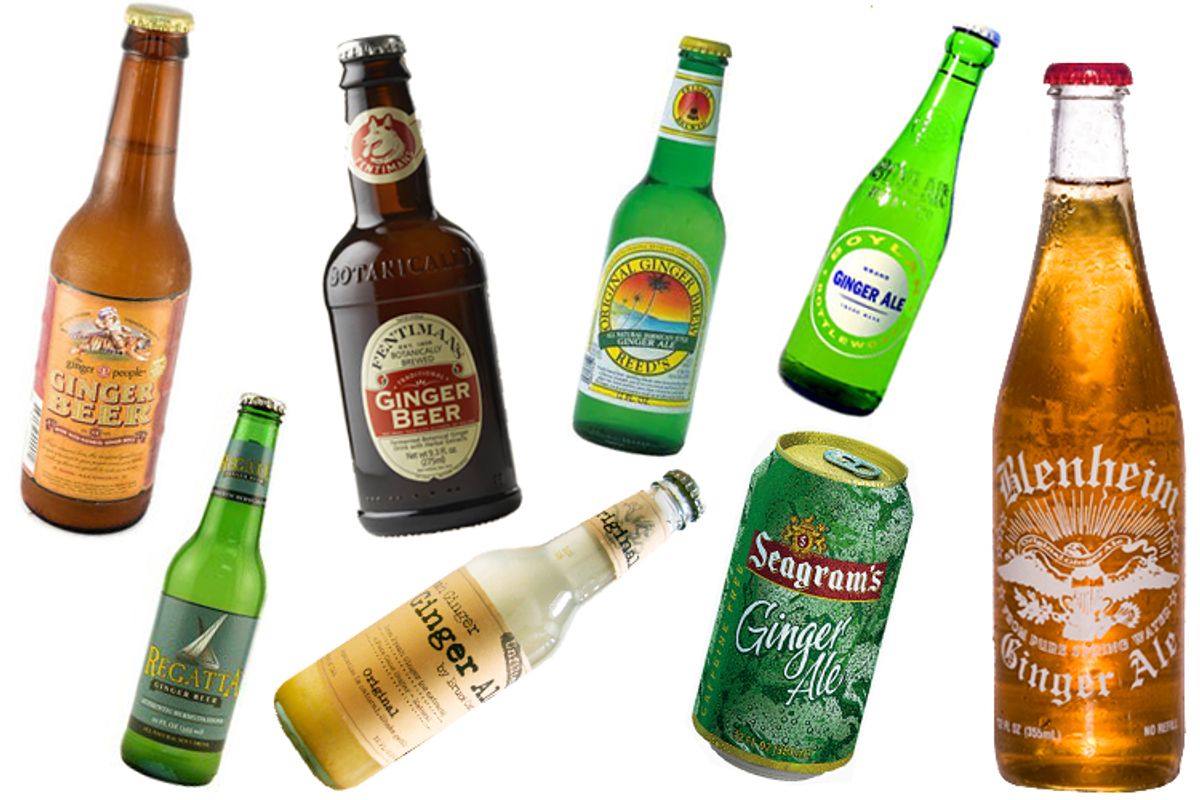 Remember when you had stomachaches as a kid, and your mom would tell you to have a glass of ginger ale? (Oh wait, did you grow up with real medicine in your house?) Anyway, that's how I got to know the classic soda, sweet and kind of bland, poured from green cans promising all the refreshing spiciness of Canada and delivering ... something so mild it can soothe a rumbling tummy. I guess it's not like they were advertising falsehoods.

But ginger ale is totally going to be the new hotness in Tastydrinklandia. I'm no trend mystic but reading the bubbles isn't hard. The pale Canada Dry type -- typified by that brand -- is what most everyone grew up with, but it's a wan version of the "golden" ginger ales that came before it and have survived to this day in the Caribbean and among stalwart soda holdouts. Golden ginger ales can pack tremendous flavor and wicked heat, the nostril-flaring steam of fresh ginger, and some even lace their formulas with essences of chile peppers for a little touch of that old capsicum magic.

Speaking of magic, there can also be the magic of fermentation at play here, the handiwork of the god Zymurgy. According to Darcy O'Neil's history of soda, "Fix the Pumps," the first recorded instance of "ginger ale" was in a Baltimore ad in 1818; it described a carbonated water flavored with ginger. But its cousin ginger beer was different; more like a beer, it was fermented and probably contained alcohol, and that's what distinguished the two for decades. But along came the teetotalers who, appalled by the very mention of beers and ales, took aim at both of them, nearly wiping one out with Prohibition and the other with, I dunno, craziness. And so now the two terms are often confused; technically ginger beer is still fermented and ginger ale is flavored carbonated soda, but often marketers will use the term "beer" just to denote stronger flavor, or just for kicks.

Today, with bar and food geeks getting all old-timey about everything, is it any wonder that the eaterati are brewing their own ginger ales and digging in the crates to find complex mixers for their drinks? So, today here at Salon HQ on a slushy, freezing-rain kind of day, we decided to warm ourselves up from the inside and taste 10 kinds of the stuff.

Well, we might as well kick the tasting off with the standard. (Disclosure: I meant to buy Canada Dry and ended up with cans of Seagrams instead, but, I mean, aren't they the same thing?) And it's perfectly pleasant, just like what Mom used to ... open. Lemony more than anything, it tastes basically like Sprite. News editor Steve Kornacki called on political history: "Decent. Normal. Eisenhower's America in a can." And superstar Alex Pareene just can't help but jet set: "I feel like I'm on a plane," he wrote in his tasting notes.

A few weeks ago, I tweeted a question: "How do you know when a ginger ale is good?" Back came many, many responses (people have their passions), but it was food writer Brandon Fox who lit it up: "When it burns the back of your throat. When your children refuse to drink it." And Blenheim, the pride of Hamer, S.C., is America's premier maker of get-that-out-of-your-kids'-hands-before-they-throw-it ginger ale.

You have to be careful with it; it's a session drink. It's like drinking pins and needles. Like drinking down a sneeze. The flare goes back up your throat, through your nose, and for a moment, you are breathing Godzilla's nuclear blast. OK, that's probably overstating it, but if, like, Godzilla had a pilot light for his nuclear breath.

And it made Kornacki cough and gag. "Could be good in allergy season," he wrote. Anyway, heat aside, it's tasty stuff, the flavor bright and acidic, like apple, and the texture is marvelous; the flavor just rides on down on a wave of bubbles. Which, of course, only makes it tingle more.

I don't like to be judgmental, but it is a very bad sign for your beverage if four out of 11 tasters use the phrase "cat food" in their notes on you. As in, "tastes like cat food mixed with marshmallows." Or "this really does smell and taste like cat food." Also: "Butt nasty," which doesn't actually say, "cat food," but I think it's implied. News blogger Adam Clark Estes wrote, "Tastes like candied yams," which is certainly more appealing than cat food, but … it's ginger ale. Fans of Reed's in our crowd assure us that this cat-foodness is some kind of aberration -- can ginger beer get skunked? So maybe this is an outlier. But ... ew.

The packaging for all the Ginger People products features very cute cartoon humanized ginger pieces, with faces and smiles, doing fun things. Swinging on vines, dancing, lounging around eating ginger candies. (CANNIBALS!) I think they are meant to evoke the feeling of the product. And so the Ginger Beer features a jolly turbaned Ginger Person riding a freaking tiger. God, I hope this stuff gets you high.

But! But! BUT! It tastes like floor cleaner, the bitter, sticky, angry goo of festering ginger. It is so intensely gingery that it threatens to wrap you up and throw you in a burlap sack. And all of a sudden I start thinking, "Ginger People ... They're people! This stuff turned people into ginger and then they made them pose and prance and take pictures of them for their sick amusement." It is horrifying. I might be high. For another perspective, Salon film critic Andrew O'Hehir called it, "a well-intentioned blend of flavors."

Bruce Cost is one of America's greatest teachers of Chinese and Asian cooking, and he's been studying these cuisines since before I was born. So the man knows ginger, and I was excited when he started putting his name on a ginger ale. And it is, in the words of one of our tasters, "awesome." Cloudy with floating-around bits of fresh ginger, the soda has just a faint bite and a muted tartness; the flavor is mellow and sweet, like curling up with a ginger candy. It's not strange, then, when Adam described the flavor as "almost chewy."

Now this is an odd bird. Of all the drinks today, this is the one that is most obviously fermented; the label says it contains a trace of alcohol. But instead of a punch in the face, your first sip will make you think of your grandma's flower closet. Wait, what's a flower closet? I don't know, but that's the first thing I thought of. It's only barely sweet, the ginger warms slightly, and there's a yeasty, beer-y umami aftertaste that lingers pleasantly. And in the middle, riding high over all of this, there are the aromas of dried flowers and spices. It's quite lovely. Although one of our tasters wrote a sort of poem of displeasure in response: "Stale old man/the taste of wood or grass." And another said it "tastes like very watery beer with a little sugar." Superstar Alex Pareene was with me on Team Fentiman's, though: "I like it! Slightly yeasty like home-brewed beer, but with balanced flavor. I'd make it myself if it weren't for the explosion hazard."

Tasting Regatta Authentic Bermuda Stone Ginger Beer, which takes less time than it does to write out its name, is like making out on a sailboat in the sun. But every once in a while, when you aim your tongue at a shoulder or a thigh, you hit a wave and all of a sudden you're licking a life preserver. What I'm saying is that you kind of have to take the good with the bad with this stuff. It's nicely gingery, a breezy drink, but there is a faint taste of plastic that bubbles up. I'm not the only one whose imagination was swept away, though. Andrew wrote: "Fruity, distinctive, genuinely is suggestive of a beach vacation. Would enjoy very much in warm weather." But that breezy quality translated as lame for some: "Could be served at a restaurant without causing a stir." And then there's our dear Kornacki, whose fantasy world is probably a lot different than mine: "If you could liquefy mulch, this is what it would taste like. But I like the smell of mulch in the spring, so this wasn't a terrible experience." What?

How can you not love a soda by a company with a name as endearingly goofy as "Good-O"? Also, I should note that this was the only one of the sodas we tasted today that came in a two-liter, not some precious not-quite-12-ounces glass bottle with fancy graphics. I mean, really, Good-O's labels they haven't changed since 1947, and so I am predisposed to liking this stuff already. And that's before we get to the jaunty note on the bottle that says, "It's Peppery!"

And peppery it is, a definite bite that snaps through the corn syrupy sweetness, and I would have been happy to guzzle this anytime, especially since it cost about an eighth of the average price of the other bottles. But others were not so charmed. Adam said, "It's not that peppery. The bottle should say, 'It's watery!'" But then again, I think by this point all our sinuses have been annihilated.

Boylan's has mastered the art of the appealing soda bottle; the painted graphics are strong and simple, the text is vaguely nostalgic, and the flavors are grown up and just bourgie enough to make food scenesters feel ok about drinking a soda. That's not a slight; I really like them. So I crack open their gorgeous green ginger ale bottle and... nothing! There's nothing there! It's tasty, a little tart, nice fizz, but after the full nuclear assault of Blenheim and others, it seems like there's no ginger here at all. But wait, there it is! Hold it in your mouth and breathe through your nose, and you get an aroma; actually a really pleasant one. There's no bite, but this is a more refreshing, less sweet, more sophisticated version of a Seagrams or a Canada Dry. I'd be thrilled to have this over ice on a hot summer night. See, doesn't that sound good? Ginger ale, over ice, on a hot night.