I can find out so much about you

After I got a job tracking down information about people on the Web, I learned just how vulnerable we really are 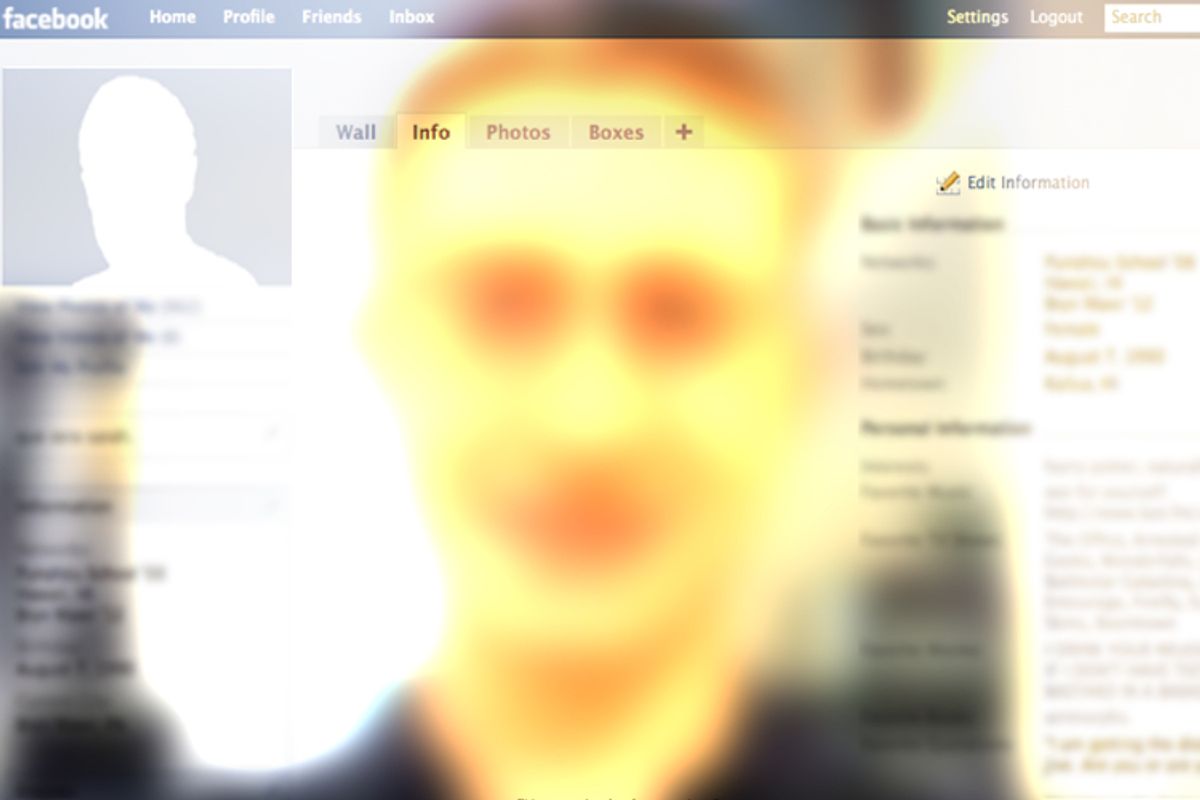 When I first heard about the shooting of Gabrielle Giffords, I jumped on a computer. Within minutes, I had the link to Jared Loughner's MySpace page. I had a probable photo of Loughner at a rally from a local newspaper. And I had a YouTube manifesto, which still had very few page views.

Then I forced myself to shut down the computer. I was, after all, at a family party.

I'd left my job at a tabloid newsroom just days earlier, and I was still white-knuckling withdrawals from the adrenaline rush of breaking-news reporting. For months, I would show up at work, get a name -- often of someone who had died the night before -- and go online, putting searches into various search engines like coins into a slot machine, until something potentially valuable popped out that I could hand over to the writer or editor on the story.

I learned that it takes less than a minute to find 20 people in Brooklyn, N.Y., talking in real time about a tornado going past their windows. I had a savant-like -- or, perhaps more accurately, creepy -- instinct for what people of interest might be writing online at any given moment, allowing me to find them via Twitter or Facebook's "Posts by Everyone" search option, a function I came to believe only exists for people with jobs like mine. It lets you essentially read walls set to private, just because you were able to guess what's on them. (No surprise that Facebook recently, and not all that contritely, conceded it has shared our addresses and phone numbers.)

Sometimes, I found useful things hiding in plain sight: the wedding photo of the Times Square Bomber on his brother-in-law's abandoned MySpace page, for example, or the name and number of the anonymous guy whose fistfight during the U.S. Open went viral on YouTube. (Thank you to everyone that morning who posted the link with comments like, "OMG, this guy hangs out at my bar!")

Plenty of what I found was noise, but sometimes there was something that provided a useful lead -- say, a killer's high school baseball team picture, with captions that led to a good interview. Any original trace of information, I learned, could be a place to start tracking down someone's bitter ex-girlfriend, or paranoid, self-published novel.

Particularly in the case of Internet-addicted 20-somethings, I often wound up with way too much information. Sifting through some young people's mountains of blog posts and photos taken with their iPhones has taken me a full workday of nonstop reading. At the end of those days, I almost felt like I knew them.

But the Web tells only a limited story, and its common wisdom is often painfully, stubbornly wrong. I've conducted enough celebrity interviews to know that even the most detailed, oft-visited Wikipedia pages have major errors. Still, I don't know that a profile gleaned from online information would be any less accurate than one created by talking to your neighbors. We hide parts of ourselves from both, or try to.

It scared me how much someone like me -- with no private-investigation experience or training, really nothing more than an Internet connection and a few hours left alone with the admonition to "find out whatever you can about this dead guy" -- could discover.

Freaked out by this epiphany, I adjusted all my social media settings, set most of my galleries to private, and tried to ensure there was at least one relatively flattering high-res photo of me publicly available, just in case. I almost tagged it, "please-use-this-photo-if-I am-hit-by-a-bus.jpeg."

Then I would reconsider my online lockdown, wondering if it was better to have more information than less. I began posting on Facebook more than once a week and even putting up the occasional picture of my kid. But then I would swing back to the other side and delete the pictures, worried that they might fall into unfriendly hands. I became the social-media equivalent of bipolar.

One manic day, I posted on my Facebook wall about a cover story I was proud of. It was lame and self-congratulatory in retrospect. In any case, a Facebook "friend" of mine mocked me. I responded. She got more aggressive.

Suddenly, embarrassingly, I was having a fight with a practical stranger on my own Facebook wall, right in front of nearly everyone I knew. In a depressive episode, I unfriended her, then went through and deleted everyone else I didn't really know. (Sorry, real friends mistakenly swept up in this purge.)

Even for people who don't live their lives largely online, what happens on the Internet can feel realer than what happens in person. A friend of mine who's a shrink tells me more than half of every session with a young person involves things that happened on Facebook.

"My ex-boyfriend changed his status to single," a distraught young woman told her, "and all his friends 'liked' it."

The problem with investing so much of our ego into our online presences isn't just that our "friends" aren't necessarily our real friends. It's also that it's incredibly easy to inflict pain on other people online, and it can be devastating to find yourself the recipient of online aggression.

Because here's the weird thing about online bullying: Humiliating someone online is way easier than doing it face-to-face. Often, it feels like nothing at all. But being humiliated online can feel worse than being mortified in real life, because it can stay in public view for years, because it can go viral, and because anyone with a laptop can see your embarrassment, and comment on -- or, god forbid, "like" -- it.

No story brought the issue of online humiliation and online identity into relief for me like the case of Tyler Clementi, a gifted teenage violinist, who famously killed himself after roommates allegedly live-streamed a private moment he shared in his dorm room with another man.

I was assigned to the Clementi story, too: Shortly after the police released his name, I was reading his favorite quote on his info page: "What do you get when you kiss a guy / You get enough germs to catch pneumonia," a lyric to the song "I'll Never Fall in Love Again" from the musical "Promises, Promises." In his profile picture, he smiles gamely into his webcam.

It broke my heart, as did learning from conversations with his real-life friends that the chatty, enthusiastic online figure I'd found was shy and private in person. I had a hard time reconciling the polite, quiet guy described by friends with the extroverted persona I found online -- the person who eagerly turned to the Web for advice from strangers on everything from how to handle his pet hermit crabs to, a few years later, what to do about his dorm room betrayal.

In a way, Clementi's story is the oldest one on the Web: the guy who learns that the Internet will not keep his secrets. More than that, though, he is a reminder that we all maintain a wall between what we want people to know and what we don't want them to know. Many of us depend on that wall more than we think we do.

The supposed overexposure of young people, the "sexting" and the bong photos and all the rest that suggest we are too dumb to realize that human resources people can Google, too, may not be so stupid after all. Maybe it's a modern-day defense mechanism, a fortress of voluntary exposure. The more stuff we put out there, the less of what other people put out there about us dominates our online identity.

Why did I write so many personal essays in my 20s about the sexual and social encounters that made me most uncomfortable? Because I wanted to control the narrative. As David Letterman proved when he came out as an adulterer, shamelessness has a way of making you relatively un-blackmailable.

But it's really hard to know whether the best defense is to hide or to keep flinging flattering Twitpics of ourselves into the void. Is there a way to hide, anyway? To guarantee enough approved head shots will choke out the photo someone with a camera phone snapped of you asleep on the train with a rat crawling onto your lap? Just think of all the people tracked down by the vigilante hackers of 4Chan (far better online researchers than I), or by the FBI, who I assume knows how to use more than just "Posts by Everyone."

When I typed Jared Lee Loughner's name into WebMii shortly after the shooting, I learned that bloggers (like this one)  already appeared to be on the case. Plenty of people were already in possession of screen grabs of his "goodbye, friends" post on MySpace (note: In my experience, the craziest of crazies are usually still on MySpace rather than Facebook), the photo of the gun on top of the history textbook, and his psychotic YouTube videos.

Maybe that's the moral for those of us who have Facebook pages and other online profiles: to put any stock in our online identities is wrong. The creations we, or others, build up around our user names and profile pictures are shadows -- sometimes a close approximation of the truth, sometimes deeply distorted by ourselves or others, sometimes so appealing to us we prefer them to the messy realities of our flesh-and-blood selves. But they are not real.

What is real: our bodies, our families, our friends, our co-workers, the thoughts and feelings we have that never see a computer screen. What we do in the world is real. There's a song from 2000 by the band Le Tigre: "Get off the Internet." Sample lyrics: "Where are my friends? Get off the Internet! I'll meet you in the street." I don't think it's practical to really get off the Internet, but I do think it's possible -- and psychologically necessary -- to invest it with less power.

But then I found public photos posted online years ago by a relative, and there she was in photo after photo, untagged, smiling and without makeup. She was at a relative's wedding, mugging with her father. She was at a restaurant, smiling on her sister's shoulder. Maybe those photos aren't any more "her" than the vixen ones. But to me, they felt more real. Maybe it's because she'd tried to keep them secret.