After their Chinese guests requested a "quintessentially American" meal, the White House came up with this? 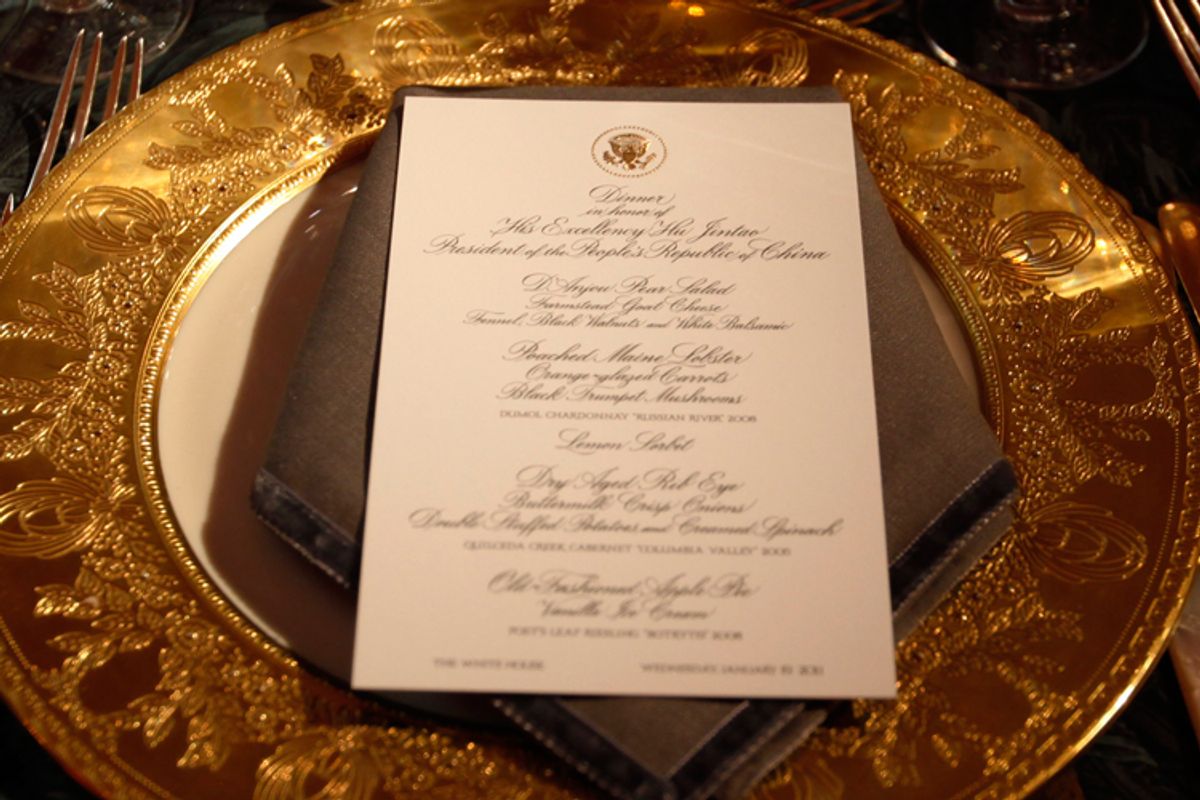 A table setting for the state dinner hosted by President Obama for Chinese President Hu Jintao.
--

So here we have the menu for tonight's White House State Dinner, in honor of Chinese President Hu Jintao. And it's kind of tragic.

State dinners are absolute banquets of symbolism, with everything from the décor to the entertainment to, of course, the food packed with cultural signifiers. And so, when Obama Foodorama reported that the Chinese delegation explicitly requested a "quintessentially American" dinner, my nerves started firing: What dishes would the White House set forth as the markers of our country? What will bear the standard of our nation, one fed by thousands of crazy blood lines, from Native Americans to the colonists to the slaves to the waves and waves of amber- and other-toned immigrants?

If you guessed steak and potatoes, congratulations. For being right, and for living in Norman Rockwell's white-bread America. Sigh. But what about the Americanness of the rest of the menu?

Well, black walnuts are actually native to the United States, so that's pretty cool. And white balsamic is, by most accounts, not at all related to actual Italian balsamic vinegar, but was probably invented by marketers somewhere in New Jersey, so that counts too, I guess.

Maine lobster is pretty sweet, too, since it's also a species that's actually native to the U.S. -- it's Latin name is Homarus Americanus, which, now that I think about it, may end up being the name of my first child -- and it's distinguished from most other lobsters by its big, meaty claws. You love lobster claws, don't you? USA! USA!

Look, I'd be happy to be sitting in front of this dish. I have nothing against it. But to represent the mosaic that is America? What, did they run out of burgers and fries? Are the servers wearing gingham too?

Yes. Yes, the servers are wearing gingham. And they are all moms. Also, perhaps there will be a little baseball game for the guests' entertainment.

What kills me about this "quintessentially American" menu is how it looks compared to the first-ever Obama White House State Dinner. (Yes, the one with the infamous party crashers.)

In November of 2009, honoring Indian Prime Minister Manmohan Singh, the White House threw a joyous culinary spectacle. That dinner featured, for the first time in White House history, a guest chef: Marcus Samuelsson, an Ethiopian native, adopted and raised by Swedes, who became a naturalized American citizen and one of the most prominent chefs in the country. And the menu itself, as reported by the New York Times, included:

a mix of Indian and American favorites, including some African-American standards. Collard greens and curried prawns, chickpeas and okra, nan and cornbread were served to the 320 guests, who started off with arugula from the White House garden and finished up with pumpkin pie tart.

So: dishes that carry with them the flavors and history of diverse lineage, of foods high and low, and bent seamlessly to give a nod toward the homeland of the guest, prepared by an immigrant chef who explodes our notions of what being black in America might mean ... and it's the steak and potatoes that gets called "American"? It breaks my heart. It's not that this menu isn't lovely; it is, and I'm sure it's cooked splendidly. But I just wish the version of America they're serving on the plate would look more like the vision of America as we are today - a nation that revels in e pluribus unum.

But maybe I'm making too much of this. I mean, hey, the White House chef (who happens to be the first woman to hold that title) is Cristeta Comerford. She's an immigrant from the Philippines.