What 25 tons of explosives will do to an Afghan village 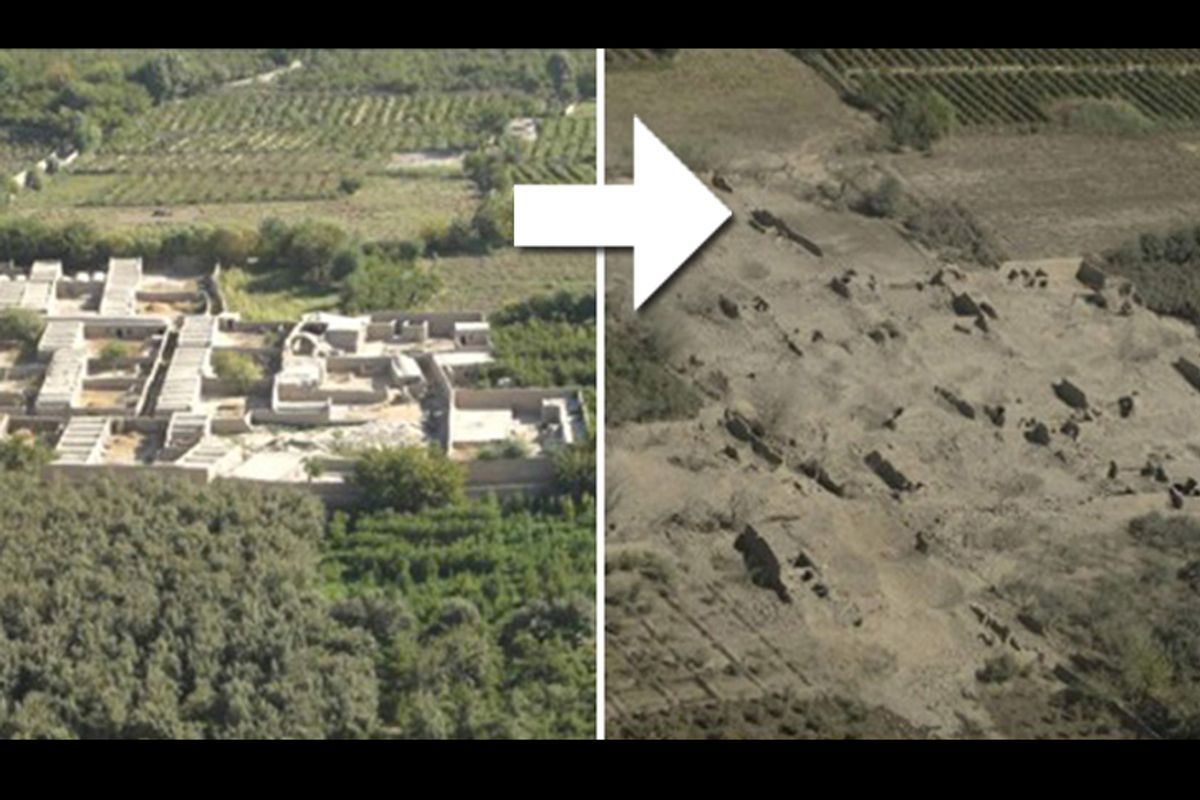 These aerial photos show the Afghan village of Tarok Kalache before and after American troops dropped nearly 25 tons worth of bombs and rockets on the area.
--

Last October, an American fighting unit in Afghanistan reduced an entire village to dust in minutes. Nestled in the fertile Arghandab Valley, Tarok Kolache had become a Taliban stronghold and was proving a difficult fortress to penetrate. The affair must have really irked the American commander, Lt. Col. David Flynn, because after two failed attempts to take the village, he just to wiped it off the map.

Don't worry. Nobody got hurt. Well, nobody who wasn't a member of the Taliban, according to Paula Broadwell, a blogger-friend of the U.S. Army.

According to Broadwell's dispatch in Foreign Policy, Flynn's unit had been "licking their wounds" after failed attempts at taking the village. Homemade bombs, improvised explosive devices (IEDs), and gunfire rained onto American troops any time they got close, and so Flynn decided to open a gateway into the village with bigger bombs dropped from airplanes.

The plan was for one team to clear a 600-meter path with MICLICs from one of his combat outposts to Tarok Kalache. "It was the only way I could give the men confidence to go back out."

On October 6, Flynn's unit approved use of HIMARS, B-1, and A-10s to drop 49,200 lbs. of ordnance on the Taliban tactical base of Tarok Kalache, resulting in NO CIVCAS.

Let's unpack those acronyms. HIMAR stands for High Mobility Artillery Rocket System. Those are basically rocket launchers on wheels. B-1 refers to the Rockwell B-1 Lancer, an agile bomber. A-10 refers to the A-10 Thunderbolt II, also known as the "warthogs from hell." And when Broadwell says "NO CIVCAS" she means no civilian casualties.

I'm hardly a military expert, but this seems like a stretch. Nearly 50,000 pounds of ammunition, delivered by some of the military's most aggressive bombers, just sounds like a lot. That sheer magnitude of force didn't just "clear a 600-meter path" for the troops to sweep the village. It cleared the entire village.

After her original blog post stirred some concern online, Broadwell -- who is also a West Point graduate -- defended the commanders actions. As Wired points out:

As she clarified in a debate on her Facebook wall, “In the commander’s assessment, the deserted village was not worth clearing. If you lost several KIA and you might feel the same.” But without entering Tarok Kolache to clear it, how could U.S. or Afghan forces know it was completely devoid of civilians?

As Broadwell tells it, the villagers understood that the United States needed to destroy their homes -- except when they don’t. One villager “in a fit of theatrics had accused Flynn of ruining his life after the demolition.”

And about those Afghans who lost their homes -- err, entire village: Sure they are pissed about the loss of their mud huts." But the mission was a success, overall, Broadwell said.

Team Patreaus responded to the hullabaloo today. "We had to reduce the city because it was rigged," said spokesperson Col. Erik Gunhus told Wired. He insisted that they were "forced into it" and reiterated that no civilians were harmed.

Still no word on how "clear a 600-meter path" actually means "destroy an entire village," though.