The troika at the top reorganizes, and everyone wonders what it means 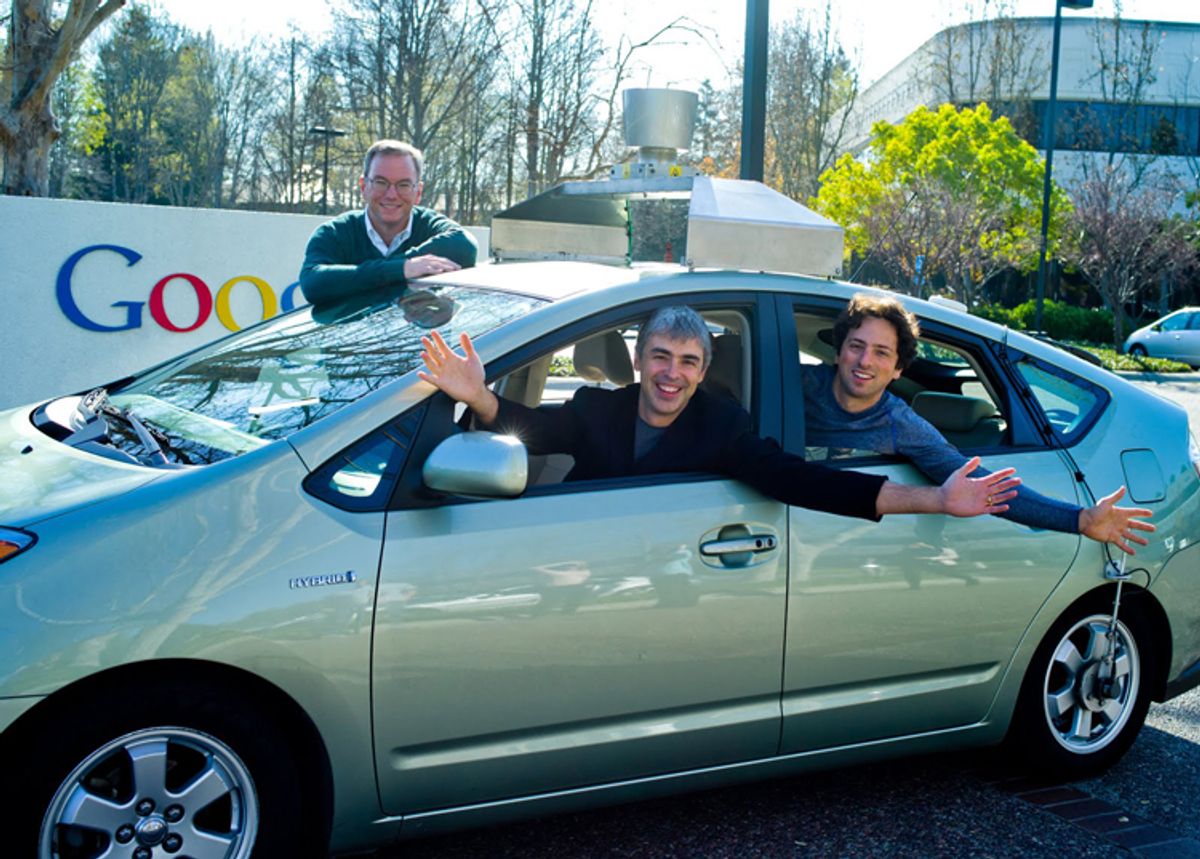 Page is in the driver's seat. Brin is in the back seat.  Schmidt is outside the car, a specially modified Toyota Prius that drives itself.

The photo is part of a blog post announcing a move that took everyone outside the company by surprise; Schmidt is kicking himself (or was kicked) upstairs into the role of executive chairman, and is being replaced as chief executive by Page. Brin's new role will be simply co-founder.

This is a big deal. Changes in Google leadership -- the Schmidt-Page-Brin troika has been intact for the past decade -- are exceedingly rare. What this one means for the long run is unclear, obviously, though that isn't stopping a torrent of speculation and instant analysis.

Schmidt came to Google to provide what everyone called, only partially in jest, adult supervision. He's done a remarkable job by any reasonable account: moving the company forward, initially in its buildup as the powerhouse Internet advertising business it became and still remains. He guided Google through an initial public offering that broke almost every rule that Wall Street wanted the company to follow. In particular, Google sold its initial stock via a Dutch auction, and it explicitly told investors that it was in business for the long term, with long-term thinking, not quarterly knee-jerking, central to everything it did. Under Schmidt, Google created two classes of stock that ensured the founders' ability to make strategic decisions, as opposed to the expedient ones.

In one sense Google is going back to the future. Page was the initial CEO before Schmidt came aboard as chairman and then later as CEO. It's important to remember, however, that  Page's days in the top job were nothing like what he'll face now.

Google faces serious pressure on several fronts. One is its unpersuasive responses to Facebook and Twitter, among other more recent and powerful entrants in the Internet space. Another may be even more important: the growing perception among search users that Google search results are not as good as they used to be. (In my own recent searches, I found that Microsoft's Bing search engine sometimes gives me better results in areas where Google used to be a default choice.)

Founders rarely return to the role of CEO, though it's happened several times in prominent Silicon Valley companies. Most famously, Steve Jobs took back the reins at Apple in the 1990s; he's moved since then from triumph to triumph. It didn't work as well when Jerry Yang took over as Yahoo CEO several years ago, when the company was moving deeper and deeper into trouble, and his tenure did Yahoo little good.

Can Page lead this company? Clearly Schmidt believes so, and so does the board of directors. Investors in after-hours trading boosted the stock price, but whether that had more to do with Google's blockbuster earnings report today remains to be seen. It has to be somewhat unsettling for investors to see any change of this magnitude.

For his part, Schmidt plans to spend more time on business development, governmental and other affairs for which he is especially well-suited. He's always seemed more comfortable in a business suit in the halls of power, corporate and government, than either of the two founders. I won't be surprised if he takes a formal government role in the relatively near future.

Brin won't be lounging around. He's always seemed the more visionary member of the team, and maybe his change in role will give him more time to think strategically.

Google matters. It's central to so much of what so many of us do in our online work and play that any move like this is noteworthy.

Companies evolve, and people change. Whether there's an as-yet-untold back story to today's moves -- and one almost can't help believing there must be -- Google's future has been growing more murky in recent times. It will be Larry Page, more than anyone else, who decides whether the company's best days are ahead.