Why do we admire a president who did so little?

A presidency that was marked by stalled domestic initiatives, and that ended in tragedy, began 50 years ago today 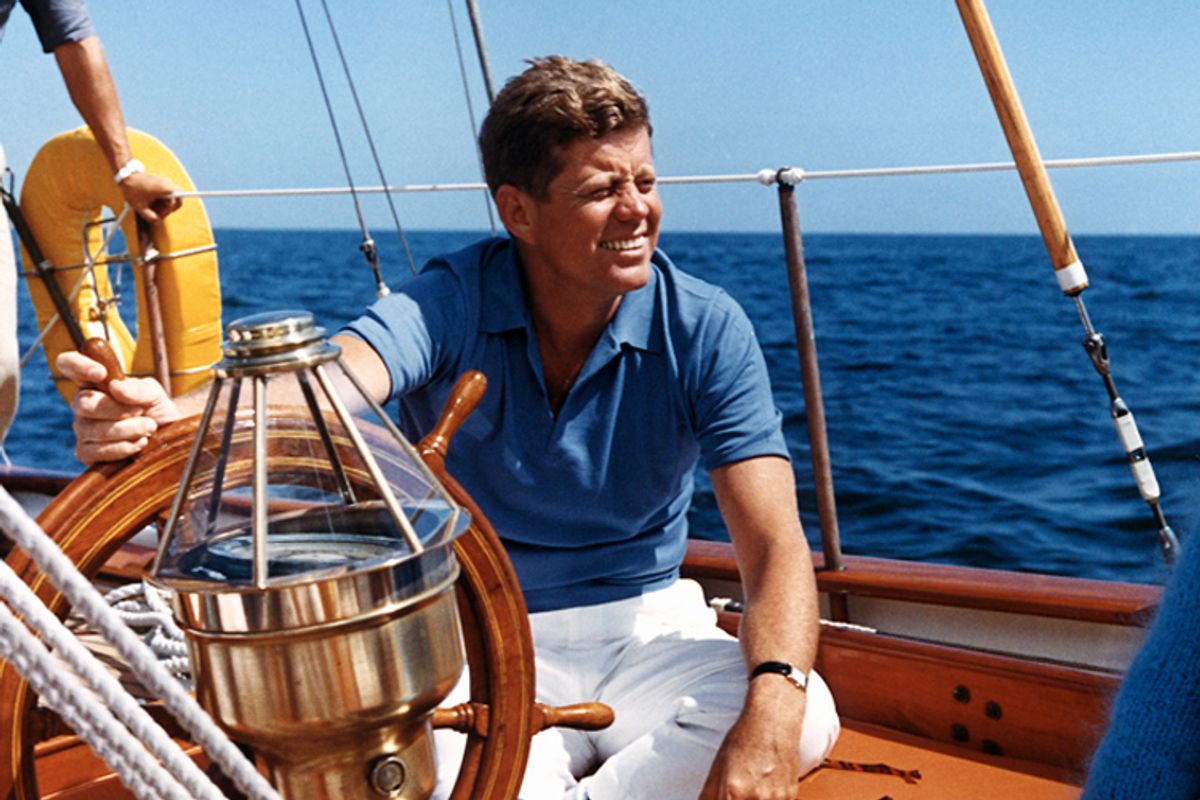 Every year since 1990, the Gallup poll has asked Americans to assess all the presidents since John F. Kennedy. And every year, Kennedy comes out on top. In the most recent survey measuring the popularity of the nine presidents since JFK, 85 percent said they approved of Kennedy’s leadership; Ronald Reagan was second with a 74 percent rating. Predictably, Richard Nixon came last with only 29 percent; even George W. Bush, who rivaled Nixon for the dubious distinction of least popular, commanded 47 percent approval. And poor Lyndon Johnson, who did more to change the country for the better with his civil rights, Medicare and aid to education laws than any president since Franklin Roosevelt but who remains burdened by Vietnam, stood just ahead of Bush with 49 percent.

The great mystery is why Kennedy, who served for only a thousand days and failed to persuade the Congress to pass any of his major domestic initiatives on taxes, civil rights, health insurance for seniors, and aid to education, enjoys such extraordinary public regard. True, his brilliant handling of the Cuban Missile Crisis resolved the greatest Soviet-American confrontation threatening a nuclear disaster in the 45-year history of the Cold War. Moreover, his negotiation of a nuclear test ban in the atmosphere was a giant step forward in limiting the arms race. But his failed assault on Fidel Castro’s Cuban government at the Bay of Pigs and his expansion of the U.S. military’s advisory role in Vietnam and the toppling of the Ngo Dinh Diem government, which many see as the preludes to Johnson’s war, add to the puzzle about Kennedy’s high standing.

It is also arguable that Kennedy would have reached some kind of rapprochement with Castro’s regime and that he would have avoided the sort of escalation of the conflict in Vietnam that Johnson supported. At least, there is pretty compelling evidence demonstrating that Kennedy was interested in ending the Cuban-American estrangement and was intent on leaving it to the Vietnamese to settle their national conflict.

Yet none of these events and non-events seems to make much difference in shaping Kennedy's image. As someone who has more than a passing acquaintance with most of the 20th century presidents, I have often thought that their accomplishments have little staying power in shaping popular views of their leadership. How many people know that Theodore Roosevelt established the Food and Drug Administration, or that he was the architect of the country’s system of national parks, or that he built the Panama Canal and arranged the Portsmouth Treaty ending the Russo-Japanese war? Likewise, Woodrow Wilson's creation of the Federal Reserve or Franklin Roosevelt’s building of the Tennessee Valley Authority (TVA) are probably too distant in time to account for public regard of these presidents as great leaders.

So what elevates the Roosevelts, Wilson and, more recently, Kennedy and Reagan to enjoy greater public approval than that of almost all their presidential predecessors and successors?

Kennedy’s assassination has surely created a lasting attachment to his standing as a beloved president. But this doesn’t explain the almost worshipful attitude so many Americans have toward him. Like Kennedy, William McKinley was a popular president, winning a decisive reelection victory in 1900. But 47 years after his 1901 assassination, not many people remembered him or considered him an important president.

Kennedy’s magic has largely to do with public desire for a heroic, inspiring leader. Of all the recent presidents, only Kennedy and Reagan satisfy that yearning. Johnson, Nixon, Ford, the two Bushes and Clinton not only fall short of that mark, they have left the country feeling angry and doubtful about America as an exceptional nation. Unlike the idealized images of Kennedy and Reagan, these presidents are remembered as deeply flawed; indeed, men who sullied the highest office with their personal weaknesses and poor judgments.

Never mind that Kennedy hid serious health problems from the public and risked his presidency by reckless womanizing. The public seems largely indifferent to these post-presidential revelations.

Kennedy and Reagan made Americans feel better about themselves: Kennedy with his call to advance to a New Frontier, to ask not what your country can do for you but what you can do for your country, and his promise to put a man on the moon, demonstrating once again the country’s innovative genius and talent for meeting the greatest challenges; Reagan by restoring feelings of hope and national self-regard. "Morning in America" and "The pride is back" were more than catchphrases; they fostered feelings of self-respect.

Like T.R.'s bully pulpit and FDR's fireside chats, Kennedy’s press conferences, which underscored his personal charm, wit, youth and intelligence, and Reagan’s talents as the "great communicator" are enduring parts of their legacies.

Unlike Washington and Lincoln, whose reputations rest respectively on building and preserving the nation, Kennedy and Reagan, to borrow a phrase from the historian Richard Hofstadter, were and remain the master psychologists of the middle classes.