A theory on the real reason for Obama's comeback 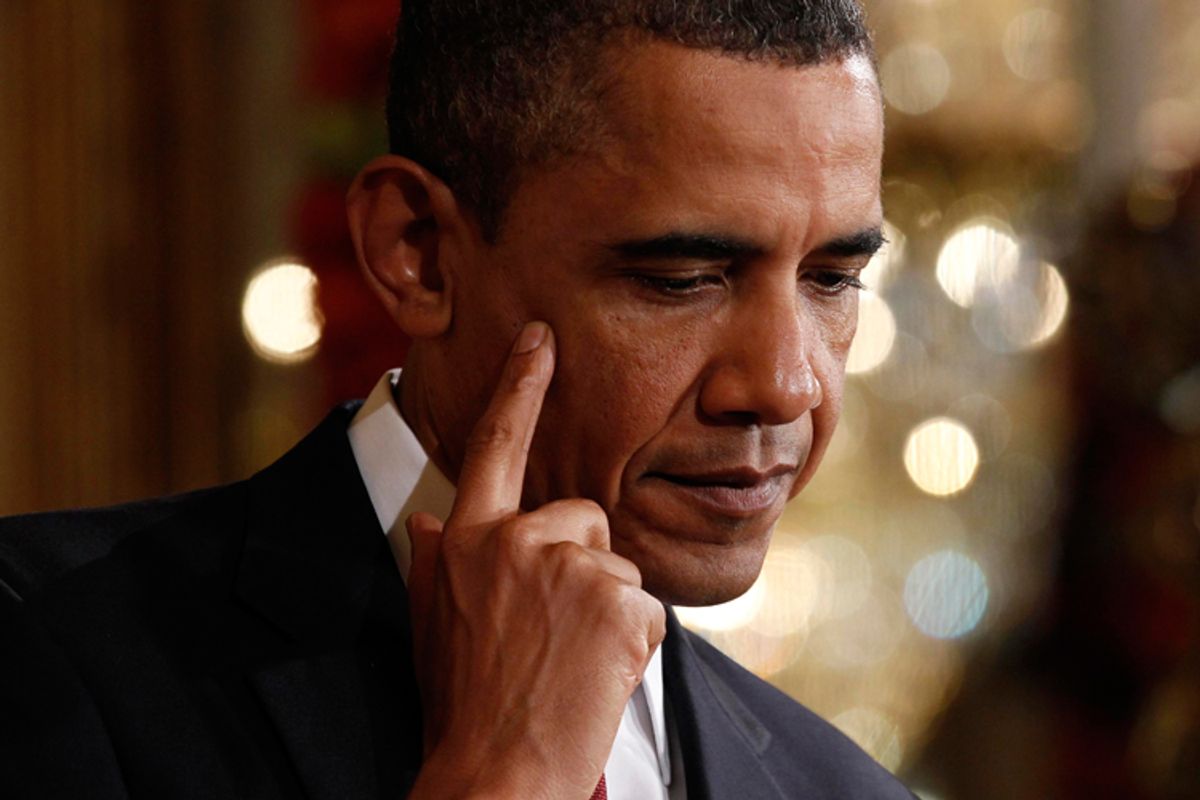 “I think that this increase in his job approval is very important,” says McInturff, the GOP pollster. “At the same time, these kind of rises have been transitory,” he adds, referring to former President Clinton’s immediate -- but later fleeting -- bump in approval after the 1995 Oklahoma City bombing.

Point taken. I've been hesitant to say much about Obama's recent polling gains, mainly because I've figured that the Tucson tragedy was bound to produce some kind of rally-around-the-flag effect. Remember that even Jimmy Carter, at perhaps the lowest period of his presidency, saw his numbers rise when he authorized a futile hostage rescue mission in the spring of 1980. But as my colleague Joan Walsh noted last night, the improvement in Obama's numbers actually began before Tucson, back in December, around the time Obama brokered his tax cut deal with Republicans and then quickly won passage of DADT repeal, the START treaty, and a 9/11 first responders bill.

In this sense, I think McInturff's cautionary parallel is slightly off. It's not the post-Oklahoma City period of Clinton's presidency that we should keep in mind; it's the winter of 1993-'94, when Clinton scored posted what were then the most impressive poll numbers of his presidency -- only to seem them crash and burn within months.

We tend to look back at the first two years of Clinton's presidency as one long political disaster: He bungled nominations, went back on his middle class tax cut pledge, botched healthcare, stepped on one public relations landmine after another, and was punished with dismal poll numbers and a brutal midterm drubbing. In the version most are familiar with, this Time magazine cover from June 1993 -- five months into Clinton's first term -- pretty much tells the story of his first two years in office.

In reality, Clinton's first two years can be divided into several distinct phases. Basically, they began and ended with bad news and horrible poll numbers, but in between, there was actually a period when he was seen as a successful president by the media and by the general public. This period came in late '93 and early '94. Before then, Clinton had been dogged by declining poll numbers and a popular perception that he was in over his head as president. His image began to change in late '93, though, after a string of successes: passage of the North American Free Trade Agreement and the Brady Bill and successful presidential intervention to avert a Thanksgiving airline strike. Plus, there was encouraging economic news -- the recession that cost George H.W. Bush his job had officially ended in 1991, but only at the end of '93 were Americans starting to feel that the worst was behind them.

Thus, a December '93 poll from the Los Angeles Times gave Clinton a 55 percent approval rating -- his highest mark since the earliest days of his presidency. Other outlets found similar results, and the numbers remained steady throughout the winter. A late January NBC/WSJ poll actually found Clinton's approval hitting 60 percent. It was in this climate that on March 3, 1994, the Washington Post ran a story from Dan Balz that set the stage for that year's midterm elections this way:

On the eve of the first primaries of 1994, Americans say they have more confidence in Democrats than Republicans to handle the country's biggest problems, including the issues of crime and the deficit, where the GOP traditionally has held an advantage, according to a new Washington Post-ABC News Poll.

The poll also found that President Clinton continues to enjoy among the highest approval ratings of his presidency and that a plurality of those surveyed say the economy is getting better. Taken together, the findings provide gloomy news for Republicans and suggest that if trends hold, Democrats could avoid the kind of losses normally suffered in midterm elections by the party that holds the White House.

Eight months later, of course, Democrats lost 52 seats in the House, eight in the Senate, and a boatload of governorships and state legislative seats -- the most thorough Republican victory in decades -- and Clinton was written off as a dead president walking. The late months of 1993 and the early months of 1994 now stand as Clinton's forgotten winter.

I believe this period of Clinton's presidency tells us something about the impact of, for lack of a better term, the noise in the air. Clinton suffered numerous self-inflicted wounds in his early months on the job, but he also faced unified and unrelenting opposition from Republicans -- just like Obama faced in 2009 and 2010. Remember that Republicans filibustered Clinton's stimulus bill to death in April '93 and provided zero votes in the House and Senate for his first budget that summer, which they derided as "the largest tax increase in the history of the world."

But there was a break in this GOP unity in the late months of '93, particularly on NAFTA, which passed with significant Republican support (and significant Democratic opposition). The NAFTA debate was no ordinary congressional debate, either. Al Gore's debate with NAFTA foe Ross Perot that November netted CNN some of its highest ratings ever. This affected the noise that the average voter heard about Clinton. For months, every Republican/conservative voice had been blasting the president for advancing a dangerous, radical agenda; suddenly, many of those voices were supporting him. At the same time, voters surely noticed that some Democratic/liberal voices were expressing intense displeasure with the president. It's not a coincidence, I think, that Clinton's polling gains in the late months of '93 came among voters who considered themselves moderates.

Obama seems to be enjoying a similar moment now. There's been some good economic news lately, which is surely a factor. But since December, the noise in the air has been different, too. Republicans gave Obama cover on his tax deal (a deal that, polls found, was broadly popular with the general public), and plenty of them backed him on START, too. And while DADT repeal didn't enjoy much GOP support, a parallel can be drawn to the Brady Bill Clinton signed in '93: Both enjoyed broad national popularity, and even significant support among Republican voters.

I've written over and over about economic conditions being far and away the chief factor in a president's popularity. But the closer I look at Clinton's own experience in '94, the more I realize they aren't the only factor. The economy wasn't experiencing explosive growth in '94, but it wasn't exactly struggling, either. Unemployment dropped to under 6 percent the month before the midterms; it had been nearly 8 percent on Election Day '92. And yet, in this climate, Clinton's approval ratings were low and his party was hit with devastating midterm losses.

I can't help concluding that "noise" had something to do with this. After all, the strong numbers that marked Clinton's forgotten winter melted away when Republican opposition to his healthcare plan intensified. Unlike these past two years, the GOP began Clinton's presidency resigned to the idea that there would be a major healthcare overhaul. Sure, plenty in the party were opposed to doing anything, but party leaders believed that they had to act, or risk a backlash from the general public. In early '94, Bob Dole was still looking to cut a deal with the Clinton White House. It wasn't until late in that winter, as a compromise proved elusive and Republicans began feeling emboldened to walk away, that public opinion turned against Clinton's plan. The rest is history. The point is: The "noise" voters were hearing about healthcare in 1993 and 1994 seemed to turn them against Clinton and his plan when Republicans and conservatives unified in blanket opposition to reform.

This may all read like one big argument for "centrism." But that's not really my point. I don't think that passing NAFTA helped Clinton because voters were happy to see bipartisanship in action. But the noise that resulted from that bipartisanship -- Republicans praising Clinton instead of calling him a radical -- did make them feel more comfortable in Clinton's leadership, and less inclined to believe that he was moving the country in an "extreme" direction. My guess is that the same basic phenomenon is at work with Obama right now.