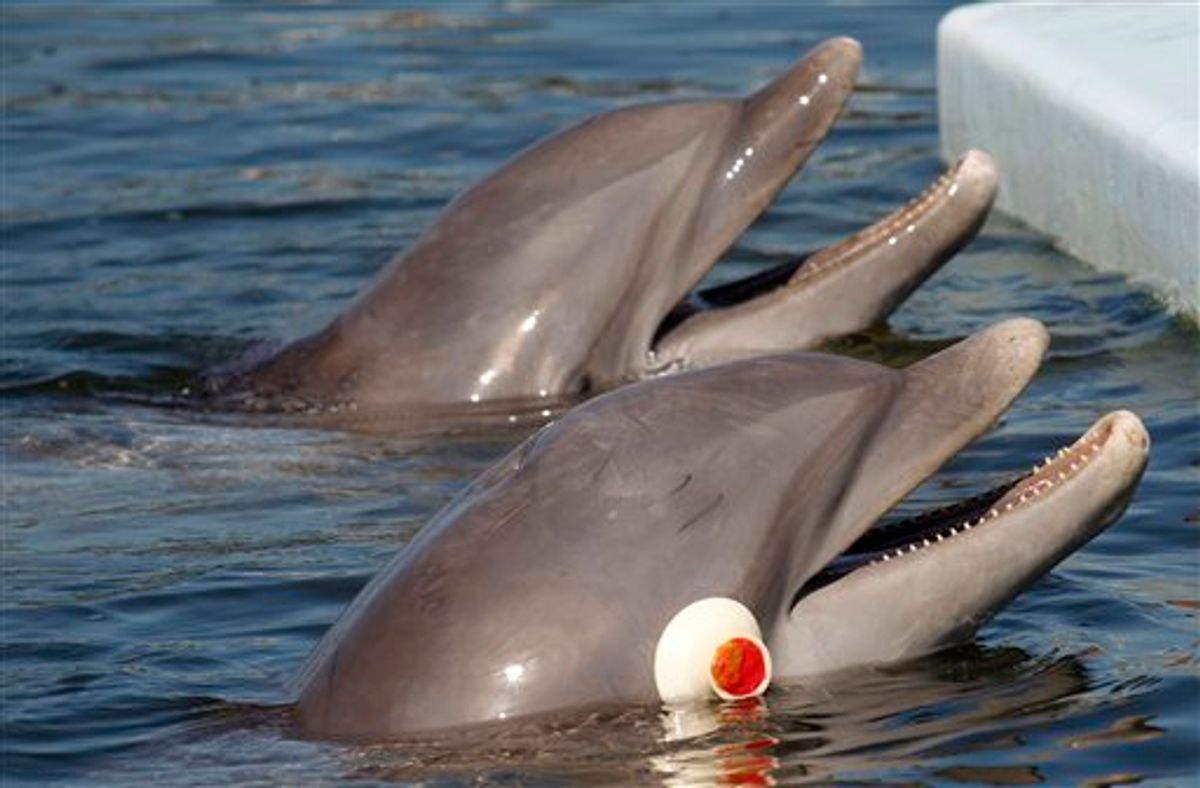 In this Jan. 11, 2011 photo, an Atlantic bottlenose dolphin named Tanner, foreground, imitates the behavior of another dolphin, Kibby, rear, at the Dolphin Research Center in Grassy Key, Fla. During the study Tanner, who wore eyecups to block his vision, was able to copy the behavior of the other dolphin without the use of vision. (AP Photo/Wilfredo Lee) (AP)
--

In a lagoon in the Florida Keys, trainer Emily Guarino blindfolds a male dolphin named Tanner with special latex goggles. "You ready, Tanner?" Guarino asks the young dolphin, waiting beside his companion Kibby.

At a command, another trainer gets Kibby to say 'hello' by flapping his fins on the water, splashing noisily in the enclosed lagoon at the Dolphin Research Center here, which houses 22 dolphins and is one of the leaders in dolphin cognitive studies.

"Can you imitate what Kibby is doing?" Guarino asks Tanner. Within seconds, Tanner is splashing "hello" -- a seemingly extraordinary feat given the blindfolded dolphin appears to only be using sound to perceive and imitate the actions of his fellow dolphin.

It turns out dolphins are master imitators that somehow can "see" their environment despite blindfolds. But exactly how such a dolphin can mimic another's action is a matter of ongoing scientific study.

Dr. Kelly Jaakkola, director of the nonprofit marine mammal research center, said the research to better understand dolphin intelligence will surely help further their conservation. She said such study may also be helpful in better grasping the complexities of human intelligence.

"It's human nature to care more about animals we perceive as intelligent. So the more we can showcase that intelligence we give people a way to connect, to care and therefore conserve," she said.

Just how blindfolded dolphins can pick up on the actions of other dolphins -- whether through echolocation, sonar or other means -- is still unclear. Echolocation refers to the sounds dolphins and other animals naturally emit to locate objects and navigate.

"Dolphins have this ability to echolocate by sonar, very similar to bats. And so one possibility is he is echolocating on that and he is 'seeing' the behavior with sound," Jaakkola said. "However there is another possibility as well. Maybe he's recognizing the characteristic sound of the behavior like if I asked you to close your eyes and I clap my hands, you would still be able to imitate that by recognizing the characteristic sound."

The study used three dolphins for its tests: Tanner was always the blindfolded subject and A.J. and Kibby served as demonstrator dolphins. The study titled "Blindfolded Imitation in a Bottlenose Dolphin" is published in the International Journal of Comparative Psychology (Volume 23, No. 4).

Tanner, who was previously trained in wearing the opaque latex eyecups, already knew how to imitate other dolphins' behaviors without blindfolds on. Nearly every time his eyes were covered, Tanner was able to imitate his playmate Kibby's actions, the researchers reported.

The study tested 19 motor and eight vocal behaviors, from waving a fin, to bobbing up and down, to spinning and even giggling. Training took numerous trials and, at first, involved only one eye cup used to blindfold Tanner. Researchers then moved on gradually to two eyecups. After the trials, trainers and researchers tested each behavior twice while Tanner was sighted and blindfolded. The study was spread over 19 sessions in 11 weeks.

Since researchers sought to focus on whether dolphins can imitate companions while blindfolded, all the behaviors used in the study were already known to the dolphins.

Previous dolphin studies have shown dolphins can copy companion's whistles and motor behaviors, as well as computer-generated sounds. Dolphins also have a capacity to copy humans to some extent, according to Jaakkola.

The results are not at all surprising to Dr. Robin W. Baird, a research biologist at Cascadia Research Collective based in Olympia, Wash.

"This actually demonstrates that they are able to know what is going on in their environment at a different level than what they can just see," said Baird, who works mostly with wild sea animals -- such as dolphins, whales and seals -- and did not participate in the study.

Janet Mann, a professor of biology and psychology at Georgetown University, read the study but wasn't involved in the research and said it's still unclear if Tanner was echolocating or one of the other dolphins.

"They didn't localize who was echolocating, so we could not rule out that it was the model and not Tanner," she said. She also said the authors didn't consider so-called "kinesthetic cues."

"That is, if someone was twirling in the water next to you, then you might be able to tell by the water movement that they were twirling or could feel the bubbles if they were kicking away from you," she added.

It was the same question raised with Clever Hans, a horse which in the late 19th century in Germany was said to be able to spell or solve any math problem by stomping his hoof with the answer. Later studies determined the horse was receiving unintentional cues from the questioners.

As for dolphins, researchers say they are intent on learning much more about their nature. For one, they want to know if dolphins imitate each other naturally to learn something new. Researchers also say they want to further test whether dolphins can imitate a novel behavior in the playful, thought-provoking animals.

At the end of one recent demonstration, Tanner and Kibby swim off side by side, zipping through the water to the far side of the long lagoon. There they playfully leap five times, their jumps coordinated in a synchronized tandem, before they return to their trainers to be rewarded with a fish treat.