Wagering on a royal wedding? Britons say you bet

Will they get divorced? Will Vivienne Westwood design the wedding dress? You can bet on anything in the U.K. 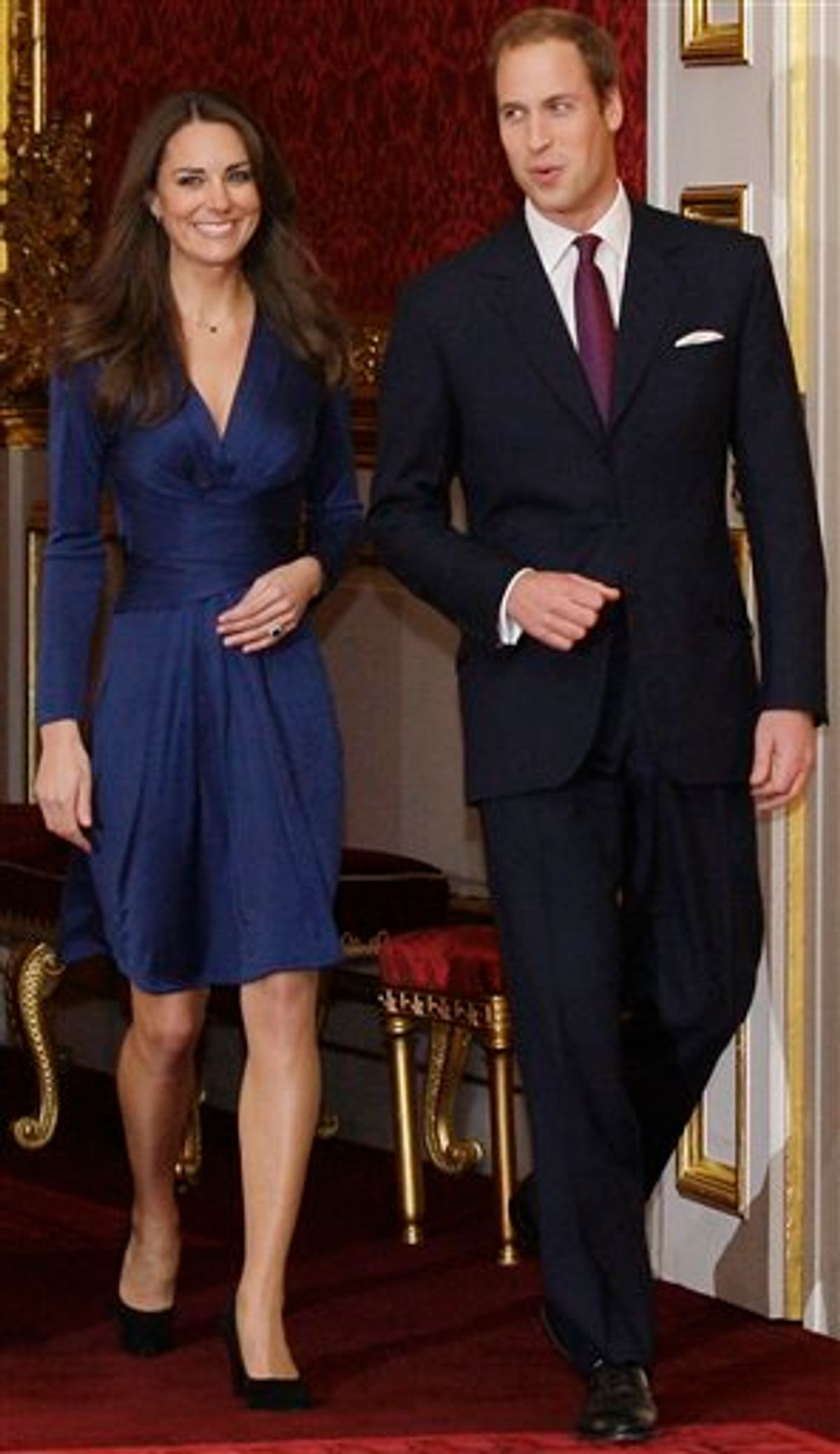 Two of the favorite pastimes in Britain -- royal-watching and betting -- are morphing into one raucous market centered on the royal wedding.

Prince William and Kate Middleton aren't even married yet -- that will take place April 29 -- but some Britons are already betting they will end up getting divorced.

The odds are unlikely, the topic is disrespectful but when two people disagree on a subject, it's time to lay some money down.

"There's a real tradition of betting on what the royals will do next," said Darren Haines, a spokesman for bookmaker Paddy Power. "The U.K. has a strange fascination with the royals."

One of the most popular wagers for the past several years has been on if, when and where Kate and Wills would marry. After news of their engagement broke in November, the when -- as in, what month -- brought in 30,000 pounds ($48,000) worth of bets for Ladbrokes, spokesman Alex Donohue said. The where -- now confirmed as Westminster Abbey -- drew about 15,000 pounds ($24,000) worth of wagers for the betting firm.

With those questions answered, bookmakers are looking to capitalize on the royal wedding mania by adding novelty bets before more details emerge. The market is small now, but expected to swell as the big day draws near.

Middleton will arrive at her wedding ceremony by car and leave by carriage, so she won't have to worry about the current odds of a Tube strike on her wedding day. Will she walk into Westminster Abbey right on time, be three minutes late, or make guests wait 11 minutes for a glimpse? How long will the train of her dress be? Gamblers are invited to place bets on all the above.

Most bookmakers are running a variation of the divorce question, with almost certain odds that the couple will make it to their 10th anniversary.

"You don't gamble on something like someone's marriage," the 55-year-old said while out shopping for groceries in London.

Bookmakers beg to differ and are eagerly considering suggestions for additions to the "wedding special" options as April 29 approaches. It might seem that nothing is off limits yet even bookmakers draw the line somewhere -- rejecting wagering on the likelihood of a terrorist act on the day of the ceremony.

"We don't look to bet on anything that's distasteful so we refused that request," Haines explained. "This is all about fun."

"Its largely people speculating, more for fun and a conversation piece than those who are genuinely expecting to make money," said Rupert Adams.

London accountant Rana Theva is not surprised by the betting fervor.

"People will place bets on just about anything," the 34-year-old said. The 'X Factor' (singing competition), horses, lotteries... So why not the wedding?"

William Hill is looking to add 3 or 4 new wedding specials a week. Bets are still open on the location of William's stag party and who his bachelor brother Prince Harry will take to the wedding as his date.

But since they never know when the palace -- or the tabloids -- will spill the beans, betting is time-sensitive. Wedding-special markets need constant review because, unlike a football or rugby match, decisions are already in the works.

Betting on the couple's honeymoon destination closed down at William Hill on Jan. 10 after an attempted wager of 5,000 pounds ($8,000) in favor of Kenya by a new account raised red flags.

"Nobody would risk 5,000 pounds unless they knew already that they were definitely going to go to Kenya," Adams said. "Whether it was someone from Kenya ... a (real) estate agent ... who knows? We were uncomfortable to bet on it."

By comparison, more than 300,000 pounds ($476,000) worth of bets were placed during the final episode of Britain's beloved "X Factor." Still, Adams said he expects volume to ramp up heavily right before the wedding.

"The vast majority of people placing a bet want to place a bet and get a result within a short period of time," he explained. "They'll probably wait until the last minute."

After all, the public won't know until at least April 29 if James Blunt's "You're Beautiful" -- the odds-on favorite for the couple's first dance -- was in fact chosen.

Bookmakers' core client base -- typically male, betting on sports such as horse and dog racing -- might not know the difference between Blunt's ballad and Bryan Adam's "Everything I Do," which is also on offer.

But the royal wedding market gives the country's betting houses a rare chance to draw in female customers.

"Reality TV and royal wedding (bets) appeal to women because it's what they read about, it's what they're interested in," Paddy Power's Haines said.

"Why would I want to bet on shoes and dresses?" the 47-year-old health worker said. "It's a little too girly for me, a little too soft. Not like horses."

Tamara Baluja contributed to this report.