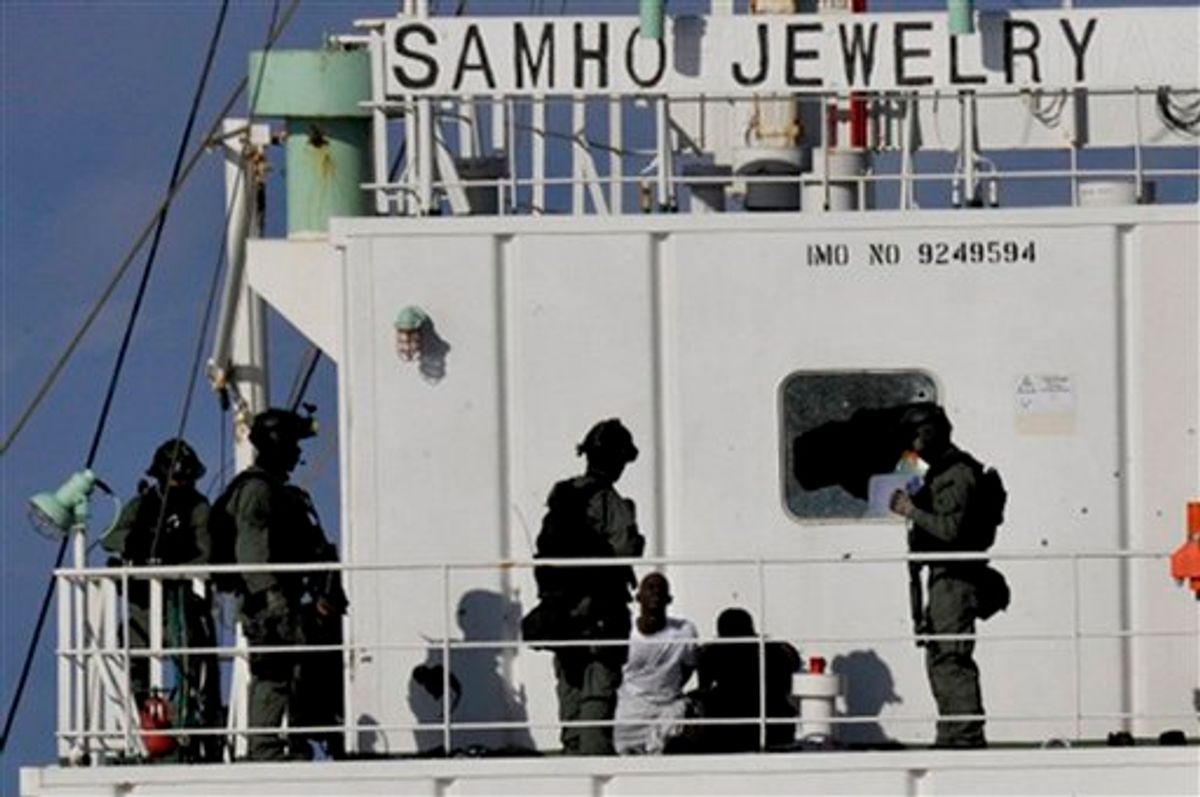 At dawn Friday, South Korean commandos steered their boat to a hijacked freighter in the Arabian Sea. Under covering fire from a destroyer and a Lynx helicopter, they scrambled up a ladder onto the ship, where Somali pirates were armed with assault rifles and anti-tank missiles.

Five hours after the risky rescue began, it was over.

All 21 hostages were freed from the gunfire-scarred freighter. Eight pirates were killed and five were captured in what President Lee Myung-bak called a "perfect operation."

It was a remarkable ending to the daring and rare raid, handing South Korea a stunning success in the battle against pirates who have long tormented shipping in the waters off the Horn of Africa.

The lone casualty among the crew was the captain, identified as Seok Bae-gyun, 58, who was shot in the stomach by a pirate, South Korea's JoongAng Ilbo newspaper reported. He was taken by a U.S. helicopter to a nearby country for treatment, but the wound was not life-threatening, Lt. Gen. Lee Sung-ho of the South Korean Joint Chiefs of Staff told reporters in Seoul.

The successful raid also was a triumph for South Korea's president and military. Both came under harsh criticism at home for being too slow and weak in the response to a North Korean attack in November on a South Korean island near disputed waters that killed two marines and two civilians.

Friday's operation came a week after the Somali attackers seized the Samho Jewelry, a 11,500-ton chemical carrier sailing from the United Arab Emirates to Sri Lanka.

The raid on the Samho Jewelry was rare because it came a week after the ship was seized. It was not clear if the crew was in a citadel during the rescue, but the wounded captain clearly was not.

Security forces are usually reluctant to launch such raids because of the risk to the hostages.

Friday's raid marked the first rescue operation since 2009 by a South Korean navy vessel deployed in the Gulf of Aden to help fight piracy.

"This operation demonstrated our government's strong will to never negotiate with pirates," Gen. Lee said.

The Samho Jewelry was the second vessel from South Korea-based Samho Shipping to be hijacked in recent months. The company did not respond to a request for comment.

On Thursday, pirates seized the MV Hoang Son Sun, a Vietnamese-owned bulk carrier with a crew of 24, the European Union Naval Force said. The Mongolian-flagged ship, which was boarded about 520 miles (836 kilometers) southeast of the port of Muscat, Oman, was not registered with maritime authorities responsible for helping prevent pirate attacks, the EU force said.

There are now 29 vessels and 703 hostages being held by pirates off the coast of Somalia. The country lies next to one of the world's most important shipping routes, which connects the Indian Ocean to the Suez Canal and the Mediterranean Sea beyond.

AP writers Katharine Houreld in Nairobi, Kenya, and Foster Klug in Seoul contributed to this report.