Is Olbermann the victim of his own success? 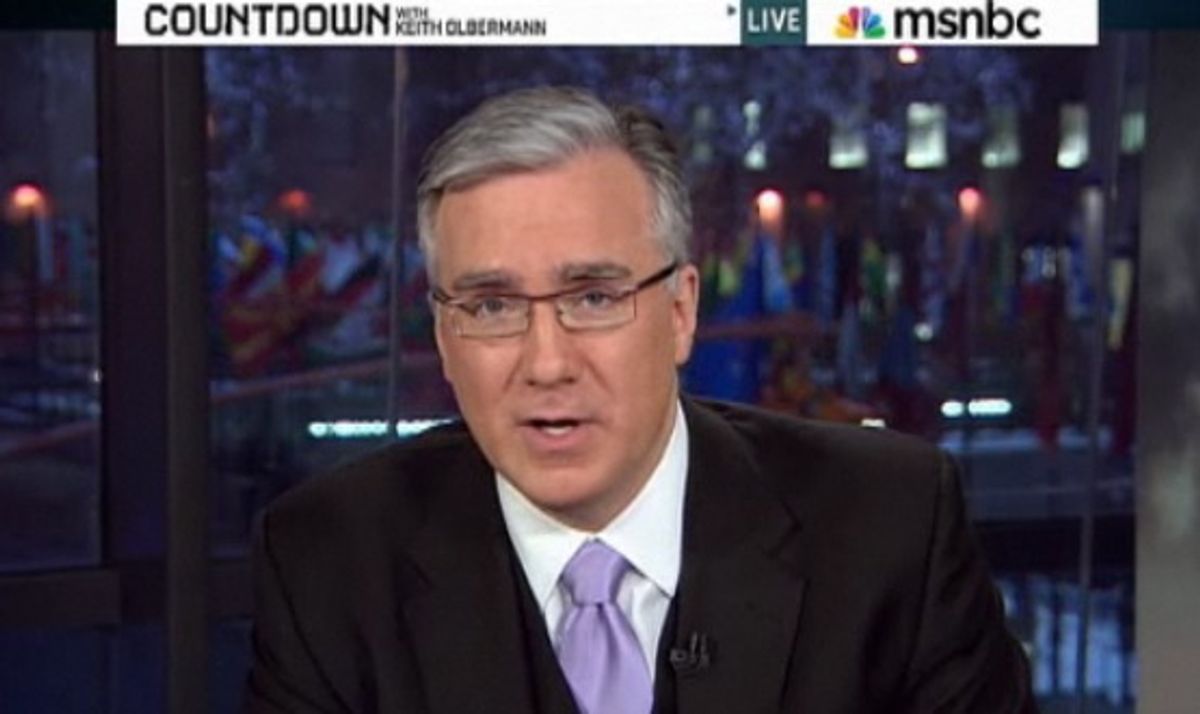 There was a time when MSNBC and Keith Olbermann both needed each other badly.

For the first decade or so of its existence, the cable news channel had only the vaguest of identities. Every few months, a new host or two would be tossed into the lineup, only to be shuffled around a few months later, and put out to pasture a few months after that. One day, Phil Donahue was the network’s prime-time face; the next it was Alan Keyes. Sometimes it seemed like the only programming MSNBC actually believed in was Don Imus’ tired minstrel show in the mornings and weird prison documentaries on the weekends.

Meanwhile, the other cable news channel launched in 1996 was tearing it up in the ratings. From the very beginning, the Fox News Channel knew what it wanted to be. Rush Limbaugh had shown that there were millions of conservative Americans who were addicted to political news and commentary -- and who despised the traditional broadcast outlets (and also CNN). They weren’t looking for thoroughly reported investigative pieces or in-depth coverage of foreign affairs; they just wanted to hear about the latest Clinton scandal or the latest outrageous statement from some Democratic congressman. The programming they wanted was cheap to produce, and if you gave it to them, they’d be fanatically loyal. "Fair and balanced" was thusly born, and by the turn of the century, Fox was overtaking CNN – and leaving MSNBC in the dust.

That’s where Olbermann came in. He had actually been part of MSNBC’s revolving door cast before, in 1997 and 1998. Back then, though, his prime-time broadcast, “The Big Show” (a nod to "SportsCenter," which he’d spent the previous five years co-anchoring with Dan Patrick), was as directionless as the network itself. Politics wasn’t always the focus and news was covered more from a general interest perspective. When the Monica Lewinsky scandal broke in early ’98, executives demanded that Olbermann build his show around it; they hoped it might legitimize MSNBC the way the Iran hostage crisis legitimized “Nightline” in 1979 and 1980. But Olbermann resisted and walked away, making his disgust well known. (This kind of exit is his trademark. After he left ESPN, an executive commented that, “He didn't burn bridges here. He napalmed them.")

He returned more than four years later, after a doomed stint hosting a sports show on Rupert Murdoch’s Fox Sports Net (and a brief period as a columnist, in 2002 and 2003, for Salon) and just as Donahue, MSNBC’s latest savior-turned-flameout, was being pushed out of his prime-time perch. "Countdown" was created, but its evolution to the broadcast we’re now so familiar with took time. The "Worst Person in the World" feature was an early hit, and even became a book. But by all accounts, the real turning point came in the summer of 2006. For three years, Olbermann had been chronicling the steady unraveling of America’s mission in Iraq -- and the staunch refusal of the Bush administration and its supporters to admit that much of anything was wrong.

At the end of his Aug. 30, 2006 show, Olbermann looked directly into the camera and spoke: "The man who sees absolutes where all other men see nuances and shades of meaning is either a prophet or a quack. Donald H. Rumsfeld is not a prophet." His blistering takedown of the defense secretary was a viral sensation. Millions of liberals were equally exasperated with the Bush administration; but few could express themselves as exquisitely and powerfully as Olbermann. They asked for more, and Olbermann gladly gave it to them; over the next few years, there would be dozens of “special comments,” each delivered in the same dramatic style.

Nor did Olbermann limit himself to criticism of the war and its planners. He became an all-purpose critic of the administration and its cheerleaders, and then of the Republican Party and the modern brand of conservatism it has embraced. For years, liberals had watched the growth of Fox News with dismay and alarm. With "Countdown," they finally had their own prime-time cable news show to flock to. Olbermann embraced the rivalry, skewering Fox and its personalities -- particularly Bill O’Reilly -- with biting humor and sarcasm, daring them to respond and acknowledge him. His ratings climbed -- not to Fox levels, to be sure, but to levels that had been unheard of at MSNBC.

MSNBC, for its part, embraced the identity Olbermann was offering them. By 2008, his frequent guest, Rachel Maddow, was given her own show at 9 p.m. And liberal radio host Ed Schultz was given his own shortly after that. Lawrence O’Donnell, another left-of-center voice, was added just a few months ago. Eventually, the network adopted a new motto -- "Lean forward" -- that’s about as subtle as Fox’s "fair and balanced" pledge. MSNBC’s prime-time lineup is now awash in progressive politics. The most conservative voice after 5 p.m. belongs to Chris Matthews, a former aide to Tip O’Neill who nearly ran for Senate in Pennsylvania as a Democrat last year. After casting about for years, MSNBC at last knows exactly who it is -- and isn’t -- trying to reach.

Of course, now that he’s surrounded by similar voices, Olbermann isn’t nearly as essential to MSNBC’s brand, which surely has something to do with his abrupt departure on Friday night. Exactly what led to his exit remains unclear, but it’s hardly a secret that he’s had several intense clashes with his bosses recently, one of which led to a brief suspension in November. Now that they’ve built a loyal prime-time audience of left-leaning viewers, NBC’s executives may simply feel that they can afford to be rid of Olbermann and all of the headaches he brings with him. It used to be that he was the only reason liberals turned on their channel at night. Now he’s one of many reasons -- a victim of his own success, in other words.