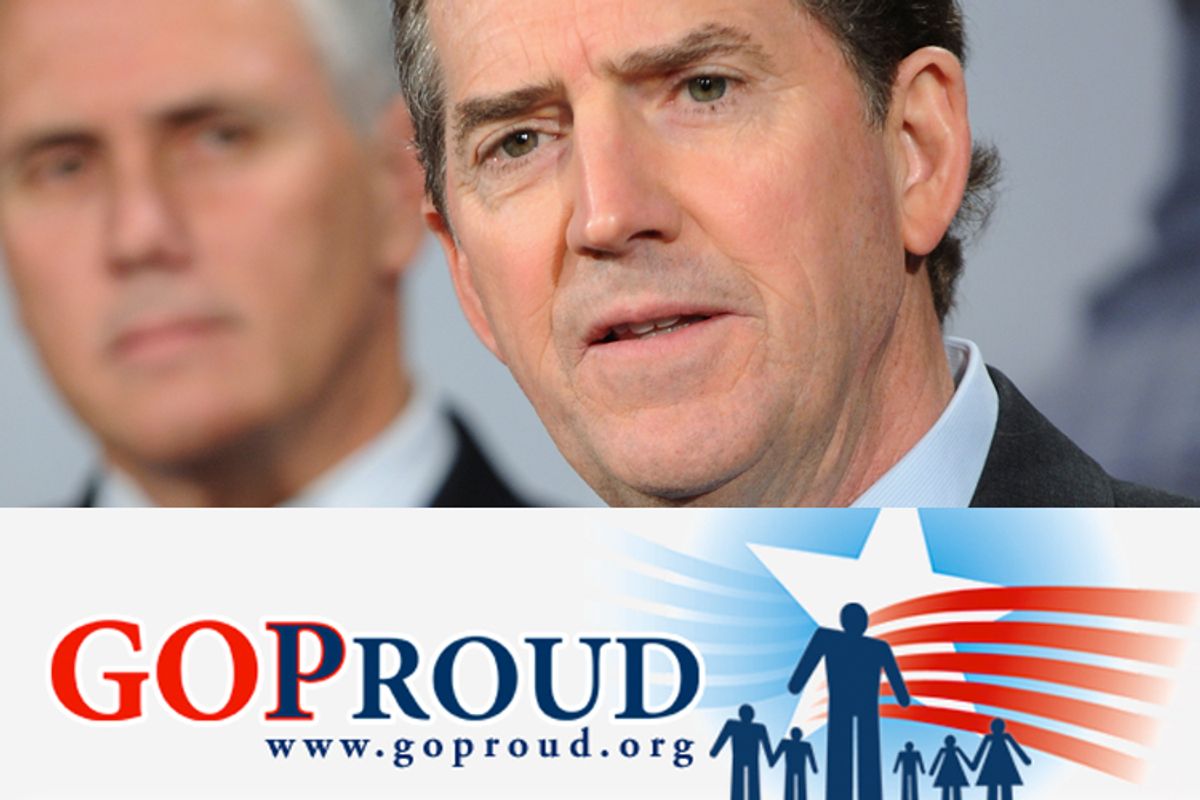 Jim DeMint will skip the Conservative Political Action Conference, the annual right-wing convention that is traditionally a mandatory stop for prominent Republican party leaders and would-be presidents. Brent Bozell's Media Research Council has pulled out. So have the Heritage Foundation, the American Family Association, Concerned Women for America and the Family Research Council. Mike Pence won't confirm his attendance.

What would lead these powerful conservative groups and stalwart Republican politicians to skip out on the biggest right-wing party of the year? Gay people. Specifically, people are up in arms about the participation in this year's CPAC of GOProud, a newish conservative group that, in its own words, "represents gay conservatives and their allies."

There are other reasons for social conservative groups to skip CPAC -- apparently the finances of the group that organizes the event are a mess -- and CPAC has generally involved a weekend of drunken revelry for participants anyway, so the social conservatives might not be missed all that much. But welcoming the participating of these so-called "conservative" homosexualists is obviously a thumb in the eye of traditional values.

Except there's nothing threatening to the social conservatives about the GOProud agenda. At all.

So why hate them? Why disassociate yourself from them? GOProud is like the imaginary Black Confederates in Virginia textbooks: They believe so strongly in the righteousness of your totally not-motivated-by-bigotry cause that they will fight alongside you and not ask you to grant them any pesky special "rights."

You don't need to worry about expanding the size of the tent, because GOProud is more than happy to squeeze into the existing tent. Is there a single item of the GOProud 2011 legislative agenda that Mike Pence would feel uncomfortable endorsing? It only mentions that gay people deserve "basic human rights" when it's talking about bombing the hell out of the Arabs. I mean, it's even with you on abortion.

So, social conservatives, I ask what you could possibly have against a group that seeks not to redefine marriage, but rather to abolish Obamacare.

I've been struggling to understand what the point is of a political group organized around sexual identity that purposefully does no lobbying based on its shared identity since GOProud started (why can't a gay conservative who doesn't care about gay marriage just donate to literally any other conservative group and not make such a big deal about squishy liberal "interest group" politics?), but what I really don't get is why any conservative wouldn't jump at the chance to associate with such right-thinking folks. Why would so many social conservatives turn down the opportunity to be seen as loving the sinner while still loudly hating the sin?