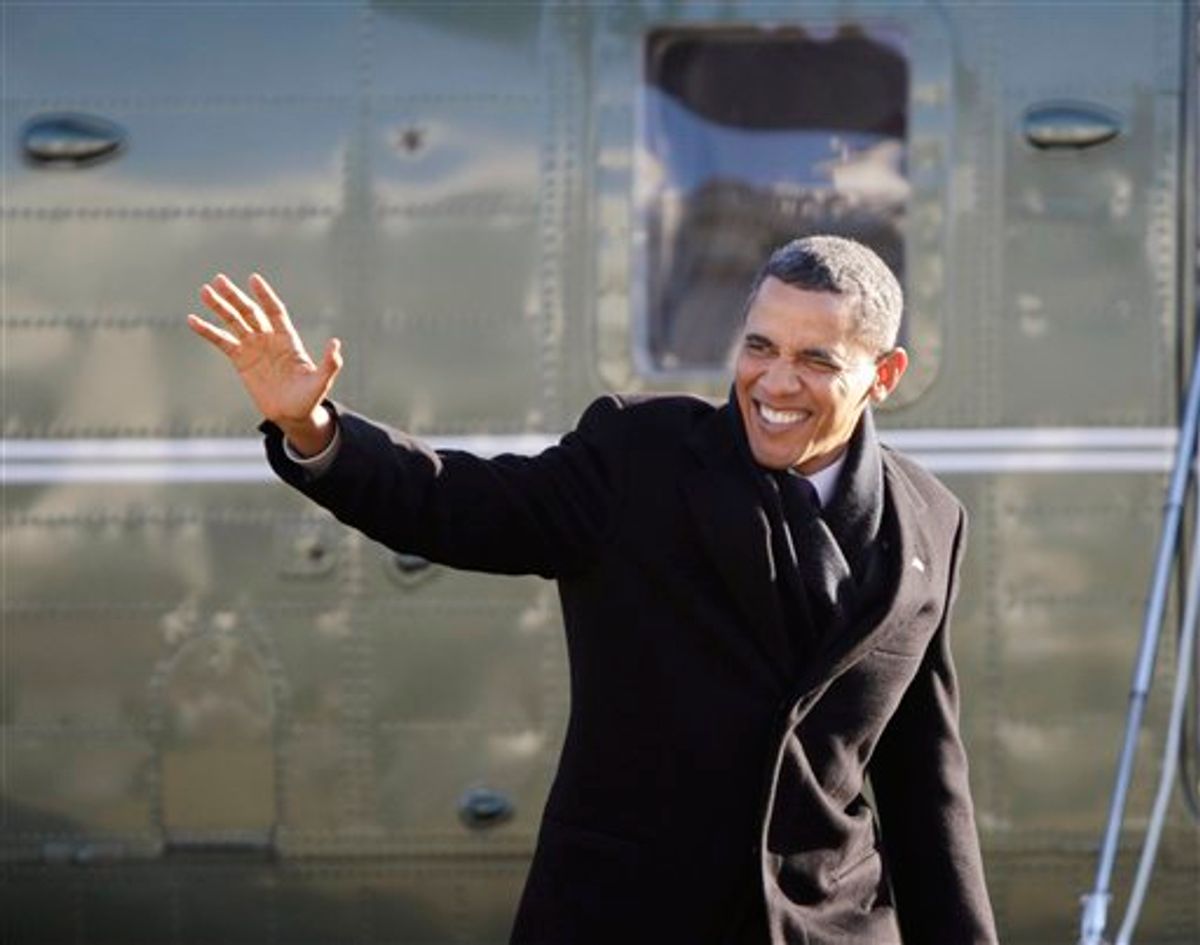 President Barack Obama waves as he arrives on the South Lawn of the White House in Washington, Friday, Jan. 21, 2011, from a trip to Schenectady, N.Y. (AP Photo/Pablo Martinez Monsivais) (AP)
--

President Barack Obama pitched freer trade as a prescription for U.S. job growth Saturday and said the nation must spare no effort to open markets abroad.

Warming up for a State of the Union address that is expected to focus on jobs and the economy, Obama said in his weekly radio and Internet address Saturday that getting access to foreign markets is the reason he met China's President Hu Jintao at the White House in the past week.

During the summit, China announced $45 billion in contracts and said it would increase its investments in the U.S. by several billion dollars -- deals that Obama said will support 235,000 American jobs.

Obama spoke the day after a quick visit to a General Electric plant in Schenectady, N.Y., that is producing steam turbines and generators for a project stemming from one of the Indian deals. He also lauded GE's plans to build a clean energy center, an advanced battery manufacturing plant and other state-of-the-art facilities in that economically battered city in upstate New York -- all projects he said would create jobs and help make the United States more competitive globally.

Efforts to create jobs and help America compete with the rest of the world are expected to be major themes of the annual State of the Union address Obama will deliver Tuesday night to a joint session of Congress.

In Schenectady, Obama also announced that he had named Jeff Immelt, the chief executive of GE, to lead a new advisory panel that will generate ideas to keep the economy growing.

"Here's the truth about today's economy," Obama said. "If we're serious about fighting for American jobs and American businesses, one of the most important things we can do is open up more markets to American goods around the world."

Republicans devoted their weekly message to the party's promise to repeal the landmark health care law Obama signed last year. That effort got under way when the House voted 253-175 to wipe it off the books in the past week.

That sent the bill to the Senate. Speaking for Republicans, Sen. John Barrasso of Wyoming called for a vote. Senate Majority Leader Harry Reid, D-Nev., has said he will not schedule one, meaning the legislation is bound to nowhere

"Thanks to the vote in the House of Representatives, we are now one step closer to victory in the fight for a health care policy that puts Americans first -- not Washington," said Barrasso, an orthopedic surgeon.

"Our job won't be done until we repeal and replace this bad law," he said.