When my kids unplugged

I felt social networking was driving my family apart -- so I banned it, and watched my family blossom 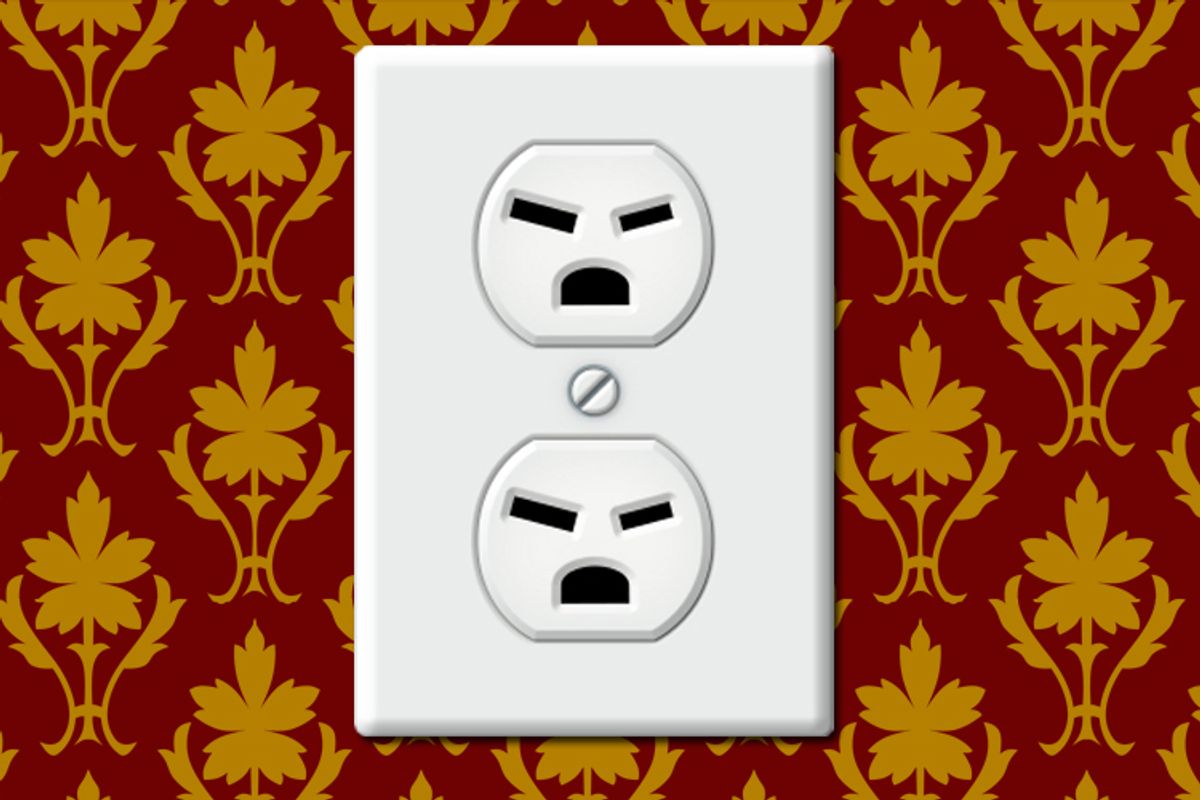 There were lots of reasons why we pulled the plug on my family's electronic media for six months ... or, I should say, why I did, because heaven knows my children would have sooner volunteered to go without food, water or hair products. At ages fourteen, fifteen and eighteen, my daughters and my son don't use media. They inhabit media. And they do so exactly as a fish inhabits a pond. Gracefully. Unblinkingly. And utterly without consciousness or curiosity as to how they got there. Over a period of years, I watched and worried as our media began to function as a force field separating my children from what my son, only half-ironically, called RL (Real Life). But to be honest, the teenagers weren't the only ones with dependency issues. Although a recent arrival to the global village, I'd been known to abuse information too.

And clearly, we weren't alone. Zeynep Tufekci, who teaches sociology to students at the University of Maryland, is convinced that social-networking media are making us more, not less, accountable for our actions. "We're going back to a more normal place, historically," she observes -- a place not unlike a small town, where everybody knows your business, whether you want them to or not. Identity theft is no longer the issue, Tufekci argues -- but preserving anonymity may well be. "You know that old cartoon? On the Internet, nobody knows you're a dog? On the Internet today, everybody knows you're a dog. If you don't want people to know you're a dog, you'd better stay away from a keyboard."

Other observers worry that our meaningful relationships are being nudged aside by one-sided "parasocial" connections, such as my fourteen-year-old daughter Sussy's relationship with Taylor Swift or Zooey Deschanel: "Peripheral people in our network whose intimate details we follow closely online, even while they ... are basically unaware we exist," in the words of Danah Boyd, a fellow at Harvard's Berman Center for Internet and Society. Social media have enabled an explosion of what anthropologists call "weak ties." But whither the strong ones? The deep ones?

And speaking of getting real, Flickr cofounder Caterina Fake -- and no, I am not making that up -- admitted recently that the ease of online sharing has made her slack about getting together with friends the old-fashioned way, in high-resolution reality. "These technologies allow you to be much more broadly friendly, but you just spread yourself much more thinly over many more people," she explained. And who wants to raise a stack of pancake people (to use playwright Richard Foreman's term for those who are becoming -- as it were -- flattened by Facebook)? My worst fear as a parent was that my kids might lose an alternative frame of reference -- that growing up as Digital Natives, they would swallow the pancake paradigm whole and forget there were more nourishing ways for friends and family to connect.

One particular evening my daughter Sussy and I hunkered down in front of the fire with the boxes of family photos ("Whoa. Look at all those hard copies!" she cried) for a veritable festival of face-to-Facebooking was a good case in point. We devoured thousands of images, laughing, hooting, or blinking in wonderment just as we would have done online. But sitting side by side, passing pictures from one set of hands to another, created a different energy. We didn't simply consume the images, or allow them to consume us. Rather, they became catapults, triggers for stories and recollections, for the exchange of family and cultural history far greater than the sum of the individual parts. "Yes, darling, Grammy was a hottie back in sixty-nine," I agreed, my eyes bright with unshed tears. "No, I'm pretty sure that was her real hair."

An impromptu glee club I encountered on one summer night around the piano evoked similar longings: more than a nostalgia for the real, it was a déjà vu about the real, I reflected, as the playlist skidded freakily from "The Jungle Book" to Death Cab for Cutie and back again. "I had no idea [your friend] could play the piano!" I exclaimed to my eighteen-year-old daughter Anni after the group dispersed that night. "To be honest, neither did I," she admitted.

"Was it okay? I mean, you all looked like you were having fun ..." I trailed off.

My fifteen-year-old son Bill's exile from MSN, Facebook, and his anime stash propelled him out of the door faster than a bullet from one of his beloved first-person shooter games. My dread was that he would simply make a beeline for his friend's house. And he did too -- at first. Within a week or two, his separation anxiety seemed to dissipate. He started spending more time at the beach and pool, catching up with friends he hadn't connected with since primary school. Matt, for instance, who was now a serious trumpet player, and Tom, the older brother of Bill's gaming buddy Pat, who had recently taken up jazz piano. They were both studying with the same teacher, a saxophonist named Paul Andrews, Bill reported. And so began the prelude to his renewed interest in the saxophone. Any chance that he could start lessons again? he asked me soon afterward.

I pretended to consider it -- no sense ruining everything by showing my approval -- and agreed to a "trial lesson." I came in at the end of it, just in time to see Andrews nod his head curtly.

"A musician," Bill replied without hesitation.

("WTF?" I was screaming internally.)

Up to that point, Bill had barely picked up his instrument in two years. From that point, he has hardly put it down.

In the ensuing weeks and months after that pivotal first lesson, I watched my son evolve like a human Pokémon from a surly, back-talking gamer to a surly back-talking musician in-the-making. (LOL.) To this day, Bill insists that it wasn't the technology ban that changed him. It was the friends, and the teacher they'd led him to. "Ah. I see," I reply.

"The technology ban was nothing but a trigger," he adds, a little less certainly.

Sussy ended up switching friendship groups too. Loss of Facebook (not to mention loss of MSN and MySpace) seemed to increase her focus generally; at the same time, it put her out of the loop with her old friends. "With Jen and Cat and that kind of group, you figure stuff out on the computer, like sleepovers and stuff," she explained to me. These invitations happened spontaneously, usually on the spur of the moment, in fact, with little or no notice. If you blinked -- or, more to the point, if you went offline -- you missed them. The girls in Sussy's new group at school didn't operate like that. "We planned a sleepover a week in advance!" she told me proudly, and slightly incredulously.

Sussy's coping mechanisms differed from Anni's and Bill's significantly. The older kids took the opportunity to go out more -- shopping, visiting, or clubbing in Anni's case, and hanging out at the pool or jamming in somebody's garage in Bill's. Sussy had fewer friends who lived in the neighborhood, so she faced major transportation issues. Her best girlfriend, my goddaughter Maddi, lived in Melbourne. Her closest boy chum, Andy, had just moved with his family to England.

She clung to the landline like a drowning teenager to a life raft. After school, she'd install herself in the family room, echoey and airplane-hangar-like now that it had been clear-felled of its media and their bulky accoutrements, and hold court before an unseen audience for two or three hours at a clip. She assured me that both Maddi and Andy had their parents' permission to ring her as often as they liked; it seems they had magic Internet landlines that made long- distance calls for free, "Or just about."

"What if you need to ring them?" I wanted to know.

"Easy. I just send them a signal -- I ring once or twice and then hang up. Really, Mum, we've got it all figured out."

Many people have asked me if there was ever a moment during the electronic media blackout when I was tempted to quit. Not counting April 25, the day I received a phone bill for $1,123.26, I can honestly say, no. Not at all.

Digital Immigrants use technology to achieve specific ends. Digital Natives breathe technology in order to ... well, breathe. To exist. Before, Sussy had pretty much lived online. Now she was pretty much living on the phone. Cleverly, she also used it to gain access to banned media. "Google 'Nick Jonas!'" she'd bark into the phone to Maddi, when the need to know the details of Miley Cyrus' relationship status grew unbearably urgent, or, "Check my Facebook!" (the girls regularly, and companionably, hacked each others' accounts anyhow), or, "Message Andy and tell him to ring me at eight my time." Maddi was now more than a best friend. She was Sussy's personal remote outsourcer, carrying out her digital bidding with terrifying dispatch.

Their relationship changed in less obvious ways, too, during those marathon conversations, and so did her connection with Andy. "On MSN, you're kind of almost waving at people. You get introduced, and it's like hi and LOL and ILY and stuff ... but you never really get to know them," she explained to me. "On the phone, it's totally different. It's like D&M [deep and meaningful] You get close. You get tight."

Susan Maushart is a writer living on Long Island, New York and the author of "The Mask of Motherhood" and "The Winter of Our Disconnect"