Despite a reputation for indiscriminate leaking, the website has released only 2,658 of its 251,287 documents 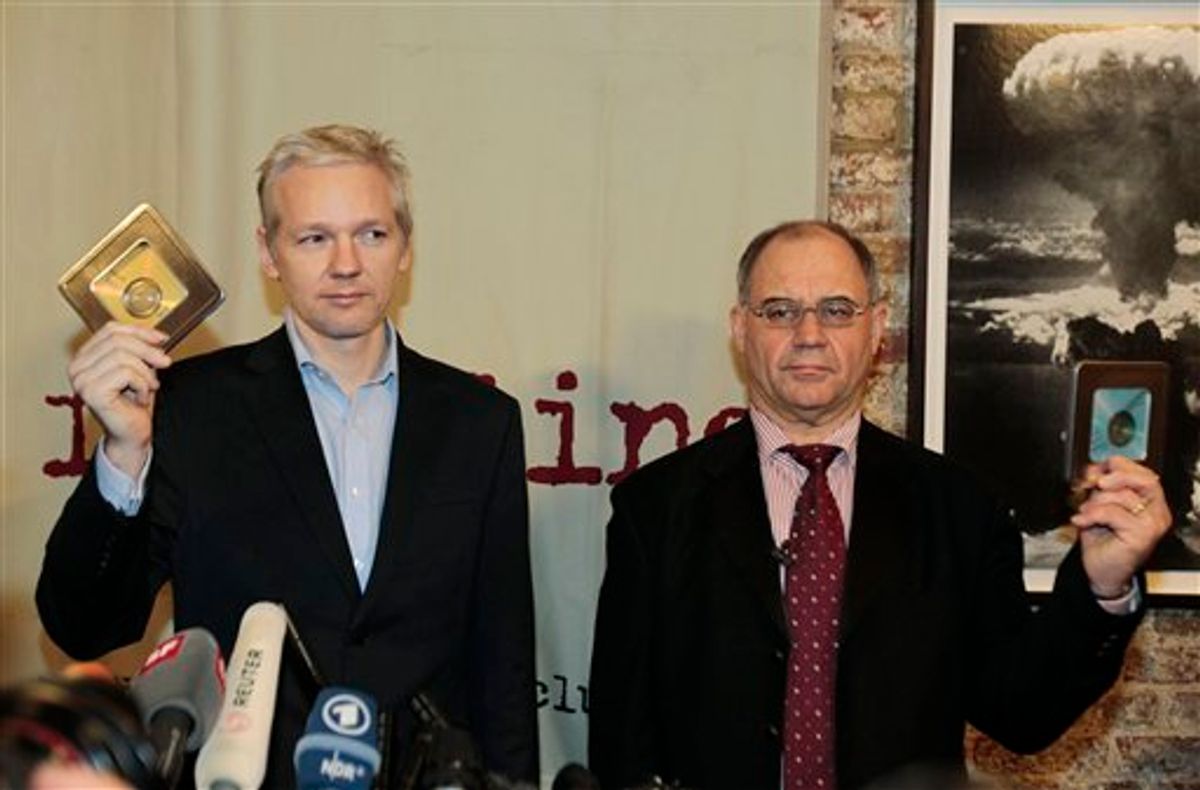 WikiLeaks founder Julian Assange, left, accompanied by former Swiss banker Rudolf Elmer, right, are seen after Elmer handed Assange two CD cases full of files, following a news conference at the Frontline Club in London, Monday Jan. 17, 2011. Elmer blew the whistle on the conduct of Julius Baer Bank in the Cayman Islands for which he is set to stand trial in Zurich, Switzerland, on Jan. 19 for breaching Swiss bank secrecy laws. Accompanied by his lawyer Jack Blum, he will reveal more details of alleged abuses in the world of offshore financial centres. As he did back in 2007 he will pass the said documents and information to Wikileaks. (AP Photo/Lefteris Pitarakis) (AP)
--

Nearly two months after WikiLeaks outraged the U.S. government by launching the release of a massive compendium of diplomatic documents, the secret-spilling website has published 2,658 U.S. State Department cables -- just over 1 percent of its trove of 251,287 documents.

Here's a look at what the consequences of the cables' release has been so far, and what the future could hold for WikiLeaks.

IT'S LIFTED THE VEIL ON INTERNATIONAL RELATIONS

WikiLeaks has given the world's public an unprecedented, behind-the-scenes look at U.S. diplomacy. Among the most eye-catching revelations were reports that Arab countries had lobbied for an attack on Iran, China had made plans for the collapse of its North Korean ally, and Secretary of State Hillary Rodham Clinton had ordered U.S. diplomats to gather the computer passwords, fingerprints and even DNA of their foreign counterparts.

Some of the most controversial cables dealt with a directive to harvest biometric information on a range of officials. U.S. diplomats have been forced repeatedly to deny spying on their counterparts -- although none have specifically addressed the instructions to gather personal details, sensitive computer data, and even genetic material or iris scans.

Anthony Cordesman, an analyst for the Center for Strategic and International Studies in Washington, cautioned that some cables were less explosive when taken in the context they were written. He noted that Arab belligerence toward Tehran has festered for years -- and suggested the rhetoric was being ratcheted up at a time of high tensions over Iran's nuclear program.

As for the cables on scooping up fingerprints, frequent flyer numbers, and other personal information, Cordesman said that "there isn't a diplomatic service in the world that doesn't serve its intelligence community."

IT'S SHOWN HOW LEADERS LIE

Over and over again, the cables captured world leaders lying -- to each other, to their allies, and to their own citizens.

Diplomacy "comes across as a scheming, duplicitous profession -- which it kind of is," said Carne Ross, a former British diplomat who resigned over the Iraq war.

Ross said the most outrageous example of double-dealing he had seen so far was the 2009 cable that caught Yemeni President Ali Abdullah Saleh sharing a joke about how another senior official had covered up a series of U.S. attacks by lying to parliament.

But there are other examples. One of the cables has Morgan Tsvangirai, Zimbabwe's longtime opposition leader-turned-prime minister, telling Western diplomats that his calls for easing sanctions against Zimbabwe are for public consumption only. Another cable cites Israeli officials, who have often insisted their controversial blockade of the Gaza Strip is targeted only at their arch-foe Hamas, as freely acknowledging that the restrictions were in fact an effort to keep the Gazan economy teetering on the brink of collapse.

The cables are laced with cynicism. One quotes a former French prime minister as dismissing a fellow socialist politician as too honest for his own good. Meanwhile Qatar's prime minister, Sheikh Hamad Bin Jassim Bin Jabr Al-Thani, describes his country's apparently cordial relationship with neighboring Iran as one big charade.

"They lie to us, and we lie to them," Al-Thani is quoted as saying.

Italy's Foreign Minister Franco Frattini drew considerable attention when he described the WikiLeaks release as the "September 11 of world diplomacy."

At the very least, the cables have angered some major world figures. Turkey's prime minister demanded that U.S. diplomats be punished for claiming that he had money stashed away in a collection of Swiss bank accounts; cables covering attempts to secure nuclear material in Pakistan drew outrage in a country where public hostility to the United States is already high; rivals such as Russia jumped on the cables to accuse the U.S. of arrogance and dishonesty.

Richard Dalton, the former British ambassador to Libya and now a fellow at London's Chatham House think tank, dismissed Frattini's prediction of a worldwide diplomatic meltdown, suggesting that things would eventually return to business as usual.

"It is -- so far -- a bump in the road," he said, although he noted longterm damage to U.S. diplomacy was still hard to gauge.

Even if the U.S. State Department rapidly recovers, individual officials still face serious damage to their careers. Officials have told The Associated Press that Ambassador Gene Cretz may lose his job as envoy to Tripoli over his descriptions of Libyan leader Moammar Gadhafi's eccentricities.

Allied officials have been rattled by the releases as well: The German foreign minister's chief of staff took a leave of absence following the revelation that he was feeding information to Washington; Afghanistan's finance minister offered to resign after he was quoted as describing President Hamid Karzai as weak and paranoid; Britain's central banker also faced criticism after a cable caught him sharing his doubts about Prime Minister David Cameron's economic competency with the U.S. ambassador to London.

Singapore's Foreign Minister George Yeo may have been speaking for many across the world last month when he instructed officials to be less open when speaking with their American counterparts.

"The WikiLeaks disclosures have been disastrous for U.S. diplomacy," Yeo said.

Although only a small sliver of the entire trove of State Department documents has made it online, the secret memos have been held by The New York Times, Britain's The Guardian, Germany's Der Spiegel, and Spain's El Pais for weeks, if not months.

Recent cables have made news -- one claimed that late Nigerian President Umaru Yar'Adua had a kidney transplant while he was still a state governor -- but most haven't carried the same punch as earlier releases.

It isn't clear whether WikiLeaks or what it calls its "media partners" have gone through the documents in their entirety. The secret-spilling website did not return an e-mail seeking comment on its future plans, although its founder Julian Assange has repeatedly promised to speed the cables' release.

Whether or not the State Department cables have already yielded their most arresting secrets, WikiLeaks is still sitting on a huge archive of leaked data from nearly every country in the world -- including, Assange has hinted, a massive trove of e-mails from Bank of America.

And even though his website is no longer accepting submissions, Assange said secrets were still making their way to him all the time. On Monday, a Swiss ex-banker -- now under arrest for his interactions with WikiLeaks -- handed Assange his latest set of secrets, data which he claimed carried details of tax evasion by some 2,000 prominent people.

Assange said the material could be online within weeks.