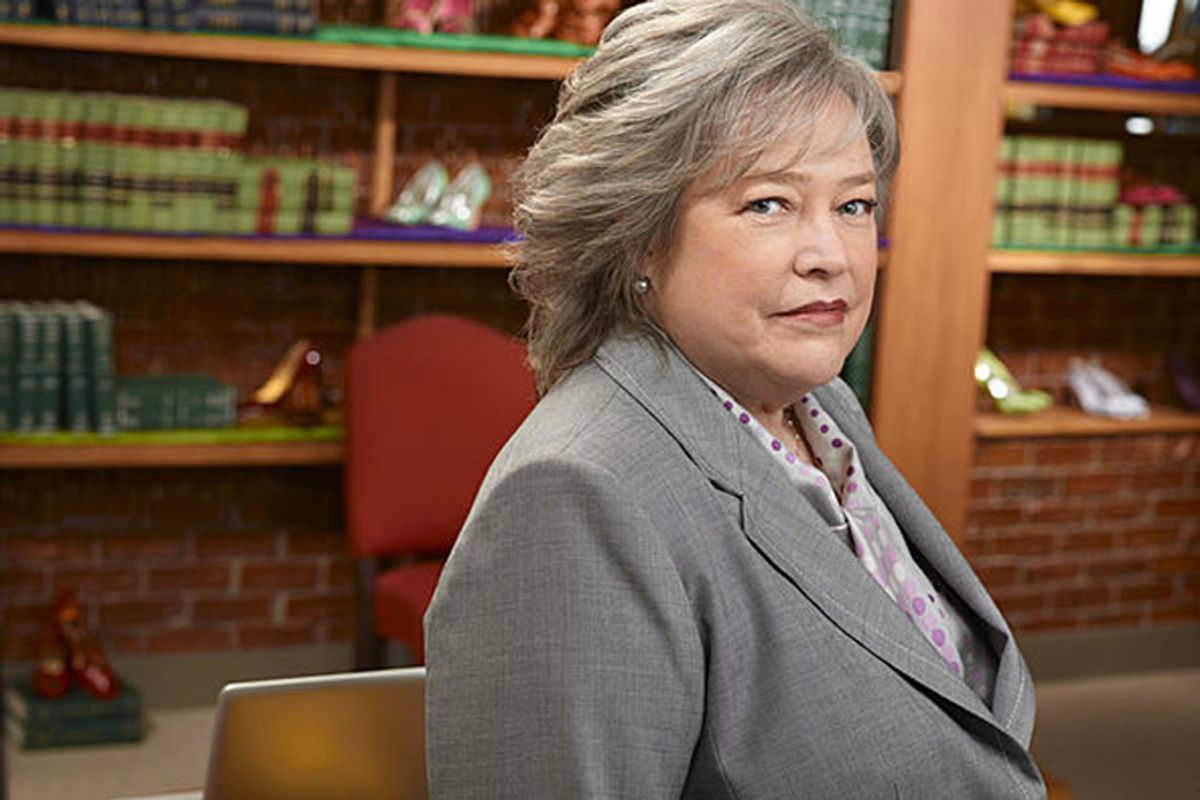 It's funny that writer-producer David E. Kelley keeps making shows about cynical careerists who rediscover their ideals, because on his shows you often see the same trajectory happening in reverse. Any given episode of any given Kelley series is a 12-car pileup on the Anything Goes freeway, mixing politically correct posturing, harangues disguised as legal summations, wacky ethnic characters, kinky sex and tabloid luridness. The creator of "The Practice," "Ally McBeal," "Boston Public" and "Boston Legal" is smart and prolific and capable of surprise, and he's unafraid to court controversy, but does he stand for anything except industry success? I'm sure he'd insist otherwise, and would point to all the legal concepts his law series have introduced to American television, and all the hot-button issues they've dealt with. But to me, Kelley's shows embody the sneering stereotype of network TV in the '60s and 70s, when most of it was stupefyingly bad and boring and safe: There's a flurry of activity each week, but nothing really happens, and the characters are inconsistent, often nonsensical, doing and saying whatever they have to do or say in order to hold our attention and fill up the space between commercials.

That pretty much describes Kelley's latest, "Harry's Law" (Mondays, 10 p.m./9  Central). It's about Harriet "Harry" Korn (Kathy Bates), a burned-out Cincinnati patent attorney who gets fired for smoking pot in her office, then gets hit by a young man named Malcolm (Aml Ameen) after he jumps off a roof, and then is released from the hospital only to be hit by a car driven by a hot shot young attorney named Adam Branch (Nathan Cordry), then joins forces with both of them and some other characters and takes over a shoe store in a rundown neighborhood and turns it into a law firm that seems to handle every kind of civil and criminal case. But because this is a Kelley series, Harry and her staff continue to sell shoes. There's a high-heeled shoe in the series' logo. I know -- cute, right?

The moment in tonight's episode where one of Harry's staff shows up with a sandwich board that promises a legal defense and women's shoes is cute, too, as is the line about how the shoes are on consignment. Kelley's shows are always very, very cute, often greeting-card cute, until they suddenly turn grotesque or sleazy or gratuitously stupid (remember what happened to George Vogelman on "The Practice"?) or toss in some antiquated ethnic stereotype (like the no-tickee, no-shirtee Chinese laundromat guy who accosts the heroine at the start of tonight's episode of "Harry's Law" and sets a subplot about China's one-child reproductive policy in motion) or  suddenly start lecturing you about gun control or workplace harassment or immigration or abortion or something, as if a mediocre episode of "Seinfeld" had suddenly decided to rally by turning into "Twelve Angry Men."

I think it would be best for everyone involved -- especially the audience -- if "Harry's Law" were quickly canceled. It's not as bad as some recent Kelley series ("The Brotherhood of Poland, New Hampshire," to name one). But  judging from the pilot and tonight's first regular episode, it's got all the David E. Kelley tics and tricks that make me want to drink lye, but none of the energy and confidence that often make Kelley's series watchable anyway. My favorite Kelley show was his "Practice" spinoff, "Boston Legal," because for long stretches it seemed to slough off the bonds of reality altogether and become a strange comic soft-shoe between William Shatner and James Spader, two of the most authentically bizarre actors ever paired as co-leads in a long-running TV program; but even if "Harry's Law" decided to go in a "Boston Legal" direction, I doubt the show could pull it off, because it's so half-assed. It looks awful, too, with its utterly undistinguished cinematography and blocking and "Hey, look, we're on the same generic urban backlot every NBC show uses!" settings, and the blown-out windows looming behind people's shoulders as if they're on a reality TV series. I don't think the show is smart enough to be doing any of this stuff for a reason; more likely either Kelley or NBC is a cheap bastard. At times it feels as though Harry is a coded stand-in for Kelley himself, a legendary figure who's bored with his job and has run out of ideas and inspiration, but who needs to stay in the game because he doesn't know what else to do.

But the more pressing problem with the show is that Bates, so often a hilarious and surprising actress, can't seem to find to find a way into this character. Supposedly the title role was intended for a man until Bates read the pilot script and took a liking to it. If you picture Harry's predicaments and dialogue on the page, then imagine Shatner or Spader in "Boston Legal" mode doing and saying the same things as Bates, you can almost envision a watchable series. The problem isn't the gender swap, it's that Bates' energy is wrong. She seems to be playing Harry as a real person rather than a David E. Kelley kook. Watch how she interacts with one of her clients, the 87-year old African-American grandmother (Irma P. Hall) who's being tried for sticking up a convenience store because she would have starved otherwise. Harry's embittered bluster dissolves almost immediately, and she begins responding to the woman's plight on a human level, and the score signals Harry's thaw by tinkling in our ear. Bates, who does over-the-top very well ("Misery," "Primary Colors"), can't help reaching out to the client, and responding naturally, as most functioning people would. That's fine, but it doesn't match up with the woman we saw earlier in the episode who responded to the staff's sighting of a rat in the shoe store/law office by pulling a pistol and blowing the rodent away.

The rat scene and the scenes between Harry and the stickup granny encapsulate the show's problems. Apparently this isn't just the kind of series where the lead character packs heat and uses the gun to casually blow away vermin in her workspace; it's the kind of series where the rest of the staff reacts to random, stupid, incredibly dangerous gunfire in their office by sort of shrugging and then carrying on with their business. That's all fine -- it would even be funny if the timing were sharper and the tone more vigorous -- but when "Harry's Law" suddenly becomes a finger-wagger about the neglect of elderly people of color and the cruelties of the post-capitalist economy, and Kelley hasn't bothered to smooth the shift between those wildly different modes, and if the star is overdoing the earnestness and fellow-feeling and neglecting to make the main character hard and unpredictable and nutty, there's really no way that the series can ever work.

Interestingly, Irma P. Hall, who played the matriarch in "Soul Food" and the righteous widow in the Coen brothers' remake of "The Ladykillers," comes closer to selling this unwieldy work-in-progress than any of the regular cast members. She's an old movie-style actress, always sharp as a tack, always playing the character and seemingly not giving a damn what you think of her. I am tempted to argue that if you put an actress like Hall in a series like this one, you might have something. But I don't want to give Kelley any encouragement.