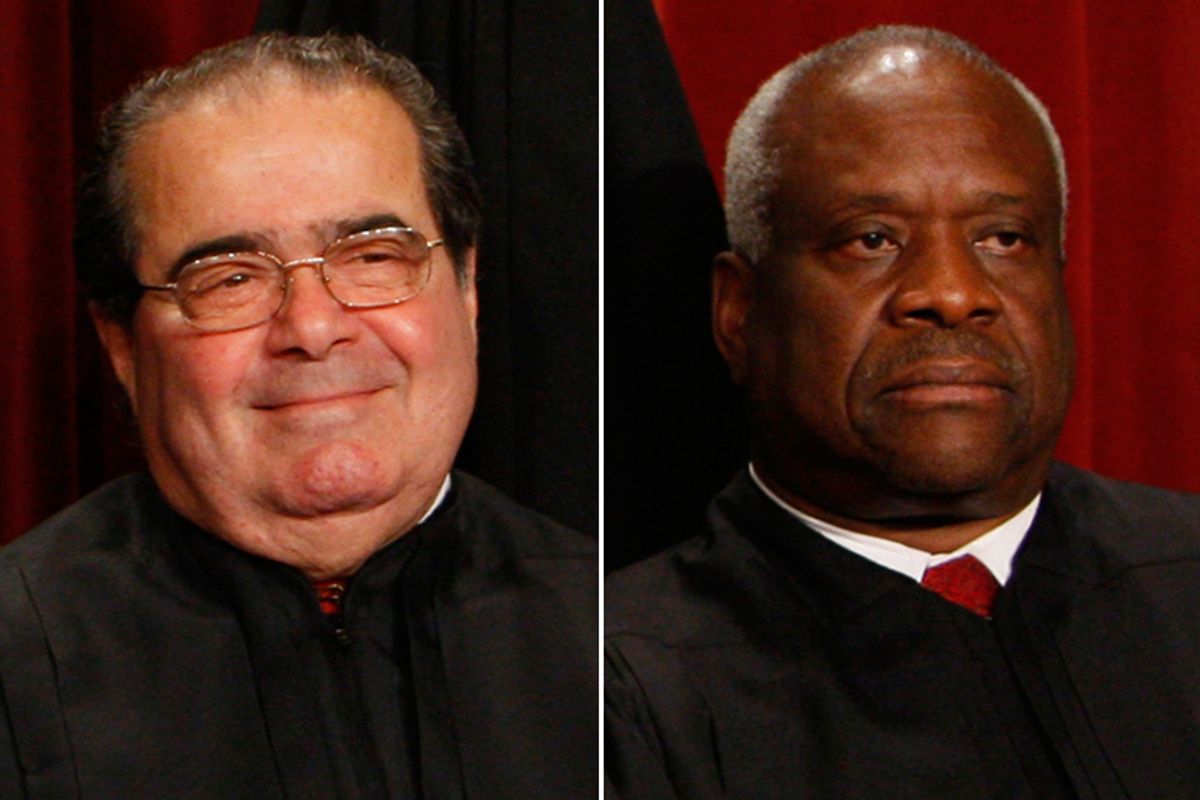 So, Supreme Court Clarence Thomas neglected to report his wife Ginni's income from a right-wing think tank. Or maybe "neglected" is the wrong word, because that sounds sort of benign or accidental. It's more like he refused to do so, for years. Thomas' wife is a longtime conservative activist, and she worked for the influential Heritage Foundation from 2003-2007. In his financial disclosure forms, under "spousal noninvestment income," Clarence Thomas just checked the "no" box, every year.

Of course, everyone knows that Ginni Thomas is a partisan political activist who makes her living working for right-wing groups. So checking "no" in that little box every year is not just deceptive, it's also pretty pointless. Unless you are simply against the idea of "disclosure" itself, on principle, as Thomas seems to be.

He will probably not be punished for this, by the way, because it's extraordinarily difficult to "punish" Supreme Court members for anything.

This odd practice of routinely lying on forms was brought to light by the watchdog group Common Cause, who also recently wrote a letter to Eric Holder criticizing Thomas and Antonin Scalia for attending fancy Koch-sponsored functions before ruling, in Citizens United, that restrictions on corporate electioneering be lifted. Of course, neither Scalia nor Thomas believe that their personal and professional ties to the conservative movement should cause them to recuse themselves from politically sensitive cases. In fact, their attitude tends to be that everyone should just shut up and stop complaining about it. As Garrett Epps writes in The Atlantic, they -- along with Republican fundraiser-attendee Samuel Alito -- are openly flouting years of judicial etiquette. And they don't really care. Scalia generally acts like he'd be much more at home on talk radio than in the Supreme Court. (Scalia's Constitution lesson for Michele Bachmann and the incoming Tea Partiers was scheduled for today, by the way.)

Maybe the way to think about this without getting all upset is to just admire the refreshing honestly of a deeply, openly partisan Supreme Court. (Except that it's basically partisan in one direction, because Ruth Bader Ginsburg isn't fishing with Joe Biden.)