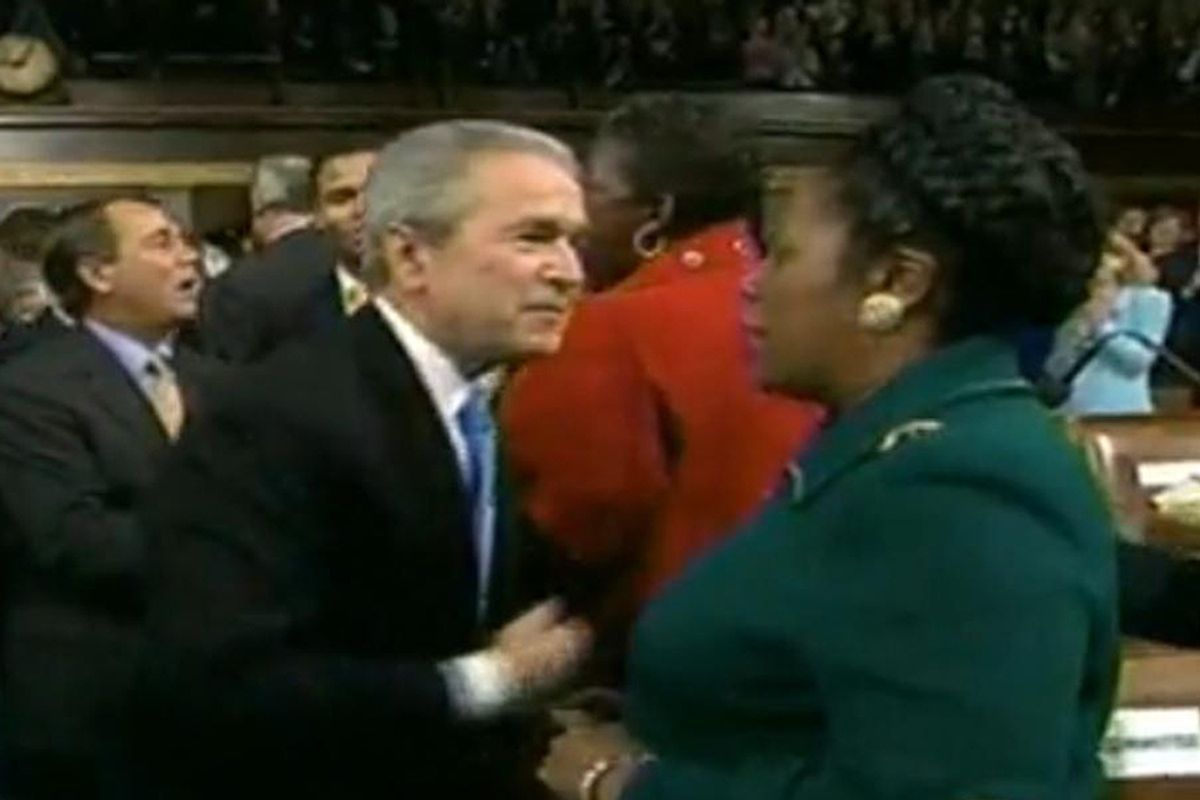 [Updated below]As congressional theater goes, it doesn't get much better than the entrance of the president for a State of the Union address. You know how it goes: The packed House chamber, filled with members of both the House and Senate, is gaveled to order and the president's arrival is announced, at which point a great cheer goes up from members of both parties. The president then works his way slowly down the center aisle,  pausing occasionally to exchange pleasantries with some of the many members who have stretched their hands out to greet him.

But if you're a longtime State of the Union-watcher, maybe you've noticed what we have: There's a handful of congressmen and -women who always seem to end up perfectly positioned to cross paths with the president -- and to get their own faces on national television -- as he makes his way in. This is no coincidence. Seating for the State of the Union is not assigned; senators and House members claim their spots on a first come, first served basis. So when you seen a member of Congress standing along the center aisle as the president enters, chances are good that he or she staked out his or her turf early -- as in hours early. And when you see the same member of Congress standing on the aisle year after year, it's pretty clear that being seen on television with or near the president -- even if it's for a split second -- matters greatly to that member.

With the help of C-Span's video archive, we went back and looked at the last 10 State of the Union speeches, dating back to the end of the Clinton presidency, in an effort to identify the members who have been most persistent when it comes to claiming the best seats in the House. The process, we will admit, was inexact. For most years, we were at the mercy of the camera shots that were shown on C-Span, which do not always capture everyone gathered on the aisle. But we think we've seen enough to crown the five biggest aisle hogs in Congress:

* Dale Kildee (D-Mich.): The 81-year-old Democrat from the Flint has been in the House since 1976. He's pretty easy to spot (he looks vaguely like Dick Clark) and has managed to finagle an aisle spot for every single State of the Union address since at least 2000. Despite his long House tenure, he doesn't have much of a national profile; the few seconds of airtime he snags on State of the Union night may be his biggest claim to fame.

* Sheila Jackson Lee (D-Texas): Elected in 1994, the 61-year-old Jackson Lee has gotten herself in trouble several times thanks to what the Almanac of American Politics delicately called her "regal pretensions." In an infamous 1998 incident, she reportedly threw a tantrum on a Continental Airlines flight when she wasn't served the meal she had requested. "I'm Congresswoman Sheila Jackson Lee!" she thundered. "Where is my seafood meal? I know it was ordered!"

* Dennis Kucinich (D-Ohio): We couldn't find him in every archived State of the Union video, but more often than not, he's found his way into space on the aisle, usually near the back of the chamber, where the president enters.

* Eliot Engel (D-N.Y.): Often overshadowed by his New York colleagues, the 63-year-old Engel has them beat by miles when it comes to getting on television on State of the Union night. The only comparable national exposure he's gotten in his 18 years in the House? His 2006 interview with Stephen Colbert, during which he refused the comedian's request to stroke his mustache -- but allowed Colbert to brush it with a small comb.

* Jesse Jackson Jr.: We found him on the aisle for at least four recent State of the Unions. Maybe he saw it as a chance to increase his visibility in advance of a campaign for U.S. Senate -- something we learned he was very interested in during the Rod Blagojevich saga.

As noted, there are other members of Congress who might qualify for this list (we're looking at you, Rosa DeLauro and Al Green). And as Michele Bachmann demonstrated back in 2007, you don't need to be on the aisle every year to stand out during a State of the Union entrance. Anyway, we've put together a brief video showing our five favorite aisle hogs in action, which is embedded near the top of this post.

Update: If you thought this story might scare the aisle hogs off tonight, you were wrong. Shortly after 9 P.M., President Obama's arrival at the House chamber was announced, and seconds later he was face to face with ... Dennis Kucinich. Along his way down the aisle, the president was also greeted by Dale Kildee, Sheila Jackson Lee and Eliot Engel, aisle hogs all. (Engel apparently had spot on the aisle -- on the Republican side, in a nod to the night's unofficial bipartisan civility theme -- by 10:00 this morning.) We should note, though, that Jesse Jackson Jr. appeared to be absent from the aisle, while Al Green and Jean Schmidt -- both of whom narrowly missed the cut when we assembled this list -- were there.