In defense of Jane Eyre 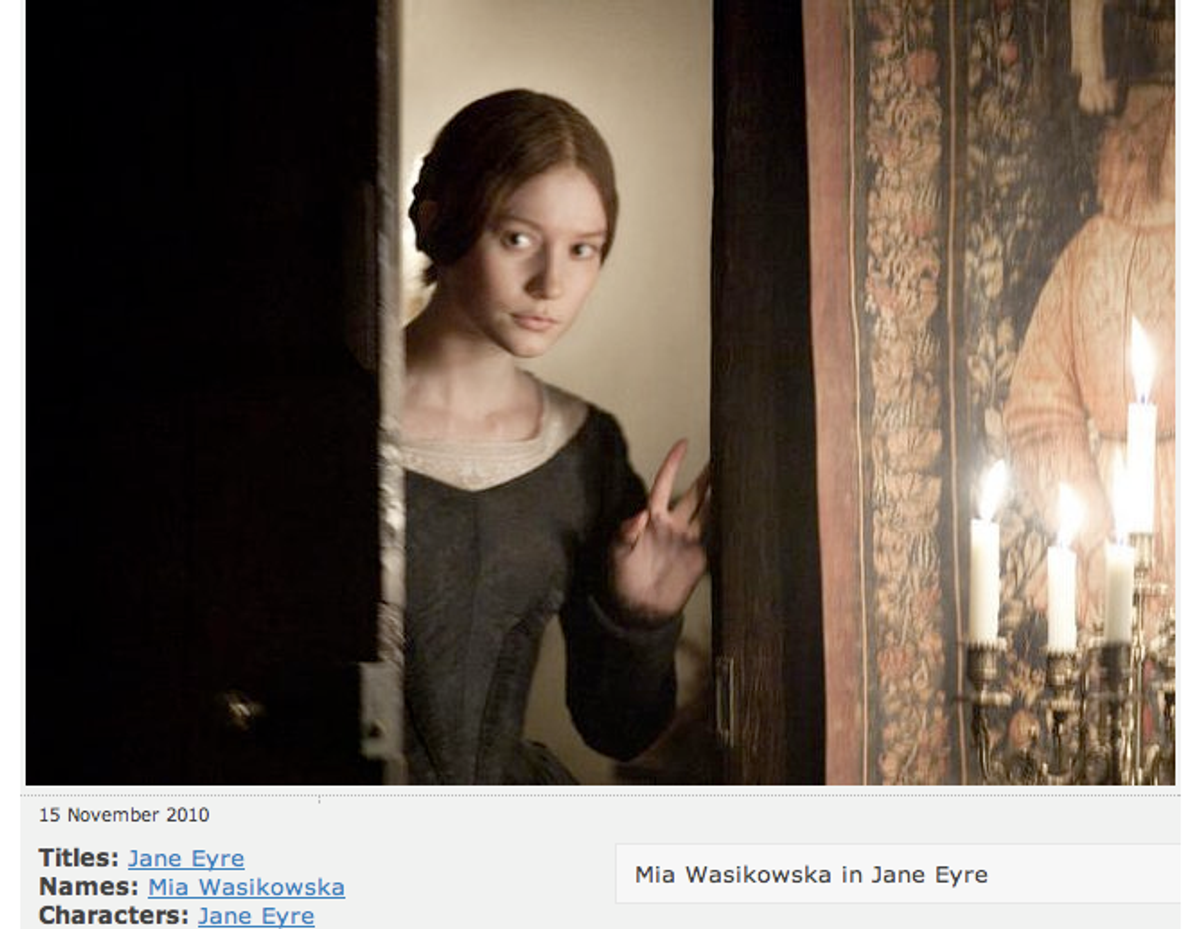 For a great novel, "Jane Eyre" has endured more than its fair share of misguided, condescending misinterpretations, but none quite so extravagant as an essay published in the British newspaper the Telegraph last week by novelist Sebastian Faulks. "Jane Eyre is a heroine," he announces in the opening sentence, while "Becky Sharp, the main character of Thackeray's 'Vanity Fair' (1847-48), is a hero." Furthermore, "No one seems to question the distinction: it's obvious."

In explaining this curious formulation, Faulks acknowledges Jane's "resilience" and "moral calibre" but qualifies this praise by claiming that "her happiness, and her psychological 'completion,' seem to depend on her securing the love and companionship of another, Mr Rochester." This need, he maintains, is incompatible with heroism.

By contrast, Becky Sharp -- a conscience-free climber and high-society con artist -- may be widely viewed as the anti-heroine of "Vanity Fair," but Faulks believes that her "resourcefulness and skill," combined with her refusal to regard her "feelings for a man as a fixed point or priority," add up to a form of heroism. That's because, in Faulks' view, "pairing off is not the goal or completion of the heroic trajectory. The hero imprints his or her qualities on society and by doing so overcomes false or smothering social restrictions."

This definition of heroism is very far from "obvious," let alone universally held, but let's set that aside for the moment and consider Faulks' (mis)characterization of Jane. It's especially worth doing in light of the new film version of "Jane Eyre" set to be released in early March, and the likelihood that it will, like other adaptations, treat the book as a simple love story.

The belief that Charlotte Brontë's novel is in essence a romance, with Jane's marriage to Rochester serving as her character's "completion," is certainly a common one. One reason for this error is that "Jane Eyre" is one of the key inspirational texts for an entire genre of fiction, the romance novel, in which the marriage of heroine to hero is the primary purpose of the narrative. But "Jane Eyre," despite its fictional legacy, is not a romance novel.

The pivotal moment in "Jane Eyre" is not the one in which the Byronic Mr. Rochester professes his love for the "poor, obscure, plain and little" governess and asks her to marry him. Rather, that moment comes after Jane learns that she can't wed the man she loves because he is already married (to a madwoman, whose existence he has concealed from her). Rochester attempts to keep Jane by suggesting they run away to France together, but she refuses. She flees his house and, without family or other protectors, the penniless young woman is soon reduced to beggary, grateful to eat scraps originally intended for pigs.

This episode is only one of a series -- including the chapters devoted to Jane's childhood amid unloving relatives, her years in a harsh boarding school, and the weeks when, having been rescued by a family of a devout Calvinists, she contemplates life without Rochester -- that describe not Jane's quest for love but her assertion of her autonomy in a world that regards her as entitled to none. In the past, Jane rebelled against authority figures to defend the legitimacy of her feelings, but when she leaves Rochester, it is her own desires that she defies, this time on behalf of her principles.

It's often difficult for modern readers to grasp the importance of Jane's resolve because our moral code has shifted. We might, for example, regard it as a greater evil to abandon true love than to violate a marriage as empty as Rochester's. But Jane believes to her core that what Rochester proposes to her is wrong (also, that it will ultimately damage his respect for her), and even if we can't necessarily agree with that, this is what matters in the context of Brontë's novel.

What modern readers are also prone to miss is that Jane sacrifices not only her heart's desire, but also, for all she knows, her life. A woman of her class, without family, money or wealthy friends, had few ways of making a living besides governessing (an option lost to her without references) or prostitution (which, even if Jane would have considered it, was itself merely a drawn-out death sentence), especially in the pre-industrial English countryside. Within days Jane has begun to starve. Though the Rivers family saves her, she has no reason to expect or even hope for that salvation.

For Jane, the "fixed point and priority" of her life is not "her feelings for a man," but the self-determination expressed in her ability to choose her own truth over those feelings and even, if necessary, over life itself. Her abandonment of Rochester is her coming of age. It's hard to see how such a personality, and the drama of that personality reaching this apex of despair, clarity and fortitude, could be seen as un-heroic, especially compared to the adventures of a sociopath like Becky Sharp.

Faulks admires Becky because she is "magnificently indifferent" to romantic love and because there's no sign that her "emotional life is such that it would influence her worldly actions." She uses and manipulates people in the "lifelong survival game" of mid-Victorian social life. She's certainly a terrific character, but how this constitutes imprinting her "qualities" on society or overcoming "false or smothering social restrictions" isn't clear. Becky simply plays that game by the real (rather than the stated) rules, and does better or worse depending on her skill and luck at any given turn.

"Vanity Fair" is a satire set on a large stage, and "Jane Eyre" is a brooding Gothic bildungsroman with a much tighter focus (as well as a first-person narrator), but the world Brontë depicted is arguably as brutal as Thackeray's. Nevertheless, it is Jane who succeeds at transcending social restrictions by steadfastly insisting on the inviolable dignity of even someone so "insignificant" as herself. The fact that she does it in a smaller context (the only context available to her) doesn't make this any less of a victory.

Of course, Jane does get her man in the end, as every reader of Brontë's novel hopes she will. Marrying Mr. Rochester makes her happy. Why shouldn't it? Faulks claims that "a hero can be disappointed or defeated in love and it will not matter, because pairing off is not the goal or completion of the heroic trajectory." But this amounts to saying that love (as Jane obtains it, on her own terms) shouldn't matter that much, that it is a less worthy goal than wealth and influence, which is what Becky is after.

For Faulks, placing emotional connections at the center of one's life is a form of "surrender" that female protagonists -- with the exception of the wicked yet thrilling Becky -- too often make. Only by triumphing over others, by treating them as instruments of her will, does Becky transcend this fatal (presumably feminine) weakness and show the "independence" of a true hero. Perhaps it's no surprise, then, that Faulks was chosen to write the continuing adventures of a less amoral but equally self-contained protagonist, James Bond -- a man, it must be noted, who does not have a single friend. He can call that heroism if he likes, but I can think of better words.

Sebastian Faulks on Becky Sharp and Jane Eyre in the Telegraph