Preempting the hysteria over Moscow bombing

We can never make our airports, or any other crowded places, absolutely safe. Can we come to terms with that? 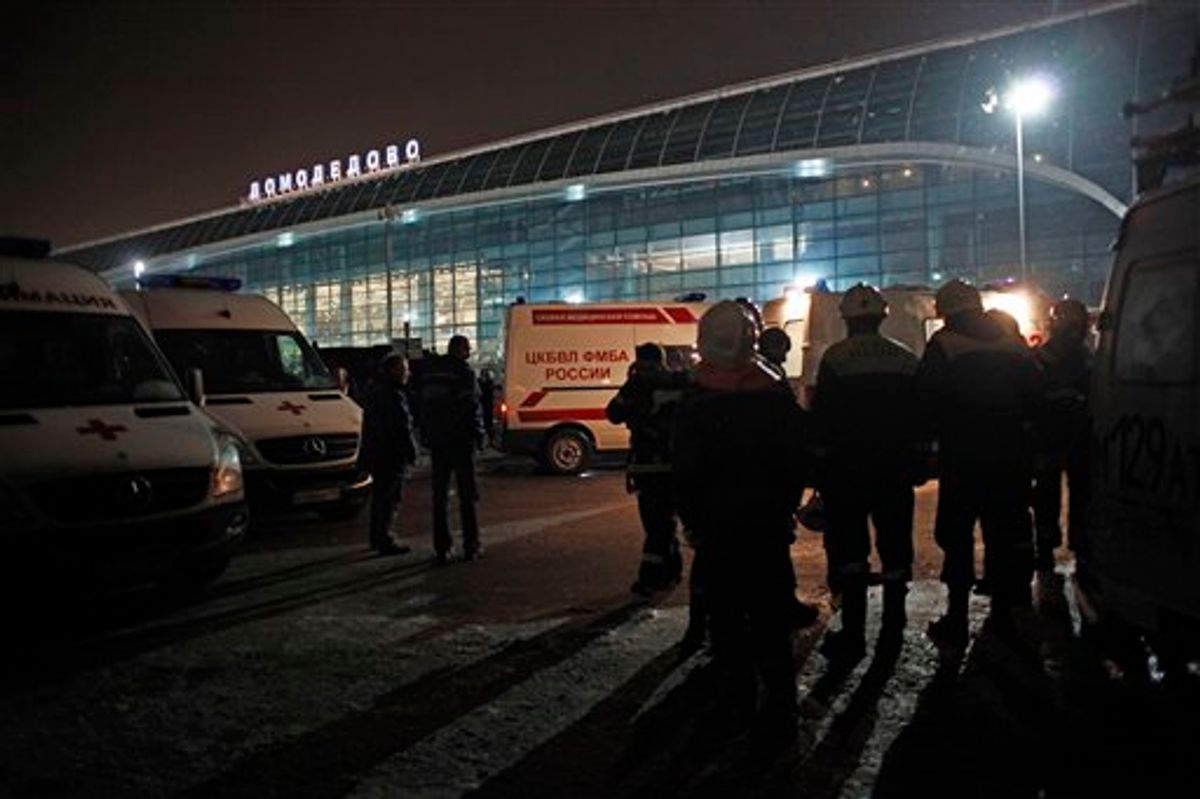 On Monday afternoon, a suicide bomber at Moscow's busy Domodedovo Airport killed at least 35 people and wounded scores of others.

Authorities don't yet know who carried out the attack, or why, though suspicions point to Chechen militants or other "local" Islamic separatists. Whoever the culprit was, one thing is clear: Air travel continues to be the target of choice for high-profile terrorist bombings. This has been the case for decades, and remains so.

And although airplanes themselves are historically the choicest target, attacks inside terminals are nothing new. In 1972, the Japanese Red Army killed 26 people in the arrivals lounge at Israel's Lod Airport (today Ben Gurion International). In 1985, the Abu Nidal group killed 20 in a pair of coordinated ticket counter assaults in Vienna and Rome. There have been smaller-scale assaults as well. In 2002, a gunman killed three people near the El Al Airlines ticket counter at Los Angeles International Airport.

Already experts are calling into question the security protocols at Domodedovo, one of three large airports serving the city of Moscow. In 2004, they point out, a pair of female suicide bombers boarded two jets at Domodedovo, killing all 90 people aboard both flights.

Thorough and effective security should be a given at any major airport. But that same security needs also to be rational, and some of the things I'm hearing should give us pause.

"Aviation security experts have been warning since the Sept. 11, 2001, terror attacks," states one Associated Press story on Monday's bombing, "that the crowds at many airports present tempting targets to suicide bombers. Arrivals halls are usually open to anyone."

This same sentiment is popping up in much of the coverage, with the implication that our airports aren't yet secure enough -- and that only more barricades and scanners and cameras and automatic weapons will make them so.

Domodedovo reopened shortly after the blast, but access to the terminals was closed off to everybody except employees and ticketed passengers. Metal detectors were moved to the entryways. That's pretty drastic, but imagine for a minute if this had happened in America. I reckon we'd have razor wire and blast walls out to the airport perimeter, with Transportation Security Administration checkpoints even in the parking lots.

As if, by moving the fences, they can't get us.

I submit this is precisely the wrong line of thinking. It is reactionary in the purest sense, and plays directly into the terrorists' strategy -- a strategy that encourages a response that is based on fear instead of reason, and that is ultimately self-defeating.

Reality is that we can never make our airports, or any other crowded places, impervious to attack. And while maybe you wouldn't mind living in a society in which every terminal, shopping mall, sports venue and subway station has been militarized and strung with surveillance equipment, count me among those who would.

If only there were a way of preempting the hysteria. Instead of building walls and barricades, we need to build a stronger national character -- one that resolves to thwart such atrocities, indeed, but also one that is able to come to terms with a certain, inevitable vulnerability.

Wishful thinking, maybe, in such a fear-addled society as ours.