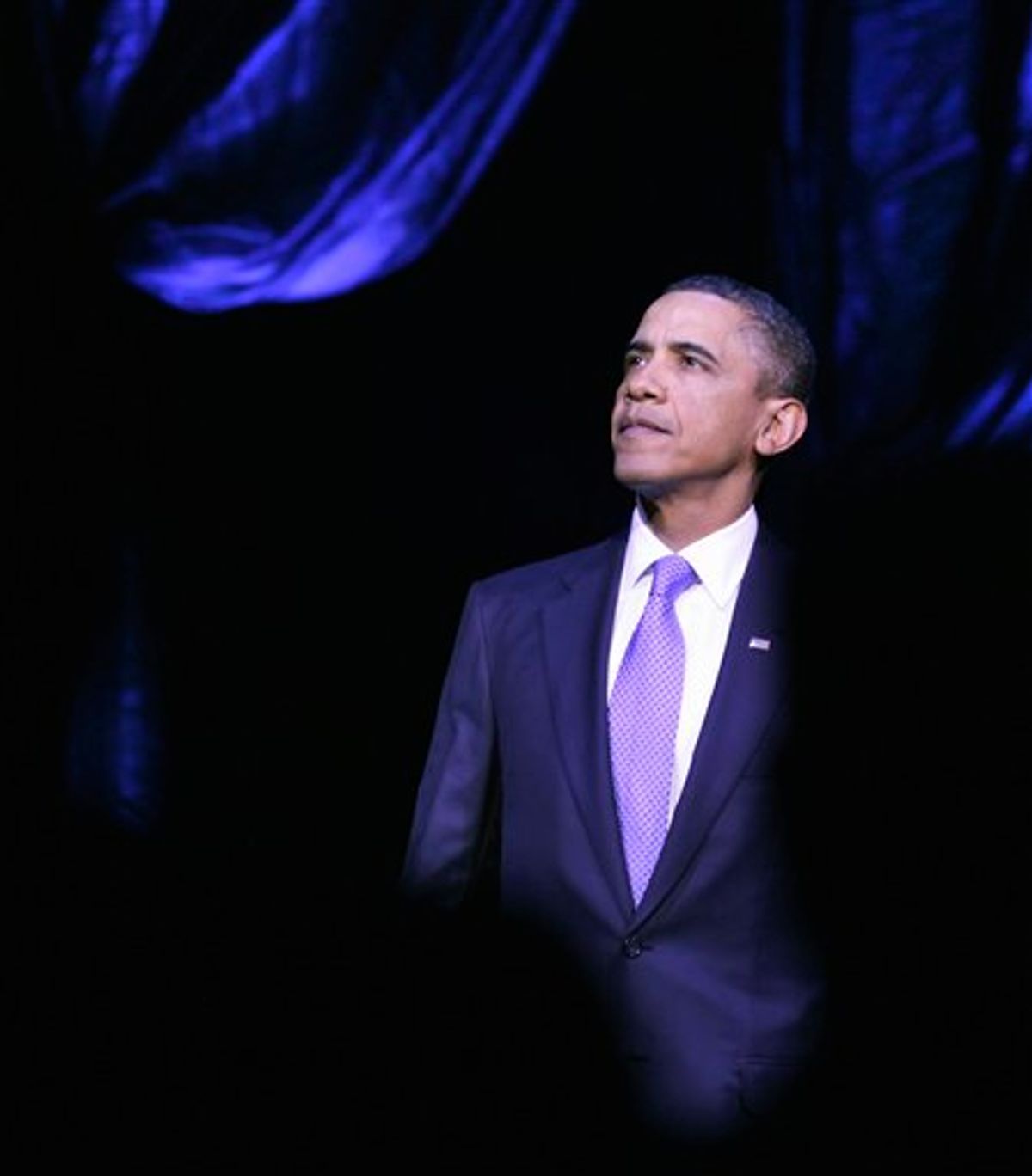 President Barack Obama looks up to the audience as he arrives at an event to celebrate the 50th Anniversary of John F. Kennedy's inauguration address, Thursday, Jan. 20, 2011, at the Kennedy Center in Washington. (AP Photo/Carolyn Kaster) (AP)
--

Everyone knows that Barack Obama can deliver a good speech. But don't expect one tonight, when he delivers his State of the Union address. Obama excels when he can drill down deep and expound on a single meaningful theme -- like race in America, or the tragedy in Tucson, Ariz., or the astonishing narrative of his own life. But a typical State of the Union speech is much more diffuse. How do you simultaneously create a single forceful message out of the clashing politics of a country so profoundly fractured?

Even more difficult, Obama, like any presidential politician, wants to represent how the majority of voters feel. But on the agenda that currently faces the country -- spurring economic growth while simultaneously reining in the deficit -- the majority's views do not add up. As the New York Times reported last Friday, Americans want lower government spending and government action on jobs but they don't want their entitlement programs tampered with and they don't want higher taxes. The math on that equation doesn't work.

Nonetheless, what we are likely to hear from Obama tonight is an attempt to thread that impossible needle, to cast himself as a fiscal conservative while defending the spending priorities already advanced in his first two years. Even the greatest orator of all time would find it hard to pull off this magic trick.

A good example is the latest news from ABC's Jake Tapper, who reports that Obama "will call for a ban on earmarks and he will propose an overall budget freeze" in his speech tonight. This might sound like good politics -- everybody hates the idea of earmarks, in the abstract -- but it does little to grapple with the reality of the government's budget woes. In 2009, spending on 9,000 different earmarks added up to $16 billion, or about one-half of 1 percent of the annual $3.5 trillion federal budget. Nor is a "budget freeze" anything to celebrate when your operating annual deficit is over a trillion dollars.

What the two agenda items do share, however, is that they are not hard choices. A hard choice involves figuring out how to pay for Medicare -- whether by raising taxes or dramatically cutting costs. Obama says he wants new investment in education and infrastructure. But if you're going to simultaneously call for a budget freeze, what are you going to cut to pay for those new priorities? That's hard.

Maybe it is unfair to blame Obama for not lining up a list of sacrifices and tough choices in his speech. Because it's pretty clear, judging by the polling, and judging by how Obama's popularity has grown since his budget-busting tax cut deal, that the American people just don't want to make hard choices. And a politician who wants to get reelected has to represent the will of the people, even if the people's will is fraught with irresolvable conflicts.

If Obama took on that irresolvable conflict, if he pivoted from the fundamental tension that exists between making the long-term investments necessary for boosting "competitiveness," the importance of maintaining a robust social safety net in times of economic hardship and the fiscal prudence implied by a balanced budget, and led his audience to an in-depth examination of U.S. spending hypocrisy, while presenting a game plan for getting us out of this cul-de-sac of contradictions, it would be the greatest speech of his life.

But don't count on it. By all reports Obama is going to stay away from entitlements, call for an earmark ban, and wave his hands at the necessity for promoting long-term competitiveness. It's the safe way to play it, but it won't get us anywhere.