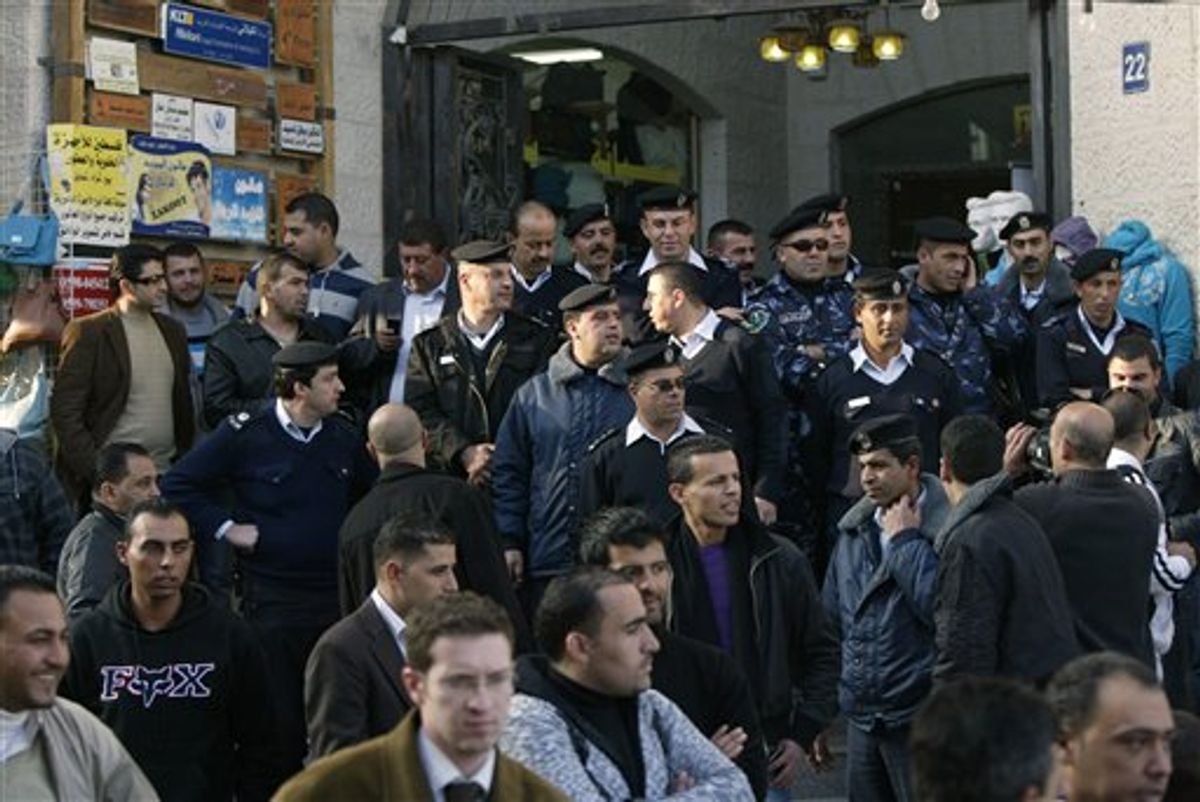 Palestinian police officers block the entrance to the Al-Jazeera TV office, after protesters vandalized it, in the West Bank city of Ramallah, Monday, Jan. 24, 2011. About 250 Palestinian protesters have smashed windows and sprayed graffiti outside the headquarters of the Al-Jazeera TV channel in the West Bank Monday. Al-Jazeera aired late Sunday what it said were leaked documents showing that Palestinian leaders agreed to deep concessions on two of the thorniest issues in negotiations with Israel: Jerusalem and the fate of Palestinian refugees. (AP Photo/Majdi Mohammed) (AP)
--

Another release of secret Palestinian documents acquired by Al Jazeera and reported on by the Guardian reveals a stark imbalance of concessions and a less than flattering portrait of American diplomacy.

The documents quote Condoleeza Rice, secretary of state under George W. Bush, suggesting the relocation of millions of displaced Palestinians to South America. “Maybe we will be able to find countries that can contribute in kind… Chile, Argentina, etc.,” Rice said. The suggestion avoids negotiating ways to peacefully allow the refugees back onto the contested Palestinian land from which they were driven.

Hillary Clinton appears in the leaked records, as well. Her refusal to acknowledge any Palestinian leadership other than Mahmoud Abbas and prime minister, Salam Fayyad stands out. Based on senior officials remarks, the U.S. does not want to fund the Palestinian Authority with new faces at the helm.

Not only did the U.S. advocate for lofty Israeli demands, but Palestinian negotiators also agreed that only a fraction of refugees -- 10,000 out of more than 5 million -- should be permitted to return to Israel. Additionally, Palestinian leaders accepted hugely controversial demands by Israel to be defined as a Jewish state. Former Israeli Prime Minister, Tzipi Livni, is further recorded as requesting population “transfers” of the Palestinian people -- "transfers" meaning the relocation of Palestinian people to another state without their consent.

In thousands of pages, the documents expose the inner-workings of many failed peace talks since the 1990s and illuminate a power disparity that has sparked Palestinian outrage.  Protests in response to the documents have broken out in the West Bank since the release of the information by Al Jazeera. The Palestinian Authority holds that the records are mere propaganda efforts to slow peace progress.