The secret math behind the Super Bowl 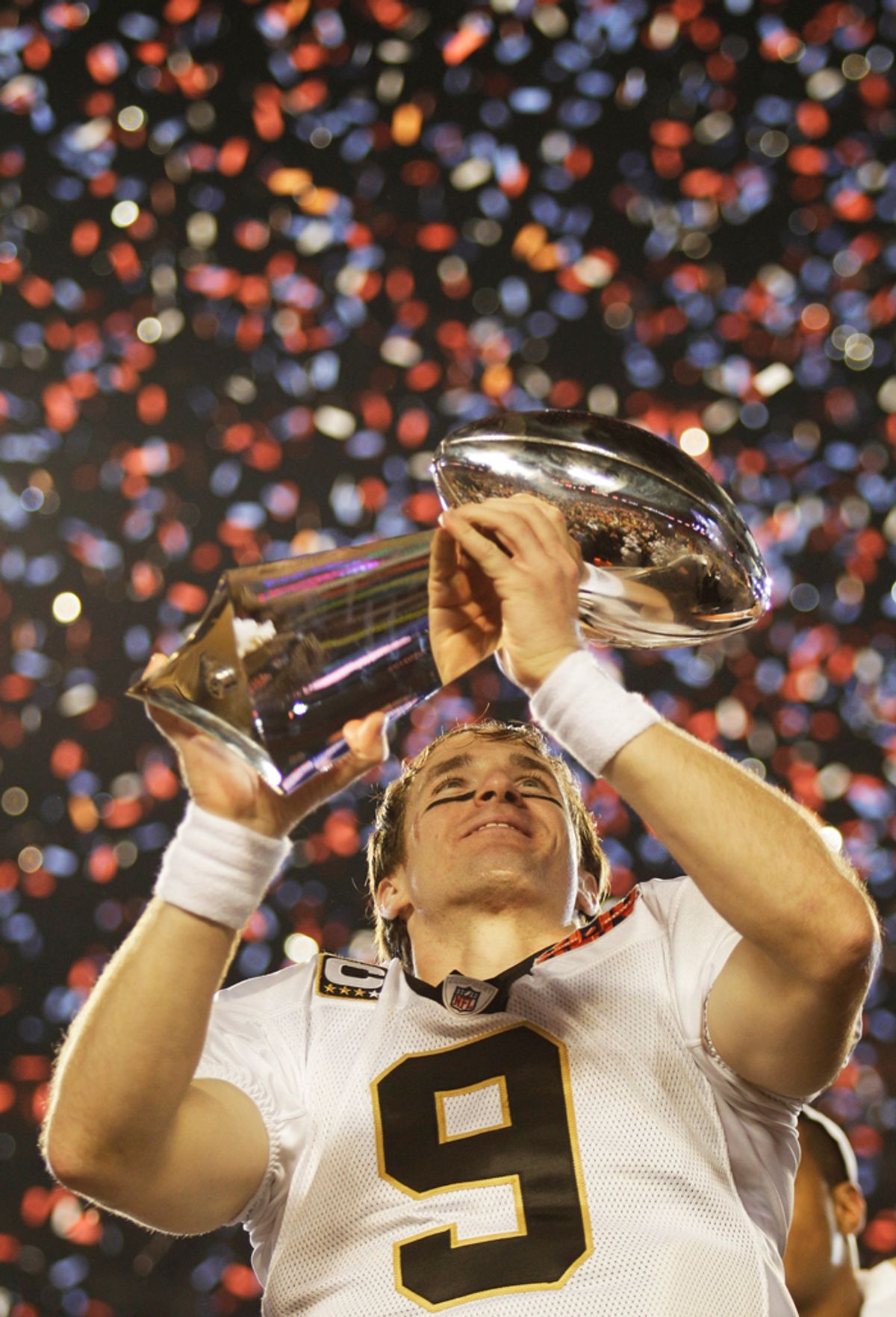 The noise level and the sun rose in tandem. A couple of nights earlier the New York Yankees had won the 2009 World Series, and now, on this chilly November morning, it was time for their parade. Fans had been lining the streets of lower Manhattan since the infomercial hours. By 7:00 A.M. the crowd was ﬁve deep. An hour later the inevitable "Let's go Yankees, tap- tap- taptaptap" cheers began. Kids pulled from school sat regally on their parents' shoulders. The New York cops, their spirits buoyed by the overtime they were racking up, were uncommonly friendly. Wall Street traders and analysts and bankers peered from their ofﬁ ces overhead and smiled for one of the few times all year. The motorcade wouldn't crawl past until noon, but in a congenitally impatient city where no self-respecting pedestrian waits for the light to change, this was the rare occasion when millions of New Yorkers stood happily along Broadway for hours.

The 2009 World Series parade attracted more than 3 million fans -- a greater mass of humanity than the entire market of some MLB teams. Among the crowd: former mayor Rudy Giuliani, Spike Lee, and Jay-Z, who performed the civic anthem at the time, "Empire State of Mind." There were the obligatory keys to the city, mayoral proclamations, and a forest's worth of confetti. It was a tidy snapshot of why the Yankees might be the most polarizing team in all of sports. While the rest of the country seethed and cursed the arrogance and excess, Yankee Nation gloated over still another World Series triumph, the twenty-seventh in the franchise's storied history. Mocking, of course, the milk ad campaign, one T-shirt sold at the parade tauntingly asked of other teams' fans: "Got Rings?"

The answer was probably "no," or at least "not many." The World Series has been held since the early years of the twentieth century, yet only a few franchises have won a signiﬁcant number of titles. Eight current organizations have never won a World Series, and nine others have won fewer than three. The Texas Rangers have been around in one form or another since 1961, and prior to 2010 they had never even been to the Fall Classic, much less won it. In contrast, since 1923, the Yankees have won on average once every three years.

As a rule, we're offended by oligopolies and monopolies. We much prefer competition; it's healthier, it's better for consumers, it encourages innovation, it just feels fundamentally fairer. We have antitrust laws to promote competition. We're careful to crack down on cartels and regulate industries -- yes, some more than others. In the heavily regulated airline industry, the largest carriers in the domestic market, American and Southwest, each have less than 14 percent of the market share. Banks, too, are heavily regulated, so much so that under the so-called Volcker Rule, no institution may exceed a 10 percent market share. Citigroup may have been deemed "too big to fail," but its market share is only 3 percent. Walmart might be the American company most maligned as a monopoly, but in 2009 its share of the $3 trillion U.S. retail market was 11.3 percent.

The Yankees? Inasmuch as World Series rings constitute a market, their market share is 25 percent.

How can one team dominate like this while other teams are barely competitive? The quick and easy answer is money, especially in the absence of a salary cap. Fans of 29 other teams will note that when the Yankees can spend north of $200 million on players, as they did in 2009, and most other teams spend less than $100 million, they're naturally going to have a heavy concentration of titles. They'll handily beat the Phillies -- their opponents in that World Series -- who spent "only" $113 million on payroll. Just as in the previous year, the Phillies ($98 million) beat the Tampa Bay Rays ($44 million), and the year before that the Boston Red Sox ($143 million) beat the Colorado Rockies ($54 million). No wonder the small-market Pittsburgh Pirates -- 2010 payroll, $39.1 million -- haven't had a winning season since 1992.

However, the reason for the Yankees' extraordinary success is more complex than that. Just about everything in baseball's structure militates against parity. Start with the 162-game season. In the same way an opinion poll sampling 100 subjects will be a more precise reﬂection of the way the public thinks than a poll sampling 10 subjects, baseball's long season lends itself to an accurate reﬂection of talent. If two teams play one game, anything can happen, but if they play a good many games, the better team will win the majority of the time.

Then consider the playoffs. Only the eight best teams make it to the playoffs, so 22 are out of the running. Teams play a best-of-ﬁve-game series followed by a best- of- seven League Championship Series followed by a best-of-seven World Series. As with the regular season, the sample size is large enough that the best team ought to win the series, especially with a home ﬁeld advantage. The Yankees may be the best team in baseball because they buy the best players, but the imbalance is allowed to ﬂourish because of baseball itself.

Contrast this with the NFL, the league that openly strives for parity and democracy. The season spans only 16 games, hardly a robust sample size. A few breaks or injuries could represent the difference between a 7–9 season and a 9–7 season. Not only do 12 teams qualify for the playoffs, but there is no "series format." It's single elimination, "one and done," a format much more conducive to upsets, much more likely to generate randomness. One unlucky game, one untimely injury to a star player, and it's easy for a lesser team to win and move on. Plus, until 2010 there was a salary cap that prevented the wealthy teams or the teams blessed with cavernously pocketed owners from outspending their rivals by factors of three and four. And with the bulk of team revenue coming from leaguewide television contracts, the schism between the economic haves and have-nots is much narrower than in baseball.

The result? As you'd expect, the concentration of champions is lowest in football, the "market share" remarkably balanced. The NFL has been holding the Super Bowl only since 1967, but already 18 of the 32 franchises have won the Lombardi Trophy and all but 4 have appeared in the Super Bowl at least once. (That's almost the same number of teams that have never been to the World Series -- and they've been holding that since 1903.) Market size doesn't matter much, either. Most Super Bowls? The Steelers, with six, hailing from ... Pittsburgh, the same town that hasn't ﬁelded a competitive baseball team in almost 20 years. The Packers from Green Bay, Wisconsin, the smallest market in major U.S. professional sports, have won three titles.

There are far more than 16 games in the NBA and NHL regular seasons, and the playoffs are seven-game series. That cuts against randomness and in favor of the monopolies. In contrast, unlike in baseball, more than half the teams make the postseason. And the NBA and NHL both have a salary cap. So we shouldn't be surprised to learn that the concentration of champions in pro basketball and hockey is signiﬁcantly greater than in the NFL and signiﬁcantly less than in Major League Baseball.

Three months after the World Series parade in New York there was a similar processional for the Super Bowl champs in small-market New Orleans. The city sported a few hundred thousand fans rather than a few million. And this wasn't the franchise's twenty-seventh title; it was the ﬁrst. But it was just as jubilant. A week before Fat Tuesday, players rode around on ﬂoats, wearing masks and tossing beads. Lombardi Gras, they called it.

Tobias J. Moskowitz is the Fama Family Professor of Finance at the University of Chicago and the winner of the 2007 Fischer Black Prize. L. Jon Wertheim is a senior writer for Sports Illustrated. Together, they are the authors of "Scorecasting: The Hidden Influences Behind How Sports are Played and Games are Won."