The odd appeal of the "Celebrity Rehab" train wreck

The show's new season, with Leif Garrett and Eric Roberts, has been astonishingly weird -- and surprisingly moving 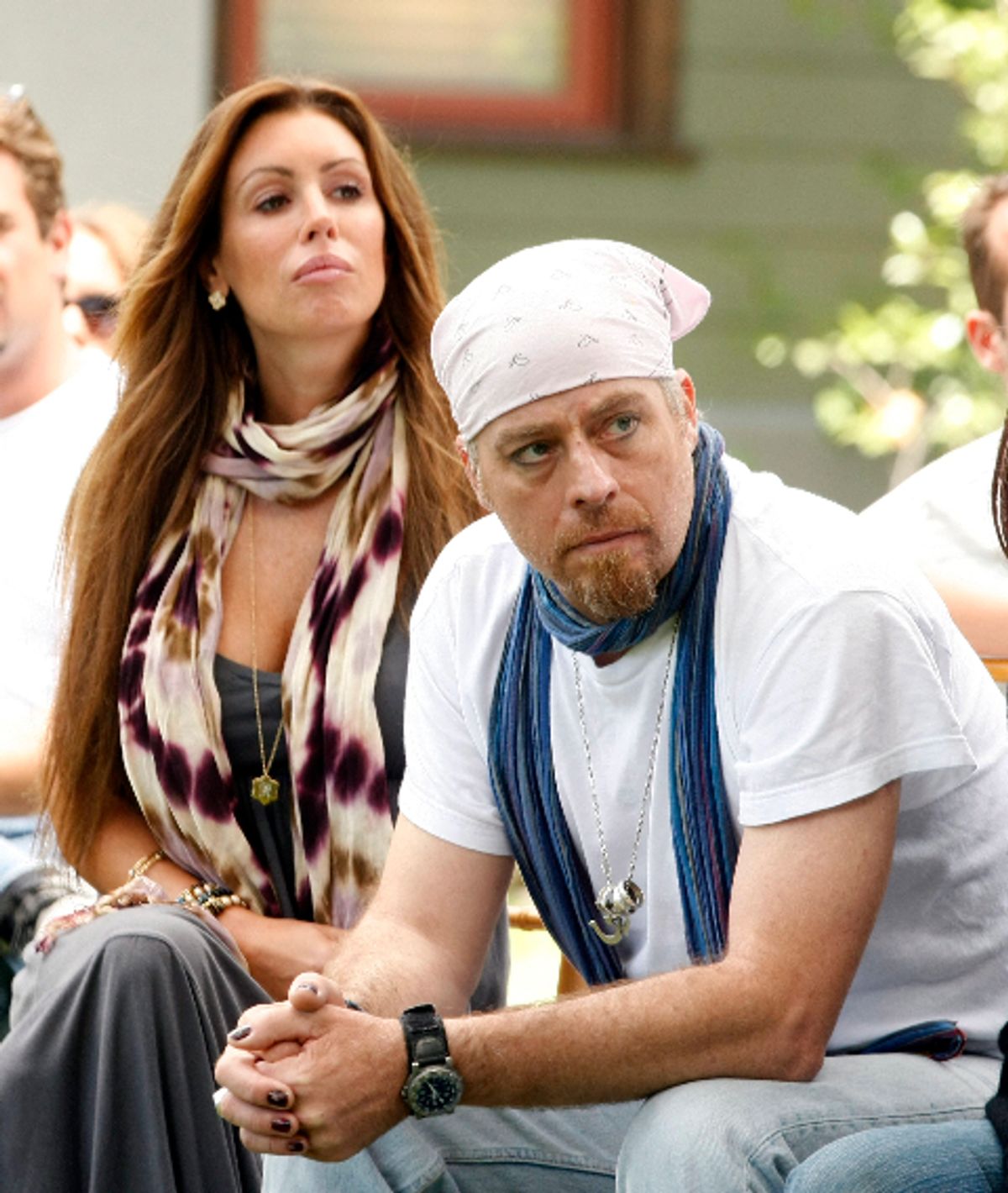 "Celebrity Rehab" works hard to pretend there's nothing odd or unhealthy about turning people's intimate agony into a TV show, but there are times when the VH1 series has no choice but to admit how bizarre it is. There was a moment like that in Season 4, which wraps up tonight (10 p.m./9 Central) with a live episode. Actor Eric Roberts, who rose to fame in the '80s giving intense, scuzzy Method performances, segued into hambone roles in action films and erotic thrillers, and became a semi-pariah after domestic abuse charges and bizarre behavior, told the show's head therapist and host, Dr. Drew Pinsky, about his estrangement from his stepson, singer-songwriter Keaton Simons. Apparently the two hadn't spoken in 16 years, thanks to an incident where Roberts woke from a heavily sedated sleep and screamed at Simons and his then high-school-age buddies for playing their instruments too loud, and things escalated to the point where Roberts, who had a history of threatening Simons with violence, rushed at him, and Simons hit him with a bat and broke one of his ribs. After a couple of follow-up discussions with Roberts, Simons and Roberts' wife, Eliza Garrett, Dr. Drew arranged for the stepfather and son to reunite on the show.

"What an interesting way to do this," said Simons, facing his stepfather for the first time in nearly two decades while VH1's cameras rolled. "I never pictured it being ... like this."

Simons didn't gesture at the camera or the lights as he he said the phrase "like this," but he didn't have to. There was something in his eyes -- and in the trace of a contemptuous smile -- that spelled it out for us. I can't imagine going on national TV to reunite with somebody I hadn't spoken to in almost 20 years following an incident involving a baseball bat. But then, I'm not an addict or an exhibitionist, descriptions that fit every celebrity rehab participant to some degree -- even Simons, who seemed like the most sensible and functioning person to appear in Season 4. (He might have decided to kill two birds with one stone, boosting his musical career while helping his stepdad get his mind right in the only venue that worked for him: a forum in which he could give a sensitive, thoughtful performance as Eric Roberts.)

I never quite got a handle on what Roberts was in rehab for; I read it was for psychological dependence on marijuana, a non-addictive drug, but season four barely got into the details, and made it seem as though Roberts was mainly addicted to rage and confrontation. But all in all he seemed pretty laid-back compared to many of the other participants -- except when Dr. Drew broached the topic of reconciling with his stepson on camera, and you could see the attention hound in Roberts trying very hard not to leap out of his chair and scream, "Yes!" When Roberts finally faced his stepson and discussed the incident with him, they both danced around the creepy, invasive strangeness of doing this on national TV, vaguely acknowledging the matter without delving into it, and then Roberts couldn't stand it anymore and hopped up out of his chair and hugged Simons. They both seemed legitimately moved. I'm not inclined to doubt their sincerity because 1) it is possible to have authentic human moments in utterly contrived circumstances, and 2) both these men are professional performers, which means they're wired differently from civilians. But nevertheless: Weird!

"Celebrity Rehab" is itself a weird show -- truly, deeply, profoundly weird. It's a hothouse series -- "Big Brother" with a therapeutic component, a human zoo that places bottomed-out semi-celebrities under surveillance, then turns their odyssey toward bodily integrity and psychological truth into a TV melodrama, complete with teasers and flashbacks and music montages and narration. The series feasts on the exhibitionism of its participants. Most are better known for getting in trouble than for any substantive creative achievements -- and that's how America prefers it, really. It doesn't matter if these people are famous for being actors or musicians or athletes or reality show participants or for being vaguely related to somebody more famous than themselves (a description that fits Season 4 participant Frankie Lons, the booze- and drug-addicted mother of Keyshia Cole). They're just another source of entertainment for most people, another thing to watch and read about and obsess over. After a certain point the semi-famous figure this out and try to find ways to play along -- maybe even turn the media and the public's voyeurism into personal redemption and career capital. As adventures in self-exploitation go, that's not too shabby.

I can't tell you anything that Season 4 participant Leif Garrett has done since the 1970s, when he was a Teen Beat-type musician/actor/heartthrob, but I can tell you that he's been addicted to all sorts of drugs (including heroin, which is the substance he was trying to kick on this season of "Rehab") and that he got in a DUI-related car wreck in 1979 that crippled his best friend. I don't know anything that Rachel Uchitel ever did besides sleep with Tiger Woods and have a lover who died on 9/11; I know the first fact from coverage of the Woods scandal, and the second from a segment of "Celebrity Rehab." I think she was addicted to prescription medication, but I wouldn't swear to it; the troubles of the "Celebrity Rehab" participants blur together after a while.

I've seen Jeremy London, who was on "Rehab" this season, in a lot of movies and TV shows (including "Party of Five"), but any decent work he ever did as an actor was obliterated by the bizarre incident where he was allegedly kidnapped and forced to smoke crack, and now even that strange interlude has been eclipsed by his appearance on "Rehab," where he tried to kick a prescription medication habit and confronted his glassy-eyed wife, Melissa Cunningham, over her own drug-related outrages, the worst of which was selling (possibly invented) stories of London's abusiveness to the National Enquirer. Janice Dickinson was a supermodel once, but now she's known mainly for getting wasted, berating photographers and embarrassing herself on reality shows.  Jason Davis, grandson of the late billionaire Marvin Davis, is an insufferably smug party animal who appeared on "Millionaire Matchmaker" and then checked into "Celebrity Rehab," where he made fun of Dickinson's surgery-sliced, Botoxed face, tried and failed to escape the facility and go to a strip club, and generally behaved like a hateful, decadent swine whose default expression is a sneer. (Every time he opened his mouth, I wanted to reach into the TV screen and smack him.) Jason Wahler, a former castmember on "The Hills," was also on season four, but no so you'd notice; he was seen mostly in silent reaction shots, except for one notable scene where he discussed his addictions with his parents and Dr. Drew, and suggested that he might not have gotten into this mess if he hadn't become famous via unscripted TV and then been invited to be a paid guest at promotional events, where he got paid $5000 to stand around and drink all night. (And here he was on yet another unscripted series, undoing the damage done by all the other ones. Reality TV taketh away, and reality TV giveth.)

For all its bizarre artifice -- and its high proportion of "WTF?" moments, like the bit where Dr. Drew stood before a "Celebrity Rehab" camera and chastised the tabloid media for exploiting Rachel Uchitel's stint in rehab -- moments of real pathos and power shone through. I was moved by Garrett's admission that he wanted to finally get clean because his mother was dying of cancer, and by the affecting close-ups of the rehabbers asking their relatives for support and reacting to ex-"Celebrity Rehab" participants who got clean on the show: Mackenzie Phillips, Tom Sizemore, Alice In Chains bassist Mike Starr.

But there were many more down-the-rabbit-hole moments -- and those were the real draw. The most surreal was when Simons performed a song for an audience of rehabbers as a screen showed slides of the disgraced celebrities as innocent children, then as adults embracing friends and family, then brought it all home with photos from their stint in the very show that they were currently making. What VH1 did here was find a way to turn real people's lives into a tear-jerking music video without having to edit one. I'd ridicule it if it weren't such an appealing postmodern pretzel -- and if I hadn't seen similar multimedia performances at real-life weddings and funerals and been moved. Just because a moment is stage-managed doesn't mean you can't find something real in it. You have to be able to do that, otherwise you can't live in the world. It's a 21st century survival skill.