Do Republicans really want to run against this guy?

For two years, the GOP has claimed that Obama can't do optimism, but now he's proven them wrong 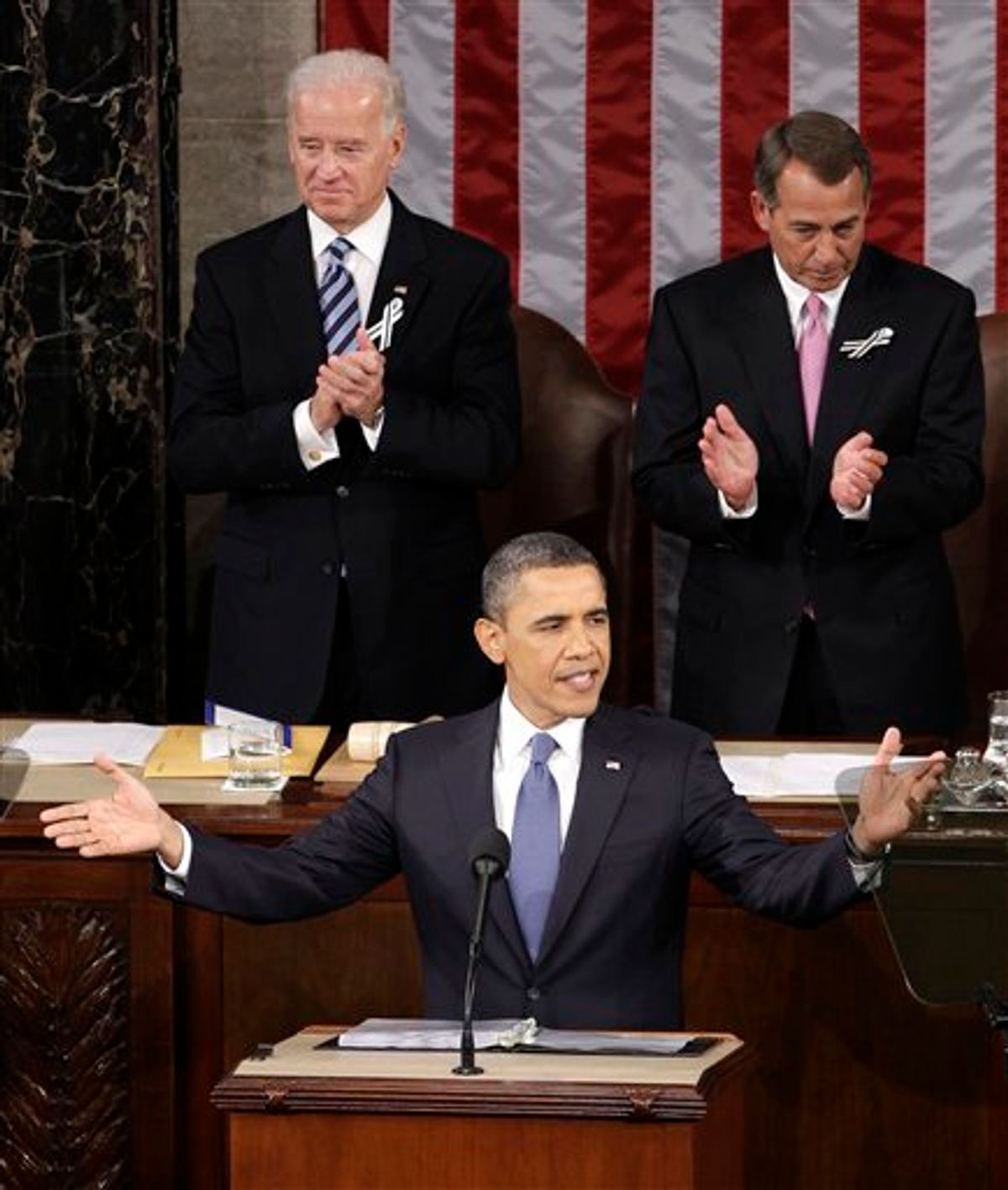 Let's not read too much into the long-term political significance of President Obama's speech last night, since we know that State of the Union addresses -- no matter how much pundit praise they receive and no matter how encouraging the insta-polls look -- basically never lead to a significant uptick in a president's popularity.

But I'd also agree with NBC's First Read that the contrast between Obama's address and the official Republican response from Rep. Paul Ryan was striking. Obama's message was inherently upbeat, optimistic, and future-oriented, while Ryan was left warning that our best days may be behind us and that Americans are being lulled into "lives of complacency and dependency." Plenty of commentators noticed that Obama, at least stylistically, seemed to be channeling Ronald Reagan -- which, I would say, made Ryan seem a little like Walter Mondale, who spent the 1984 campaign warning of the dangers of high deficits and nuclear proliferation. (This ad sums up perfectly the message Mondale ran against Reagan with.) The irony, of course, is that one of conservatives' favorite talking points the last two years has been that Obama lacks Reagan's sunny optimism and boundless faith in the future -- that he'd rather talk about what's wrong with America than what's right about it. But it was the GOP that came off as the party of gloomy pessimism last night.

I do wonder if Republicans are aware of how problematic this contrast may be for them in 2012, especially if Americans believe the economy is improving.

Last month, I noted how much our political culture seems to have learned from the aftermath of 1994, when Bill Clinton was written off by everyone after a devastating midterm only to bounce back and win an easy reelection in 1996. Back then, it took Clinton months to regain the respect of the media, his political opponents, and even his own party. At the start of 1995, Republicans universally believed that they'd take back the White House in 1996. But the reaction to last November's midterm was much different. Obama essentially shrugged it off, made some conciliatory gestures, and quickly racked up an impressive list of lame duck legislative triumphs. His approval rating is now higher than it's been in months. Obama didn't have to fight the "irrelevant" label that was slapped on Clinton after the '94 midterms. Everyone knew better.

It seems possible, then, that Clinton's example is also having an effect on the GOP's 2012 field. The lack of candidate activity has received plenty of attention. There are some logical explanations for this. Many prospective candidates have probably been waiting for a clear signal from Sarah Palin, plus, thanks to Fox News, it may just be more efficient for Republicans eying the White House to act as cable commentators and hosts right now, instead of traveling from town to town in Iowa and New Hampshire. But it's also worth wondering if the delay has to do with Republicans learning from '94 -- and if Obama's performance last night (and the contrast with the dour Ryan) won't reinforce a sense that the '12 nomination may end up being fool's gold, no matter how well the GOP did in 2010.

As I've written over and over, if the economy improves significantly, Obama pretty much can't lose in '12; and if doesn't improve (or if it gets worse), he probably can't win. But if it's somewhere in between? Well, then the fact that most Americans still like him, still want him to succeed, and still like hearing him speak probably comes into play. As First Read put it today: "This will ultimately be a challenge for the Republicans competing against Obama in 2012. How do you both criticize his policies and chart a new course, but also remain optimistic?

In this sense, it may be wise to split the potential GOP field into two tiers: Those who can afford to wait, and those can't. For instance, Mitt Romney has been out of elected office for four years now and will be 65 years old in 2012. Realistically, then, '12 is probably his last best shot at being president. Yes, he'd be the same age in 2016 that Ronald Reagan was in 1980, and Reagan was several years removed from his governorship back then, too. But Reagan had established himself as the leader of the rising "New Right" movement. Romney lacks that kind of hero status with the party base. He'll just be too much of a has-been if he tries to wait until '16. (In fact, he may already be too much of a has-been for '12.) So even if he's starting to think that Obama will be tougher to beat than he initially expected, it's now or never for Romney -- he can't afford to wait.

I'd say the same about Tim Pawlenty, but for a different reason: He's also now an ex-governor and he hasn't been around the  track yet in a national campaign. For him, '12 could be a good opportunity to run the kind of "better than expected" primary campaign that lays the foundation for a follow-up bid down the road. (And who knows: If the field is thin, he could even end up the nominee -- and the nomination may end up being valuable. This is essentially the story of how Bill Clinton won the Democratic nomination and the presidency back in 1992.)

In the "can afford to wait" category, I'm tempted to place Mike Huckabee. He's been out of office for four years too, but his visibility and relevance aren't diminishing at all. He's got a national television platform and has a bond with a significant portion of the GOP base. If Huckabee were to pass on '12 and Obama were to be reelected, I think he'd emerge (reasonably) well-positioned to compete in 2016. But if he were to run next year and lose, that would probably be it for him. Maybe this has something to do with the mixed signals he's sending about a '12 campaign, even as polls suggest he could actually be the front-runner if he chooses to run?

Obama, of course, is hardly a shoo-in for 2012. But the last few weeks have offered reminders of how he could well become one as the '12 process unfolds. And that could have something to do with why Republicans seem a lot less eager to jump in to the presidential race than they were the last time  a Democratic president suffered a midterm "shellacking."