Citigroup bailout has netted government $12.3B in profit to date

Treasury auctions off another $300 million in Citigroup warrants, acquired during the controversial 2008 bailout 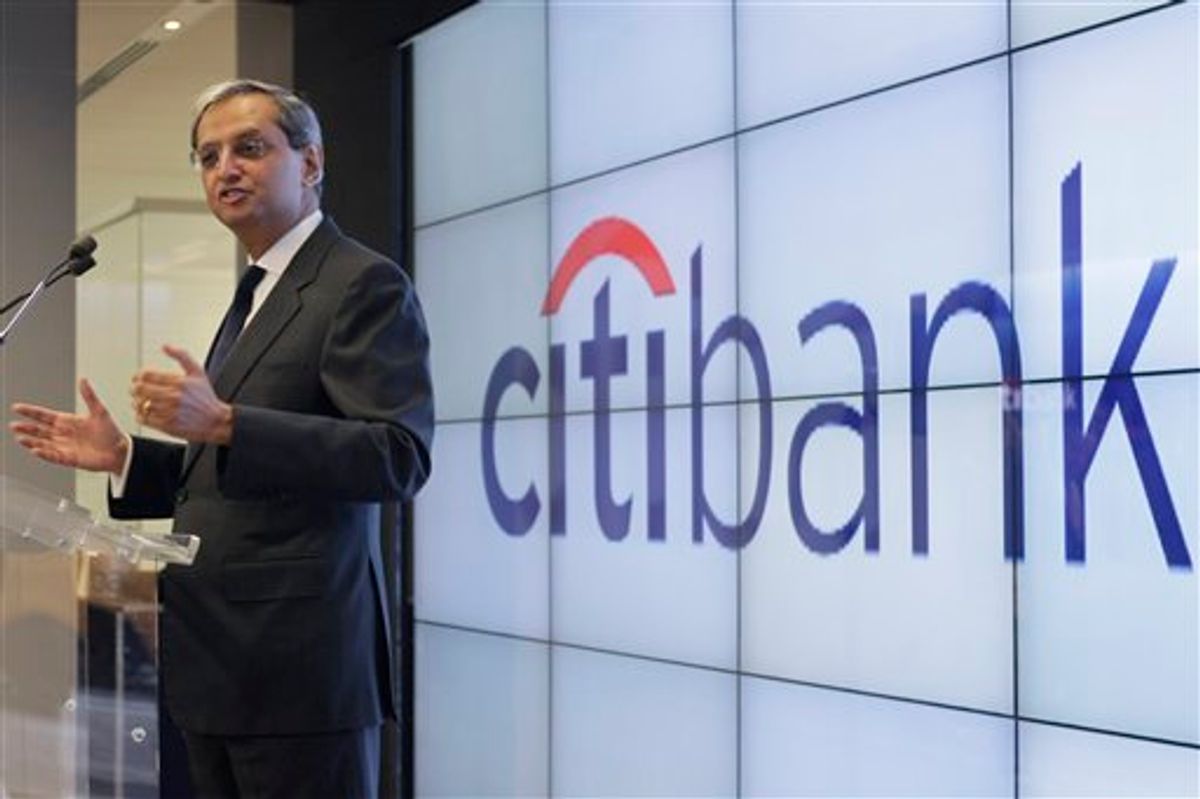 FILE - In this file photo taken Dec. 16, 2010, Citigroup CEO Vikram Pandit speaks during Citibank's new high-tech banking center opening in New York's Union Square. Citigroup has reported fourth-quarter earnings of $1.31 billion Tuesday, Jan. 18, 2011, or 4 cents a share, after losses from its loans declined and the bank was able to dip into the reserves it keeps aside for bad loans. (AP Photo/Mary Altaffer, file) (AP)
--

The Treasury Department said Wednesday it has received $312.2 million from the sale of warrants it held in Citigroup Inc. The sale was the government's latest effort to recoup costs from the $700 billion financial bailout.

Treasury said with the warrant sale it has realized $12.3 billion in profits from the $45 billion in support it provided Citigroup during the height of the financial crisis beginning in the fall of 2008.

By purchasing the warrants, buyers will have the right to buy an equal amount of shares of Citigroup at a fixed price.

Citigroup received $45 billion in taxpayer support late in 2008 in one of the largest baiouts undertaken by the government as it struggled to contain the financial crisis.

The government has recouped all of the $45 billion in support it provided Citigroup through the Troubled Asset Relief Program.

Treasury's remaining interest in Citigroup consists of trust preferred securities with a principal value of $800 million. Those securities are being held by the Federal Deposit Insurance Corp. to protect against possible losses on debt of Citigrup that is being guaranteed by the FDIC.

If the FDIC does not incur any losses on those guarantees, the $800 million in Citigroup securities will be turned over to Treasury, further boosting the government's return on its Citigroup investment.

"Our investment in Citigroup has produced a significant profit for taxpayers," Tim Massad, Treasury's acting assistant secretary for the bailout program, said in a statement. "As we exit our investments ... it's clear that the cost of the TARP program will be a fraction of what many had once feared during the depths of the crisis."

Treasury provided a total of $410 billion in disbursements from the TARP fund. With the Citigroup warrant auction, the amount that Treasury has received back in repayments and income on its investments totals $271 billion, Treasury said.