The roots of Fox News 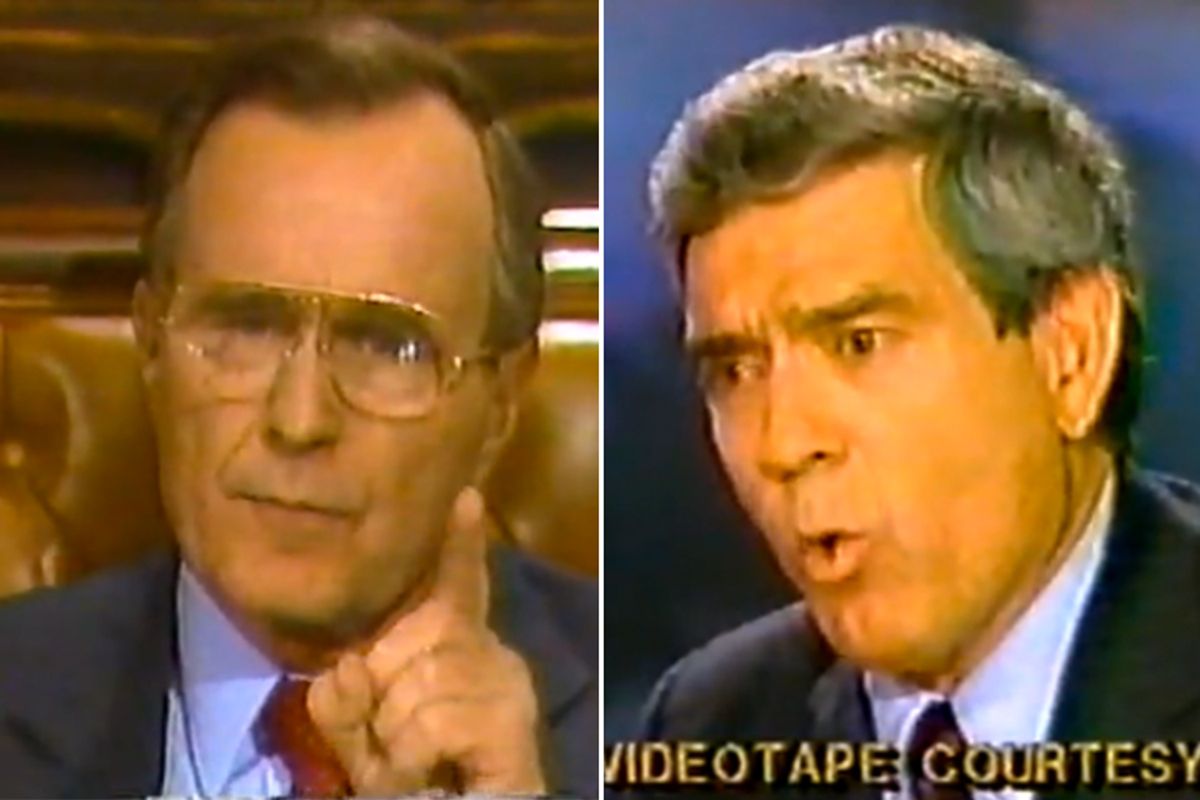 George H.W. Bush and Dan Rather
--

You're forgiven if you don't immediately recognize the video below, but when it originally aired 23 years ago this week, it touched off a national firestorm -- one that, in hindsight, is useful in understanding the rise of the Fox News Channel.

First, the setup: It was Jan. 25, 1988, and George H.W. Bush, then the vice president and the front-runner for the Republican presidential nomination, had agreed to a live interview with Dan Rather, who was then in his seventh year as the anchor of the CBS Evening News. The caucuses in Iowa, where Bush was locked in an unexpected fight with Sen. Bob Dole, were two weeks away and the vice president, as had been the case for more than a year, was being hounded by the press over what he'd actually known about the Iran-Contra affair. He was also, as he'd been since he'd landed on the national stage a decade earlier, dogged by doubts about his toughness. "Fighting the wimp factor" was the headline Newsweek had used for a cover story on Bush the previous fall. Before the interview began, CBS ran a five-minute package that laid out all of the questions about Bush's Iran-Contra role, then the fun began:

And that wasn't the end of it. After Rather cut him off and ended the segment, an irate Bush, his microphone still in place and open, stood up at his desk and began ranting at the CBS technicians in his office:

"The bastard didn't lay a glove on me ... Tell your goddamned network that if they want to talk to me to raise their hands at a press conference. No more Mr. Inside stuff after that."

The confrontation, which dominated the national news for the next few days, was immediately beneficial for Bush. His cool aggression -- note how effortlessly he works in the jab at Rather for walking off the CBS News set in protest the previous fall at the 6:35 mark -- was a revelation to many and helped toughen his image.

But the real impact was with the Republican Party base, which had long doubted Bush's ideological purity, and for good reason: Bush had run in the 1980 GOP primaries to the left of Ronald Reagan, belittling the Gipper's tax cut plan as "voodoo economics" and even expressing support for abortion rights. The factions of the party that Bush had been seeking to rally in that campaign were dying as the "New Right" Reaganites took over. By '88, the GOP's makeover into a top-to-bottom conservative party was virtually complete.  His status as Reagan's vice president (and the fact that he'd spent the entire Reagan presidency trying to make the GOP base forget about the '80 primaries) was enough to make Bush the '88 front-runner, but that hardly meant rank-and-file conservatives were enthusiastic.

Against this backdrop, the Rather interview was the best thing that could have happened to Bush. Among grass-roots conservatives, resentment of the national news media was an article of faith, but special scorn had long been reserved for Rather and his network and their "liberal bias." In the mid-1980s, in fact, Jesse Helms had actually helped launch a campaign to take over CBS, encouraging his national donor base to buy up shares. Richard Viguerie the direct mail pioneer who supported Helms' effort, said at the time: "In order to accomplish what we want politically, there is going to have to be a change in the media." The effort ultimately fizzled, but not before putting a real scare into CBS executives. It shouldn't have been surprising, then, that when the Bush-Rather interview aired just a few years later, the conservative grass roots immediately rallied behind the vice president. CBS' switchboard was overwhelmed with hostile phone calls, so much that the network was initially slow to defend Rather, unsure how widespread the rage was. Within a few days, a poll found that Republicans, by a 43-point margin, believed Bush had come out ahead. Among Democrats, Rather was declared the winner. (Independents tended toward Bush's side.)

It is difficult to quantify the exact impact of the Rather interview on Bush's relationship with the GOP's base, but clearly it didn't hurt. Despite an initial boost in Iowa polling, he did end up finishing a distant and rather humiliating third in the caucuses there two weeks later, behind both Dole and Pat Robertson. But he promptly bounced back to defeat Dole in New Hampshire the next week, and didn't lose a single primary or caucus after that.

There's also a much longer-term significance to the Bush-Rather showdown, in that it vividly illustrated the depths of the right's animosity toward Rather, CBS and the major national news outlets. Remember that back in 1988, there were still only three full-fledged broadcast networks (Fox, launched in 1986, only offered sporadic prime-time programming and had no news division), and when it came to cable news, CNN (and CNN Headline News, which then looped a 30-minute newscast day and night) was the only show in town. Newspaper and weekly newsmagazines were still dominant. There was no Internet to speak of. There were also millions of intensely engaged grass-roots conservatives who hungered for political news and commentary and who hated being forced to depend on the traditional major outlets. The explosion in conservative talk radio, don't forget, coincided with the rise of the New Right. Rush Limbaugh's show went national in '88, and by the early '90s was attracting nearly 20 million listeners per week: When it came to  news-related programming, conservatives represented a massive untapped market.

This, of course, is the market that Fox News sought to corner when it was launched in 1996, its "fair and balanced" slogan calibrated perfectly to resonate with conservatives who believed Rather and his cronies were anything but that. Early advertising on Limbaugh's show surely helped, too. Notably, Roger Ailes, the man deputized by Rupert Murdoch to give Fox News its identity, was a veteran of that '88 Bush campaign (and of the '68 Nixon campaign). Ailes had coached Bush in the run-up to the Rather interview and was in the room as Bush talked to the CBS anchor via satellite. It was Ailes, sensing that Rather would pepper Bush with Iran-Contra questions, who insisted that the interview be conducted live -- an unusual practice for a network newscast. Ailes understood that, when it came to appealing to the conservative base, playing by Rather's rules would do nothing for his candidate. But jawing with the anchorman and even getting in a crack about "those seven minutes when you walked off the set in New York"? That was a different story.

Of course, in building Fox News, Ailes has created the opposite anchor-guest dynamic, essentially establishing his network as a safe haven for conservative politicians from the mainstream media and its pesky, biased questions. It's no coincidence that so many of the GOP's potential 2012 White House candidates have Fox News contracts. Generally, it's only when Democrats appear on Fox that the news anchors start exhibiting Rather-ish aggression -- remember Bill Clinton with Chris Wallace in 2006? Or Barack Obama with Bret Baier last year? We're quickly reaching the point when the only time Democrats will appear on Fox -- or when Republicans will appear on MSNBC, for that matter -- is when they want to stage a George H.W. Bush moment of their own.