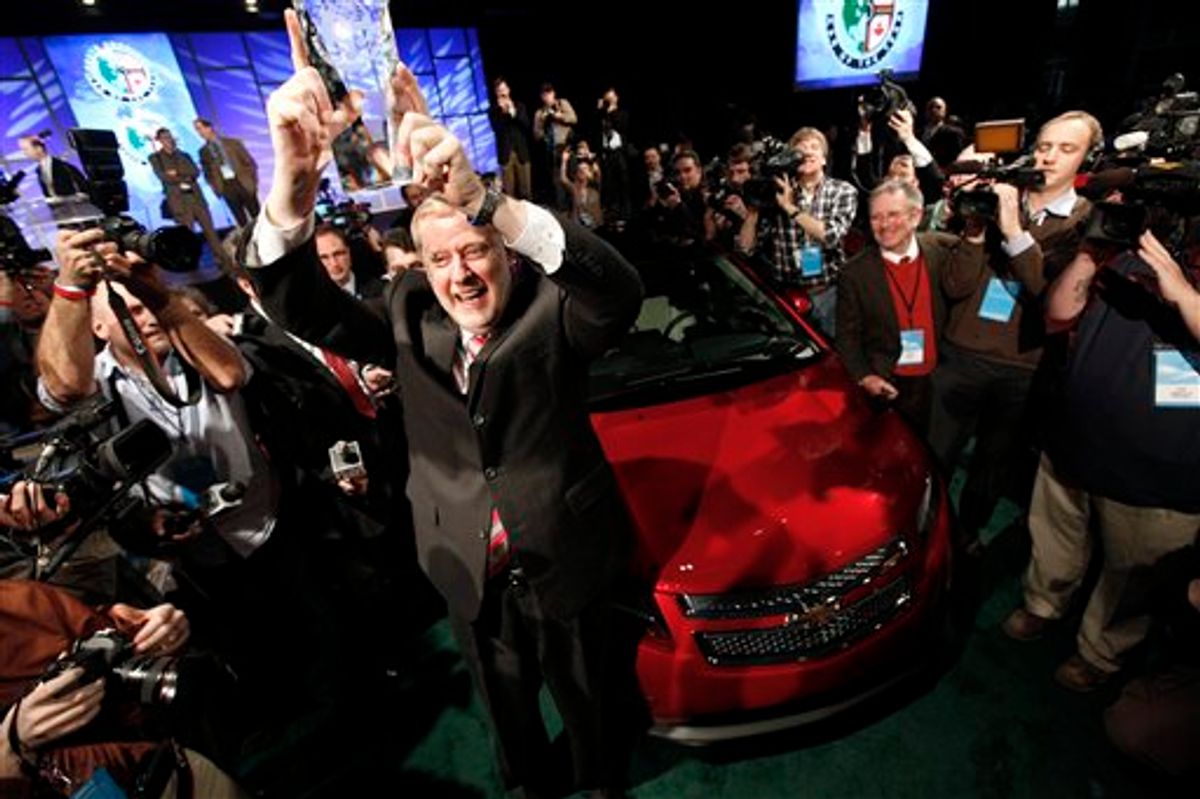 FILE - In this Jan. 10, 2011 file photo, Tom Stephens, Vice Chairman of General Motors, holds up the North American International Auto Show Car of the Year trophy awarded to the Chevrolet Volt. General Motors Co., sold more cars and trucks in China last year than it did in the U.S., for the first time in the company's 102-year history.(AP Photo/Paul Sancya, file) (AP)
--

General Motors, in another sign of its progress since a government-led bankruptcy, said Thursday it is withdrawing its application for $14.4 billion in federal loans it had sought to help build more fuel-efficient cars.

GM, which has posted three straight profitable financial quarters since its 2009 bankruptcy, said it no longer needed the loans because the company's cash position has improved. GM applied for the loans in 2009 to modernize plants to build fuel-efficient vehicles.

"This decision is based on our confidence in GM's overall progress and strong, global business performance," said Chris Liddell, GM vice chairman and chief financial officer. Liddell said withdrawing the application was "consistent with our goal to carry minimal debt on our balance sheet."

The $25 billion low-interest loan program is administered by the Energy Department. It was created by a 2007 law to help car companies retool older factories to build green cars.

Separately, GM said it would explore ways to increase production of the Chevrolet Volt rechargeable electric car. GM's vice president of global design Ed Welburn said at the Washington Auto Show that GM would also accelerate its distribution of the Volt, making it available to dealers in 50 states by the end of the year.

GM sought bankruptcy protection in 2009 and accepted nearly $50 billion in government help. The new GM had an initial public offering of stock in November.

Several automakers and auto suppliers have applied for loans from the federal energy program.

Ford Motor Co. was approved for $5.9 billion in loans to upgrade several factories to eventually produce 13 fuel-efficient vehicles. Nissan was approved for a $1.6 billion loan to retool its plant in Smyrna, Tenn., to build electric vehicles and construct a battery manufacturing plant. Tesla Motors Inc. received $465 million in loans to build electric vehicles and electric-drive powertrains in California.

Chrysler CEO Sergio Marchionne said last week the company was seeking about $3 billion in loans from the Energy Department. The automaker had hoped to receive the loans by the end of last year but the government is still trying to work out collateral with Chrysler, Marchionne said.

Marchionne said the loans would be used to develop engines, transmissions, frames and other components.