How are the waves of unrest in Tunisia, Egypt and Yemen connected?

To what degree did the Jasmine Revolution cause similar uprisings across the region? Will the outcomes be the same? 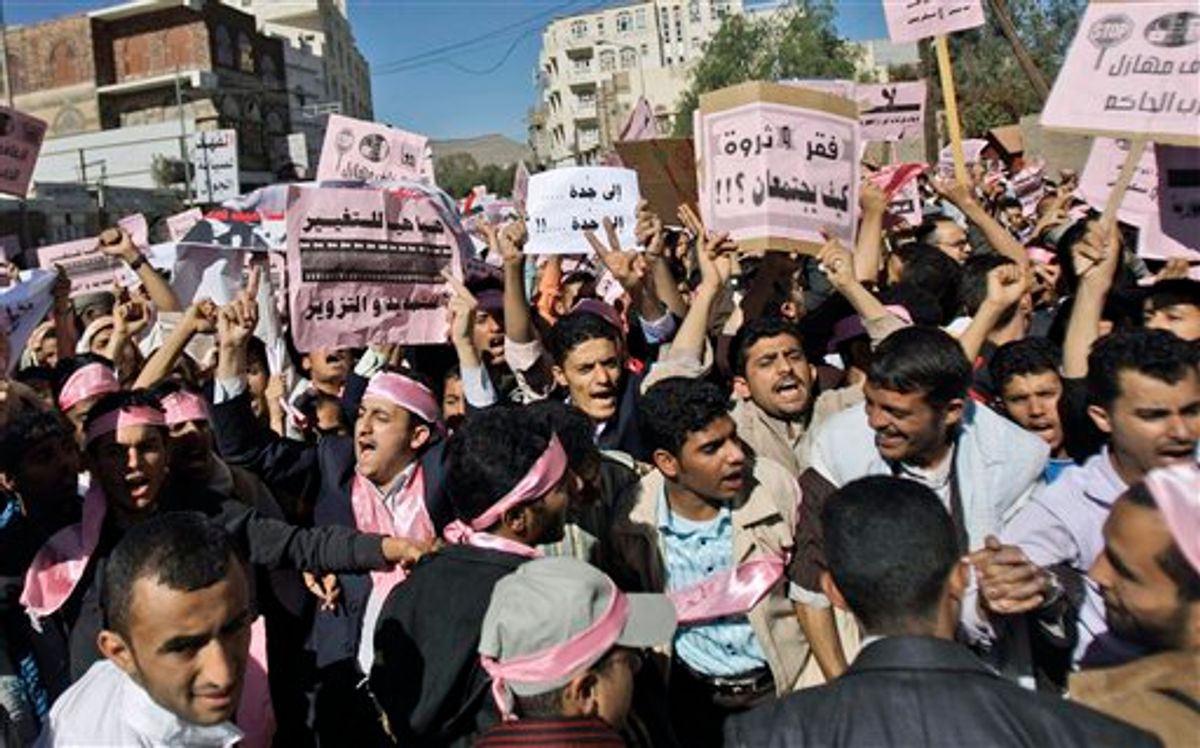 Yemeni demonstrators chant slogans during a rally calling for an end to the government of President Ali Abdullah Saleh, in Sanaa, Yemen, Thursday, Jan. 27, 2011. Tens of thousands of people are calling for the Yemeni president's ouster in protests across the capital inspired by the popular revolt in Tunisia. The demonstrations led by opposition members and youth activists are a significant expansion of the unrest sparked by the Tunisian uprising, which also inspired Egypt's largest protests in a generation. Banners read from right: 'Together lets break the ruling party'. 'Poverty and wealth how could it work?!', 'Jeddah Jeddah', and 'Yes for change no for faking and extending'. (AP Photo/Hani Mohammed) (AP)
--

After mass protests erupted in Egypt and Yemen this week, speculation mounted over whether the Jasmine Revolution in Tunisia sparked the unrest. Observers in the media are quick to point out similarities between all three uprisings. The correlation is obvious -- protesters in all three countries have cried out against poverty and demanded the abdication of their rulers. However, claiming that the chaos in Tunisia caused the calls for democracy in Egypt and Yemen may be overstating matters.

The similarities between the uprisings in Tunisia, Egypt and Yemen are compelling. There are also notable differences. So below we've compiled a list of facts that demonstrate a connection between the three uprisings, then we compare the key differences that could effect different outcomes across the region.

Self-immolation: Mohamed Bouazizi, a street vendor who set himself on fire after police confiscated his vegetable cart, provided the immediate impetus for protests in Tunisia. A number of Egyptians have actually imitated Bouazizi’s macabre show of defiance.

Esprit de corps: Egyptians marching through the streets of Cairo proudly brandished Tunisian flags, and their counterparts in Yemen are wearing pink bandannas as a show of solidarity with the people of Tunisia.

Tunisia: President Zine El Abidine Ben Ali’s regime had a long-standing reputation as corrupt and abusive. Ben Ali was reelected with a dubious 90 percent of the vote in 2009, and after a long history of governmental mistreatment Bouazizi’s self-immolation served merely as the catalyst for an uprising.

Egypt: The Mubarak regime has maintained a state of emergency in this populous country since the assassination of Anwar Sadat in 1981. Since then, governmental abuses have spurred the people of Egypt to launch widespread demonstrations a number of times, though they were each eventually quelled. The brutal murder by police last summer of Khaled Said provided the impetus for the most recent surge in anti-government sentiment.

Yemen: The Yemeni government likewise has a poor record in the area of accountability. The government most recently drew the ire of opposition with a proposed constitutional amendment that would eliminate presidential term limits, and through its refusal to postpone parliamentary elections in April. It also been ineffective in promoting economic development. Yemen is the poorest country in the Middle East.

Tunisia: According to CNN, the Tunisian military never demonstrated support for President Ben Ali, who fled the country in the wake of mass protests. Since then, two different interim governments have been established. More opposition leaders have been included in the newest administration, but the moves fall short of demands by protesters for a fresh take as several members from the Ben Ali regime remain in top posts. Violent demonstrations persist.

Egypt: While Gamal Mubarak, the president’s son and heir apparent, reportedly fled for Britain with his family, the government otherwise shows few signs of imminent collapse. Police have clamped down on demonstrations, and lingering unrest has been sporadic and scattered. Egypt is a key strategic ally for the United States, and Obama press secretary Robert Gibbs called the country a "close and important partner." A governmental collapse there could be problematic for U.S. foreign policy.

Yemen: The Yemeni government’s authority outside the capital is nominal at best. It has struggled to counter insurgencies in both northern and southern regions, while al-Qaida continues to stage attacks on Westerners, according to Reuters. However, revolution may not be in the cards just yet. President Ali Abdullah Saleh responded to today’s unrest by raising army salaries and ordering the reduction of income taxes. Yemen’s interior minister claims that police have been instructed to protect protesters. Police presence is limited and the protests are largely violence free, and the Christian Science Monitor reports that a regime ouster is unlikely:

Rather, Yemen's coalition of opposition parties seeks to tap the post-Tunisia revolution energy in Yemen to pressure the ruling party to make reforms that they had sought months before the Tunisian uprising began.

The U.S. would greatly prefer a stable Yemeni government as it struggles to keep al-Qaida neutralized in the region.