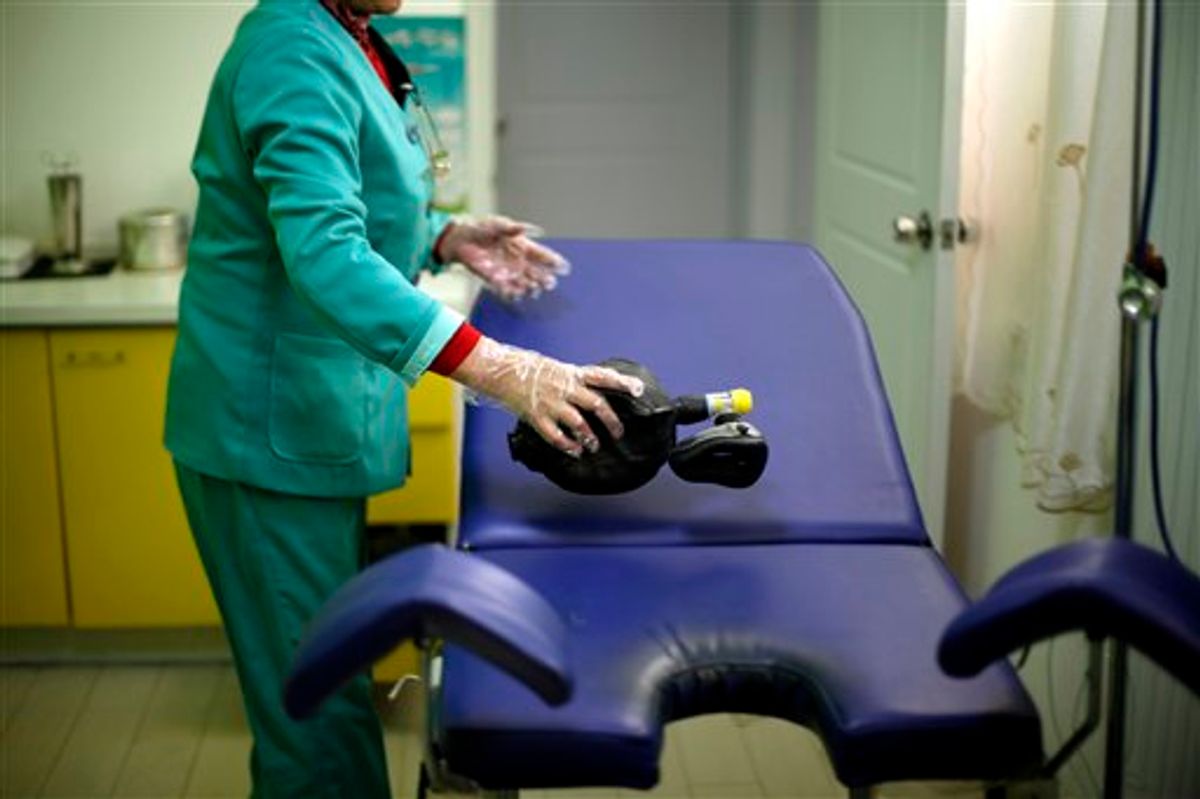 In this photo taken Monday, Dec. 13, 2010, anesthesiologist Liu Jianmin prepares for an abortion at a clinic run by Marie Stopes International in Xi'an in central China's Shaanxi province. While comprehensive data are hard to come by, official figures show abortions are increasing, and Chinese media and experts say many if not most of the abortion-seekers are young, single women. (AP Photo/Ng Han Guan) (AP)
--

Having an abortion does not increase the risk of mental health problems, but having a baby does, one of the largest studies to compare the aftermath of both decisions suggests.

The research by Danish scientists further debunks the notion that terminating a pregnancy can trigger mental illness and shows postpartum depression to be much more of a factor.

Abortion in Denmark has been legal since 1973 -- the same year the U.S. Supreme Court ruled on Roe v. Wade, which established a right to abortion.

The Danish study included 365,550 teenagers and women who had an abortion or first-time delivery between 1995 and 2007. None had a history of psychiatric problems that required hospitalization. Through various national registries, researchers were able to track mental health counseling at a hospital or outpatient facility before and after an abortion or delivery.

Researchers compared the rate of mental health treatment among women before and after a first abortion. Within the first year after an abortion, 15 per 1,000 women needed psychiatric counseling -- similar to the rate seeking help nine months before an abortion.

Researchers say women who seek abortions come from a demographic group more likely to have emotional problems to begin with. Statistics show that a large percentage struggle economically and they have above-average rates of unintended pregnancies.

While first-time mothers had a lower rate of mental problems overall, the proportion of those seeking help after giving birth was dramatically higher. About 7 per 1,000 women got mental health help within a year of giving birth compared with 4 per 1,000 women pre-delivery.

The most common problems among women in both the abortion and the delivery groups were debilitating anxiety, severe stress and depression.

"A woman should know that her risk of having a psychiatric episode is not increased" after an abortion, said Trine Munk-Olsen of Aarhus University, who led the study.

Results were published in Thursday's New England Journal of Medicine. The study was funded by grants from the Danish Medical Research Council and the Susan Thompson Buffett Foundation, which supports abortion rights organizations and projects.

The study did not examine why a pregnancy was terminated. Researchers also only studied mental problems serious enough to warrant admission to a hospital or outpatient clinic and did not look into the role of mild depression and other lesser symptoms.

In a previous study, published in 2006, Munk-Olsen found new mothers faced increased risks for a host of mental problems, not just postpartum depression.

Changes in hormone levels, sleep deprivation and other demands associated with having a baby could trigger mental problems, experts say. By contrast, women who have an abortion don't experience similar changes.

"Anyone who's ever had a baby knows it's stressful. That stress doesn't go away in a week or two" after delivery, said Dr. Robert Blum, who heads the department of population, family and reproductive health at the Johns Hopkins Bloomberg School of Public Health.

The latest findings echo an extensive review by the American Psychological Association in 2008 that found no evidence that ending an unwanted pregnancy threatens women's mental health.

A separate review by Blum and his colleagues found that the most rigorous research on the topic did not find a relationship between abortion and long-term mental health problems. Previous studies that suggested such a connection were often poorly designed, had dropout rates or did not control for factors that could affect the conclusion.

Though the latest study was done in Denmark, Blum said it's comparable to the U.S. Access to abortion is similar in both countries though Denmark tends to be more conservative.

Abortion rates are lower in Denmark -- about 13 abortions per 1,000 women in 2008, compared to almost 20 per 1,000 U.S. women that same year, according to the Guttmacher Institute, which studies reproductive-rights issues.