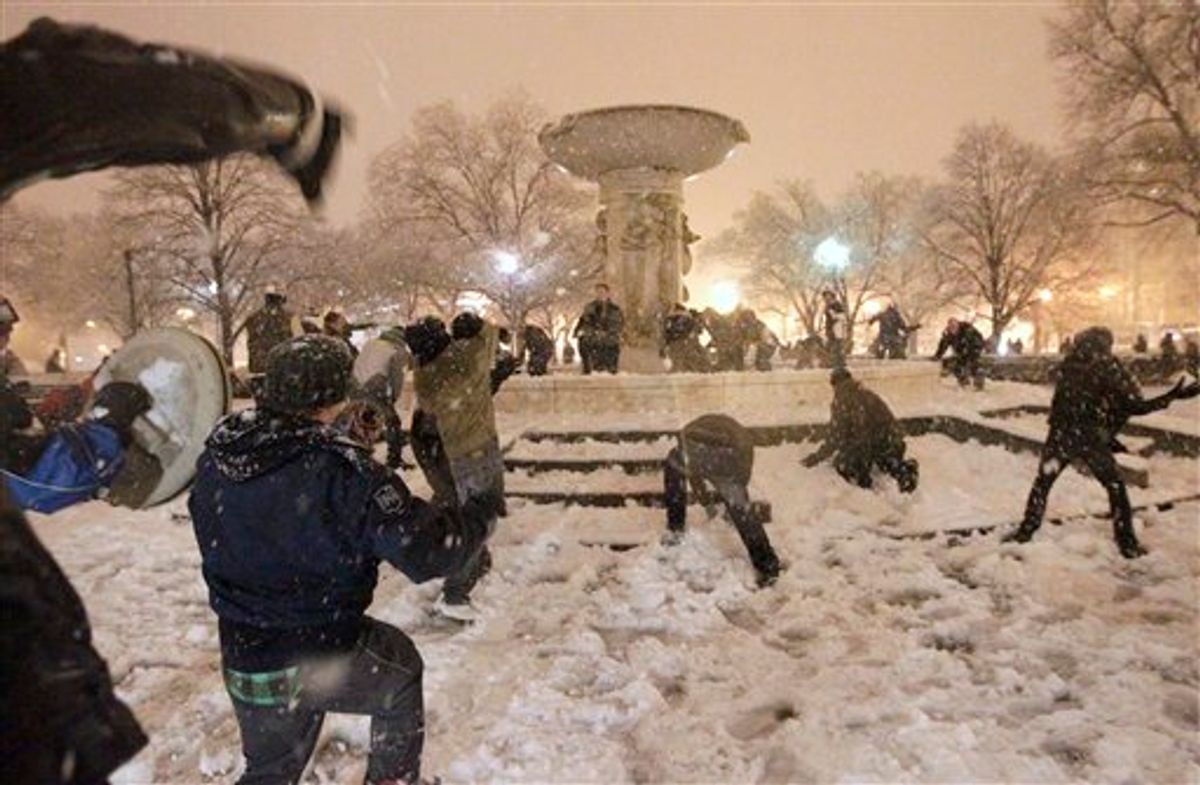 A snowball fight breaks out at Dupont Circle in Washington in the still-falling snow, Wednesday, Jan. 26, 2011. (AP Photo/Pablo Monsivais) (AP)
--

Commuters up and down the East Coast began the all-too-familiar task of digging out cars, shoveling sidewalks and slogging and slipping through a treacherous morning commute on Thursday after a drawn-out storm dumped more than a foot of snow in some areas overnight, heaping more misery on a region that has been hit by one snowstorm after another.

The storm started Wednesday with icy mix but overnight gave a wallop of heavy blowing snow in many places, stranding thousands of airplane passengers and leaving more than 400,000 customers in and around the nation's capital without power.

Public schools remained closed for a second day Thursday and motorists were warned of dangerous road conditions. In New York City, even the Statue of Liberty was closed for snow removal. New York's Long Island Rail Road, a commuter rail line that is nation's largest, was operating on a reduced schedule.

"It's hard because you've got mixed water, ice and snow right now," said Miguel Williams, shoveling snow on Manhattan's 10th Avenue for a company that contracts with businesses to clear the sidewalks. It's so hard, he said, that snowblowers are breaking down under the weight of the wet, heavy snow.

In a region already contending with above-average snowfall this season, the storm that began Wednesday added several more inches. In New York's Central Park, 15.3 inches had fallen as of 1 a.m. Thursday, and 19 inches had fallen in parts of New Jersey, the National Weather Service reported. Forecasts called for up to 12 inches in the Boston area, up to 8 inches in the Hartford, Conn., area and perhaps 14 inches in areas of Rhode Island before the storm moved on later in the morning. In the Philadelphia area, as much as 17 inches fell by the time the storm moved out Thursday morning.

In Portsmouth, N.H., workers were nearly out of room to stash their plowed snow.

"We probably have a five-story snow dump right now," said Portsmouth public works director David Allen. "It's time to get a lift up on it and we could probably do a ski run."

Officials in Massachusetts say two men are trapped inside a car after a garage roof collapsed.

In Massachusetts, high winds also made travel trickier. Gusts of 46 mph were reported in Hyannis, 45 mph in Rockport and 49 mph on Nantucket early Thursday. In Lynn, Mass., a roof collapsed at dairy during the storm Thursday morning. It was unclear if anyone was inside, and official weren't immediately sure it was weather related.

As the storm approached Wednesday, schools were closed, governments sent workers home early, and commutes were snarled. Cars and buses slipped and slid on highways. Pedestrians struggled across icy patches that were on their way to becoming deep drifts.

The New York area's three major airports, among the nation's busiest, saw more than 1,000 flights canceled. About 1,500 people were stuck overnight at Philadelphia International Airport, where more than 400 flights were canceled Wednesday night.

Rain drenched the nation's capital for most of the day and changed to sleet before it started snowing in earnest at mid-afternoon. The snow and icy roads created hazardous conditions for President Barack Obama as he returned to the White House after a post-State of the Union trip to Manitowoc, Wis.

Officials urged residents in Washington and Maryland to stay off the roads as snow, thunder and lightning pounded the Mid-Atlantic region. In D.C., Metro transit officials pulled buses off the roads as conditions deteriorated. Firefighters warned the heavy snow was bringing down power lines and causing outages.

In Pennsylvania, residents hunkered down as a one-two punch of the winter storm brought snow, sleet, and then more snow. More than a foot fell in Philadelphia overnight.

Since Dec. 14, snow has fallen eight times on the New York region -- or an average of about once every five days. That includes the blizzard that dropped 20 inches on New York City and paralyzed travel after Christmas. When the snows arrived Wednesday, the city had already seen 36 inches of snow this season in comparison with the full-winter average of 21 inches.

The city declared a weather emergency for the second time since the Dec. 26 storm, which trapped hundreds of buses and ambulances and caused a political crisis for the mayor. An emergency declaration means any car blocking roads or impeding snowplows can be towed at the owner's expense.

In suburban Silver Spring, Md., nurse Tiffany Horairy said as she waited for a bus that she was getting tired of the constant pecking of minor or moderate storms.

"I'd rather get something like last year, with all the snow at once," she said.

Through Tuesday, Boston had received 50.4 inches of snow, a nearly 270 percent increase over normal snowfalls of 18.8 inches at the same time in the season. The central Massachusetts city of Worcester had gotten 49.3 inches while the norm is 28.7 inches. Providence, R.I., had recorded 31.7 inches for the season, twice the norm of 15.7 inches. Bradley International Airport in Connecticut had gotten 59.1 inches of snow, more than double the normal 22.8 inches, the National Weather Service has said.