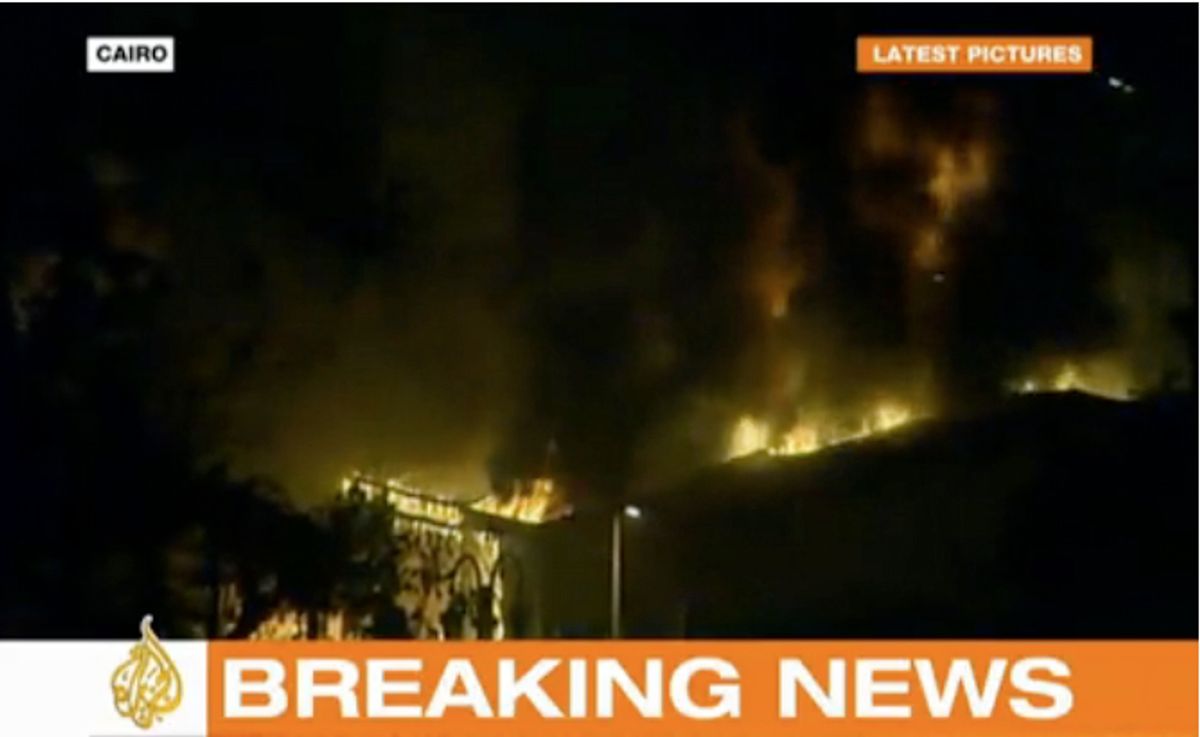 There is a curfew in effect in Egypt, but thousands of protesters remain in the streets in Cairo, Suez, Alexandria and across the rest of the country. President Hosni Mubarak is expected to speak soon. Police might've fired tear gas at praying demonstrators. And Fox reported on how ICE arrested some immigrant sex offenders in Virginia.

Fox, CNN and MSNBC are all acquitting themselves better than they did the day Tunisia's government collapsed. All of them have reporters in Cairo, and are airing footage of the demonstrations on the streets. But none of them are reporting on the situation as compellingly as Al Jazeera English, which has reporters across the country. And if you're in the United States, you can probably only see Al Jazeera English online. If you're watching Al Jazeera, you're seeing uninterrupted live video of the demonstrations, along with reporting from people actually on the scene, and not "analysis" from people in a studio. The cops were threatening to knock down the door of one of its reporters minutes ago. Fox has moved on to anchor babies. CNN reports that the ruling party building is on fire, but Al Jazeera is showing the fire live.

CNN, to its credit, is using coverage from the grown-ups at CNN International. MSNBC had Dan Senor (council on foreign relations) reporting from Davos. Yes, liberal MSNBC was getting live analysis from a neoconservative former spokesperson for the occupying U.S. government in Iraq. Fox just had former U.N. Ambassador and ultra-hawk John Bolton on to warn us about the Muslim Brotherhood. Al Jazeera had an opposition party leader on the phone. All three of the major U.S. cable news networks are prefacing breaking news on their chyrons with the words "Al-Jazeera reports." Al Jazeera was criticized for being reluctant to cover the Egyptian protests as zealously as it covered Tunisia -- and I can't speak to that, because I obviously can't watch the Arab-language version of the channel -- but its English-language network is, today, mandatory viewing for anyone interested in the world-changing events currently happening in Egypt. The American networks barely qualify as an interesting supplement. A bit earlier, Al Jazeera reported on what could be live ammunition fired by police outside the heavily guarded radio and television building. And Fox went live to Chicago, where two men tried to rob a Brink's truck.