What "cage-free," "fertile" and other egg labels mean

"Fertile" is kind of goofy, "vegetarian-fed" is kind of weird, but "cage-free" is serious (and big) business 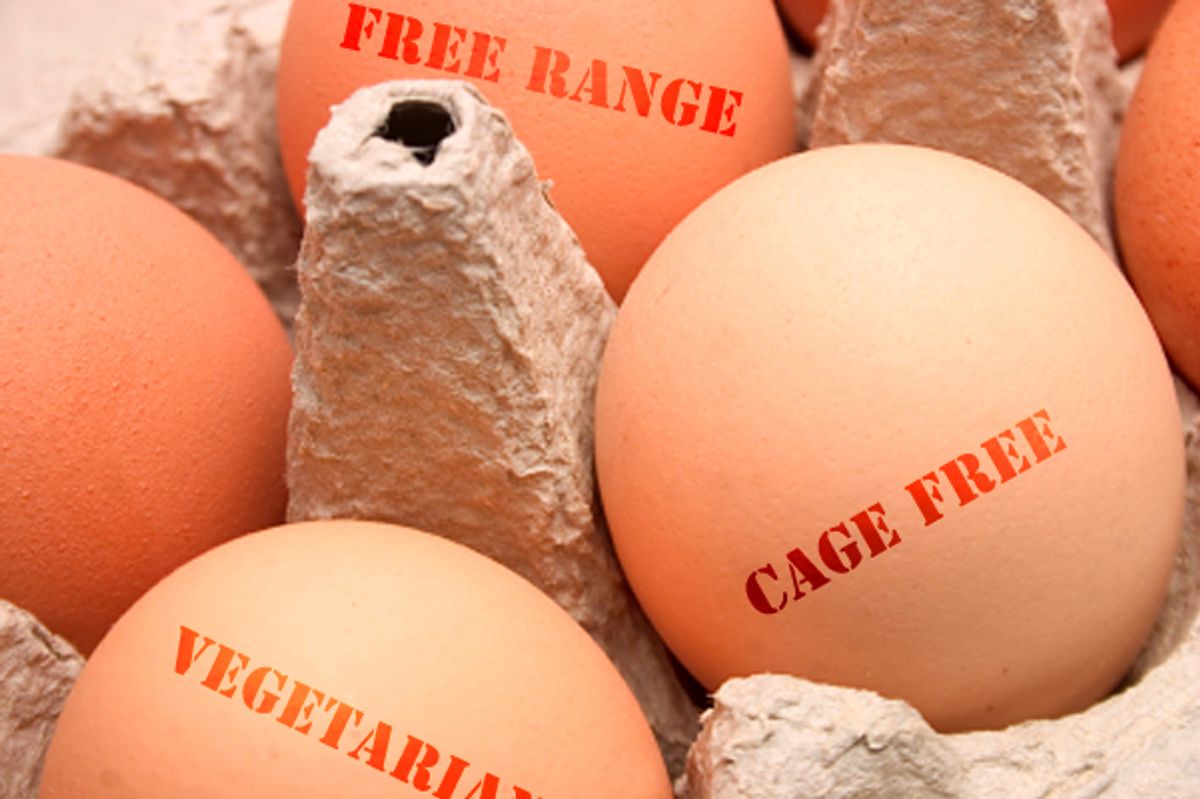 I know there's a lot of moral compromise and cognitive dissonance in my food choices. I know I'm ignorant of ugly truths about where a lot of my food comes from, and I know there are some I'm actively ignoring. Should my self-challenge to not eat cheap, mass-produced chicken carry over into cheap eggs? I've kind of avoided cheap eggs in the spirit of avoiding cheap chicken, passing up numerous beloved egg salads, the world's most perfect mayonnaise delivery vehicle. But I have not once turned down a chocolate chip cookie, ice cream or, well, mayonnaise on any other kind of sandwich. The Incredible Edible Egg is in everything, because it is kitchen magic. I once thought, with some seriousness, that I was ready to devote the rest of my life to cooking omelets.

But last week, as I looked into the definitions of marketing labels like "free-range" for chicken, I kept running into information on egg labels and what they mean as well. Some of these seem kind of goofy -- I mean, how important is it to you that your eggs come from a hen who's had a chance to flirt with a rooster? -- but some speak to some seriously unpretty things that go on. Here are some common marketing labels for eggs and what they mean:

Cage-free: The vast majority of industrial eggs are laid by hens in cramped cages, stuffed wing-to-wing so tight they can't walk, spread their wings, or do other chickeny things like lay their eggs in nests. It's foul enough a practice (that was NOT A PUN) that a Nobel-winning zoologist, Konrad Lorenz, lamented its use as "the worst torture." (The fact that Lorenz was a card-carrying member of the Nazi party in his younger years isn't too thrilling, but still.) Anyway, the Humane Society of the United States, whom I don't agree with on every issue, has focused one of its major campaigns on the promotion of cage-free egg production. Which, frankly, seems smart: it's a step toward a good place, but it's also achievable enough that massive fast food chains like Subway and Burger King can pretty readily commit to a switch without breaking too much of a sweat. No one's a hero, but at this scale, the hundreds of millions of hens' lives can be significantly improved at any given moment.

Anyway, the label means that the eggs are laid by hens who are not in cages and have freedom to walk, perch, lay their eggs in nests, etc. Still, they're packed tightly in henhouses, and don't necessarily have any access to the outside.

Free-range: As with meat chickens, the term "free-range" does have a technical U.S. Department of Agriculture definition, but it's so vague as to invite cynical meaninglessness: "Producers must demonstrate to the Agency that the poultry has been allowed access to the outside." Some producers take this very seriously, actually letting the birds out, but many large producers, who market the vast majority of eggs, interpret this to mean that you just have to have a tiny open window somewhere in the henhouse that faces a parking lot. Both would technically qualify, so that's not encouraging. One thing that can be said, though, is that any egg labeled "free-range" would typically be at least cage-free, even if the "ranging" part of it is suspect.

Free-roaming: Pretty much the same as "free-range," though this label is even weaker, since there is no technical USDA definition for free-roaming eggs. (Help! The eggs are walking around on their own!)

Fertile: I have to confess that I don't really know why you'd want fertile eggs in your market. I mean, are you going to sit on them for a while and hope for some cute little chicks? "Should we brunch or gestate?" isn't a question that's ever been asked in my home, but hey, whatever floats your boat. Anyway, the label means that, poetically, the hens "have access" to a rooster. Make of that what you will, but the Humane Society suggests that "most likely" they are also cage-free.

Natural: Just as with meat chicken, this term really just means that nothing has been added to the egg after harvest, and has nothing to do with how the hen was raised or fed.

Organic: To be certified organic, the eggs must come from chickens that are cage-free and "free-range," fed only vegetarian, certified-organic feed. Mark Kastel of the Cornucopia Institute, whom I spoke with for the meat chicken label story, noted that this is particularly poignant for eggs, because conventional producers often use an arsenic-laced feed to increase production. He also said that, because organic rules forbid antibiotics, they also force producers to keep a healthier, cleaner environment to maintain their flock's health.

In a real way, "organic" might be the most important label, because there is actually an enforcement apparatus at the USDA for it; many of these other labels are governed more by fear of false advertising suits than actual inspectors.

Vegetarian-fed: The definition for this comes from a reader, Jollysapper, who commented that, "'Vegetarian fed' means just that. The food that I (the farmer) buys and feeds to the birds contains no animal byproducts. So the chickens can forage for worms and beetles and mice (I've seen the chickens swallow an occasional field mouse). But I won't feed my chickens dead chickens, cows, ducks, whatever." Note, though, that Jollysapper is referring to pasturing chickens, which is how they get to forage for worms and seed. But the label "vegetarian-fed" in itself doesn't have any bearing on how much freedom the birds are given. They might well be caged. Which brings us to...

Pastured: In theory, "pastured" refers to eggs produced the way you imagine they should be -- the birds are allowed to roam on a pasture, foraging for seeds and insects, and come home to a sheltered house at night. Their foraged diet, among other things, makes for egg yolks that are bright orange, and far tastier. Again, though, this is another label that has no legal binding power. They may or may not be organic (or they may not be certified organic, but still be produced in a way that "organic" or beyond, since certification itself is prohibitively expensive for many small farmers). Usually they are produced by small farmers, and, as Mark Kastel suggests, meet an egg farmer at a market and ask if you can come visit their chickens. If they're proud of how they raise them, they'll probably say yes.

Omega-3 enriched: This label also refers only to the hens' feed, not how they are otherwise treated. To enrich their eggs with Omega-3 fatty acids, the birds' food includes kelp, rapeseed, flax or linseed, or sometimes cod liver oil.

Humane certified: I realize that pictures of cute-things-all-beat-up is a favorite tool of propagandists of all sorts, but I'm sorry, you really can't unwatch a chicken getting de-beaked. Hundreds of millions of chicks -- and not that this should matter in the moral universe, but I'm talking about Peeps-cute chicks -- have their beaks cut or singed off so that when they grow into egg-laying hens, they can't peck each other to death. It's true that in even the most Old MacDonald kind of farm, chickens sometimes peck at each other to establish dominance, sometimes with serious violence. (The phrase "henpecked" actually comes from somewhere.) But it happens so often and with such cannibalistic fury in tightly packed industrial egg-laying henhouses that a bloodless someone started this practice.

Now, rationally, there are lots of things you could say -- isn't it better, on balance, to trade a moment of a chick's pain for a pecked-to-death future? Don't humans cut our own babies' private parts?

Some of these labels are Certified Humane; American Humane Certified, which is not the same thing, but is managed by the American Humane Society, which is also not the same thing as the Humane Society of the United States; Animal Welfare Approved (which does not permit de-beaking); Global Animal Approved (also does not permit de-beaking); and the very sketchy United Egg Producers Certified, which represents massive industrial egg producers and it's not clear to me what they certify, except, perhaps, that the eggs in the carton were in fact produced. For a great rundown (chart included) on these different certifications and what they mean, check out Michelle Harvey's piece in Grist.

So which eggs are best to buy? Well, you'll have to make your own choices between price, health, humane treatment and which brands and labels you trust. Sorry. Here is a great guide by the Cornucopia Institute on organic egg brands and how well they meet the spirit and letter of the law. And for me, I don't know. I don't know that I'll give up someone else's chocolate chip cookies. But for my home, I'll check the Cornucopia guide, and in market season, I'm getting my eggs from hens raised in pasture, from farmers I can at least talk to.