Who's doing Mubarak's bidding in Washington?

The Egyptian regime pays big money to lobbyists with big names -- like Podesta, Livingston -- from both parties 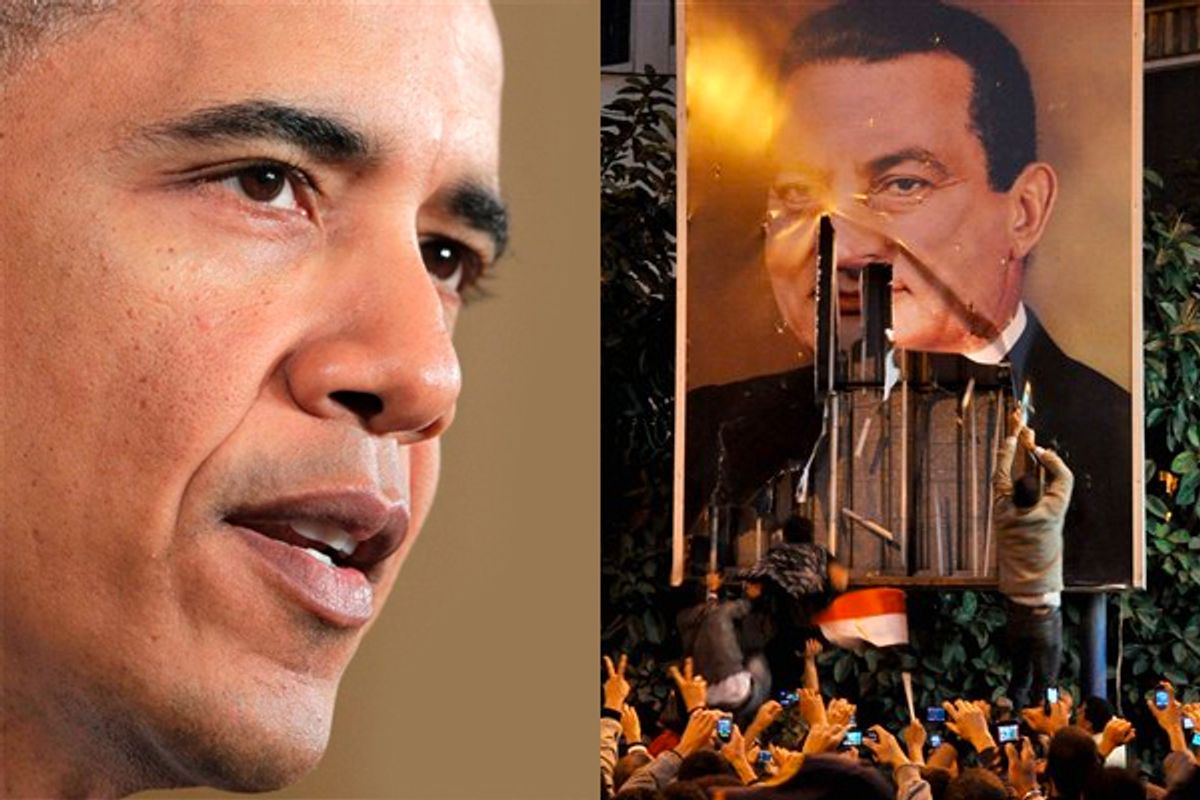 As protests rage on in Egypt, the close relationship between the U.S. government and the regime of Hosni Mubarak has already garnered a lot of attention. But it's also worth taking a moment to examine the lobbying muscle that Egypt employs to secure its interests in Washington, including a mammoth $1.3 billion annual military aid package.

Seven firms are currently registered foreign agents for Egypt, including one, the Podesta Group, that has close ties to the Democratic Party and the Obama administration.

Founded by brothers Tony and John Podesta in the late 1980s, the Podesta Group has been retained by some of the biggest corporations in the country, including Wal-Mart, BP and Lockheed Martin. Tony Podesta's bio boasts that "if you want something done in Washington, DC, you go to Tony Podesta." After starting the firm, John Podesta went on to serve as Bill Clinton's chief of staff and, more recently, to found the Center for American Progress, a liberal think tank closely associated with the Obama administration.

The Podesta Group counsels Egypt "on U.S. policies of concern, activities in Congress and the Executive branch, and developments on the U.S. political scene generally," according to forms filed with the Justice Department in 2009.

Records also show Tony Podesta himself meeting with members of Congress, governors and generals in recent years to discuss U.S.-Egypt relations and the military aid package and to introduce Egyptian officials to American power brokers.

For this work, the Podesta Group has profited handsomely. The Egyptian government in 2007 signed a deal to pay $1.1 million annually, plus expenses, to the PLM Group, which was a joint venture of the Podesta Group and the Republican firm the Livingston Group. (That's the lobbying shop of former Louisiana congressman Bob Livingston, who, on the eve of becoming speaker in the late 1990s, resigned from the House following revelations of extramarital affairs.)

PLM Group agreed to lobby Congress "to facilitate approval of commercial and non-subsidized government-to-government arm sales, and to improve the terms of the aid package." PLM would also "provide general, high-level strategic advice relative to the Egyptian image among American decision-makers."

ProPublica last year reported on work done in 2008 by lobbyists for Egypt to strengthen the military relationship with the U.S. governments and top defense contractors who sell arms to the Mubarak regime:

Lobbyists for Egypt had at least 279 contacts on military issues, the bulk of which occurred when PLM Group accompanied delegations of Egyptian military officers to meet members of Congress, administration officials and representatives from defense contractors — including BAE Systems, General Dynamics, General Electric, Raytheon and Lockheed Martin. All five have done business with the Egyptian government, selling tanks, fighter jets, howitzers and radar arrays to its military.

PLM Group, by the way, is co-chaired by yet another congressman-turned-lobbyist, Toby Moffett, a Democrat from Connecticut.

But Egypt's representation in Washington is not limited to PLM Group.

Egypt retains public relations giant Hill and Knowlton to promote its communications technology industry (for "the standard hourly rate," which is not specified in disclosure forms).

The Mubarak regime also signed a contract in 2009 to pay $45,000 per month plus expenses for public relations work to the D.C.-based firm Chlopak, Leonard, Schechter and Associates.

That firm also has deep ties to both major political parties. Robert Chlopak is the former executive director of the Democratic Senatorial Campaign Committee. Charles Leonard was a top advisor to George H.W. Bush's 1988 presidential campaign and also national campaign director of the National Republican Congressional Committee. And Peter Schechter is a former Hill staffer.

It will be interesting to see how long these lobbyists keep their Egyptian client if the protests and the crackdown intensify. We've seen lobbyists drop clients over political pressure in the past.