Why are so many films for Latinos bad?

"From Prada to Nada" is the latest entry into a film genre filled with cheesy, awful flicks. Will it ever change? 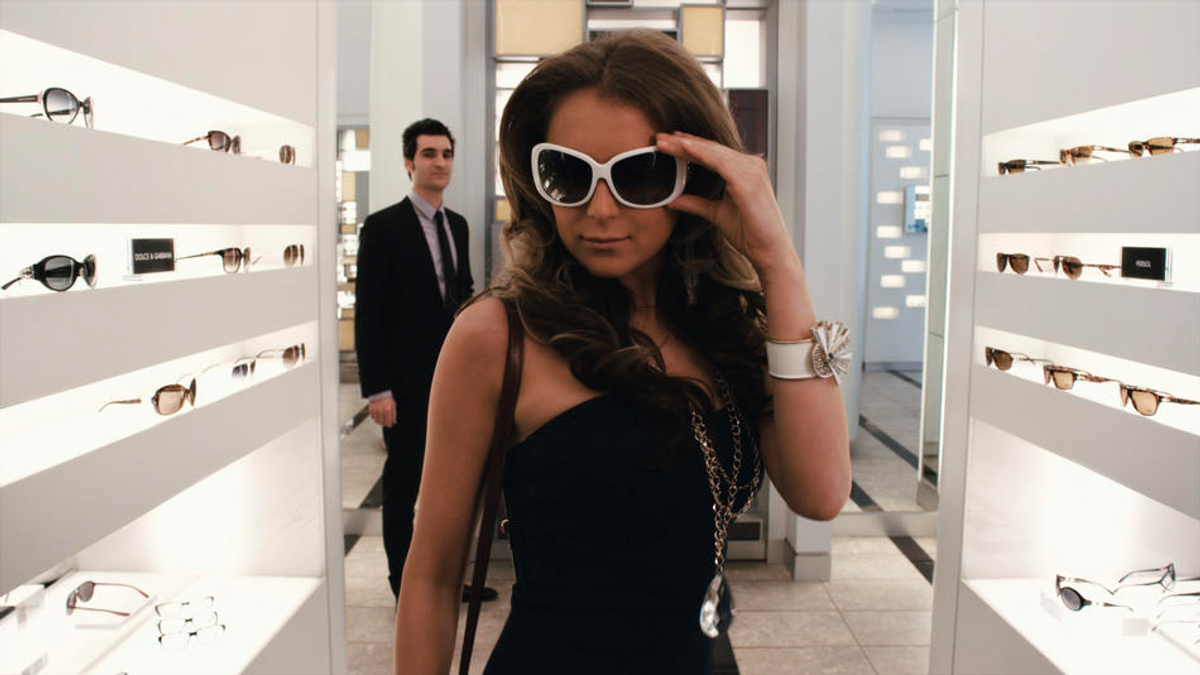 While it’s ostensibly based on Jane Austen’s "Sense and Sensibility," the new movie "From Prada to Nada" sells itself as a traditional Hollywood riches-to-rags comedy -- overdressed brat gets taken down a peg, falls in love with a hunky prole, and learns that love is more important than shoes. But this is a movie aimed squarely at Latino audiences, so the trailer throws in lots of the usual window dressing: Lowriders! Scary chola girls who look like they wandered in from "Mi Vida Loca"! Tequila shots! Mantillas!

Statistics keep telling us that Latinos are coming into their own in the United States, growing as both an economic force and a cultural one. Spanish-speaking countries are giving Hollywood bankable and critically acclaimed actors like Javier Bardem, Salma Hayek, Gael García Bernal, and Penélope Cruz. So why is Hollywood returning the favor by making such dreadful movies for Latino audiences?

One of the more painful moviegoing experiences of recent years would have to be "Our Family Wedding," about a Mexican-American woman (America Ferrera) and the African-American man (Lance Gross) she plans to marry. Not only do the characters in this movie act like a nuptial union of black and brown is the most shocking event of 2010, but the movie scrapes bottom in the laughs department, relying on food fights, a Viagra-addled goat, and Carlos Mencia as sources of comedy.

Or take the case of the rom-com "Chasing Papi," another clunker from Steven Antin, who co-wrote this dud several stops on the road to perdition before "Burlesque." The film’s Rotten Tomatoes page comes loaded with raves like "Chiquita Banana and the Frito Bandito were subtle compared to the caricatures of Latino culture in this movie."

As a gay film critic, it’s an issue with which I’m rather familiar. I periodically get interviewed for pieces asking questions like "Why are queer films so bad?" or "Why are queer films getting better?" The answer to both questions is a simple one: Somebody -- either Plato or Ben Franklin -- once observed that "85 percent of everything is crap." It’s all a matter, then, of expanding the playing field; in other words, the more gay movies that get made, the more likely we are to get ones that don’t suck. And that’s a formula that applies itself to all niche films: For every 10 or so Tyler Perry melodramas, African-Americans get a sophisticated romantic comedy like "Something New" or a thoughtful drama like "Night Catches Us." After enough terrible Nora Ephron or Penny Marshall movies, Kathryn Bigelow gets to make "The Hurt Locker." It’s a numbers game.

And until now, the effort to reach latin audiences has been feeble. According to USA Today film critic Claudia Puig, "It’s different and much less robust than the effort to reach African-American audiences. Where is the Mexican-American Tyler Perry? Or the Cuban-American Tyler Perry or the Puerto Rican Tyler Perry?" Putting aside the occasional Latino-themed art-house hit that found an audience -- "Real Women Have Curves," "Y Tú Mamá También," "Maria Full of Grace" -- and the wonderfully loony oeuvre of Robert Rodriguez, much of what gets aimed at Latino moviegoers feels lazy and stereotypical.

Sometimes it’s a matter of the Latin flavor feeling tacked on, like a discount piñata bought at the last minute, as in the case of "Tortilla Soup," a rather by-the-numbers, Mexican-American reworking of Ang Lee’s "Eat Drink Man Woman." And while the Christmas movie "Nothing Like the Holidays," set in the Puerto Rican Humboldt Park neighborhood of Chicago, gets the ethnic details right, it’s saddled with one of those plots where everything could be settled by one five-minute conversation that none of the characters are having.

There are a series of tropes you can find in most Latino movies, even in many of the good ones -- close-minded and tradition-bound fathers, dialogue about how we people from [insert specific Spanish-speaking country here] like to talk loud and get in each other’s business, a boisterous dancing-in-a-nightclub scene, and at least one rebellious child who wants to either go to college, marry outside of la raza, or come out of the closet.

Not that you can blame these filmmakers for aiming at the lowest common denominator; after all, that’s how most power brokers in Hollywood made their fortune. And when discussing niche audiences, it’s easy for white commentators to moan about the fact that, say, African-American filmgoers shunned Sundance hits like "Love and Basketball" in favor of something dopey like Ice Cube’s "Are We There Yet?"

Just one problem with that complaint, says Latina magazine associate entertainment editor Lee Hernandez: "If you take something like [African-American director Theodore Witcher’s 1997 Sundance hit] ‘Love Jones,’ which did well on the festival circuit, there are equivalencies for that in terms of whiter movies that do well at film festivals but didn’t make a boatload of money. That’s not a minority thing." In other words, don’t blame black and Latino audiences for not turning out to see arthouse movies aimed at them unless you also blame white audiences for not making "Synecdoche, New York" a hit. "We watch movies and TV shows all the time to look for Latinos that are in them, but even if they make a movie that’s, say, set in Central Los Angeles, and a bunch of Latinos are in it, and the movie sucks? It’s not going to do well. I think the quality of the product is the most important thing."

Gay and lesbian moviegoers have gone through a similar hunger to see themselves portrayed on film, even in movies that were insulting or badly made. I still remember dutifully trooping out to see any remotely queer movie until that magic moment in 1995, when I walked out of a dreadful comedy called "Lie Down With Dogs" midway through. By that point in history, there were enough gay movies getting made that I could choose to see just the ones that weren’t "Clockwork Orange"–style eyeball torture. A few disappointments here and there would seem more par for the course if audiences got a steady stream of Latino-themed movies. But when there’s just one or two a year, it’s harder for those films to avoid the 85-percent-of-everything rule.

But "From Prada to Nada" is a sign that those numbers are about to get better. It's the debut feature of Pantelion Films, a new venture announced last year by the powerhouses Lionsgate Films (home of Perry and, perhaps more important, Madea) and Mexican media giant Televisa. "From Prada to Nada," opens in limited release (250 screens) today, and represents the opening salvo of Pantelion’s ambitious efforts -- with a proposed production and release slate of eight to ten films per year -- to aggressively target the Latino audience with mainstream movies. According to AMC Theatres, Latino audiences currently represent about one quarter of ticket-buyers, and current population figures projecting that by 2050 the Hispanic population will grow to 24 percent (from 14 percent today).

That said, it doesn't mean Latino movies are necessarily going to more critical accolades. The company’s business plan focuses specifically on making mainstream movies for mainstream audiences that happen to be Latino. "We’ve done a bunch of focus groups," says Pantelion CEO Paul Presburger, and those surveys of Latino viewers tell him that they "don’t want to be hit over the head with the Latino issues of the day -- border wars and things that are happening with drugs and violence, or problems with gangs. They’re going to Hollywood movies. They want to be entertained."

Jim McNamara, the chairman of Pantelion and former CEO of Telemundo adds, "With ‘From Prada to Nada,’ we want to do a broad comedy that just happens to be set in the Latino world. And most of these [previous Latino] movies, since they are made independently, they are works of art, labors of love by auteurs. And very often what happens is that they are not conceived of as commercial titles but as works of art. Because the struggle to get a movie made is so hard that the only thing that keeps them going is that passion and personal story. And so what we are trying to do is turn it around and say, ‘Wait a minute, the main purpose here is not to tell an intense personal story.’ There’s nothing wrong with that, but what we are really trying to do is to entertain the broadest number of people."

It’s not like Latinos aren’t making slow progress in the entertainment industry. Hernandez notes that the recent Oscar wins of Spanish actors Penélope Cruz and Javier Bardem represent a breakthrough, but they’re still the exception and not the rule. And the success of the aforementioned Latino actors in Hollywood doesn’t always give a boost to niche cinema. When the ethnicity of Gael García Bernal’s character in "Letters to Juliet" is never discussed -- and when Cameron Diaz can be one of the biggest Latina stars in the world without ever playing a Latina role -- that's a giant step for assimilation, but not even a small step toward a vibrant American cinema that's aimed at Latino audiences.

But still, it's better than nada.

Alonso Duralde is a freelance writer and film critic in Los Angeles.