How to use birther hysteria to balance a budget 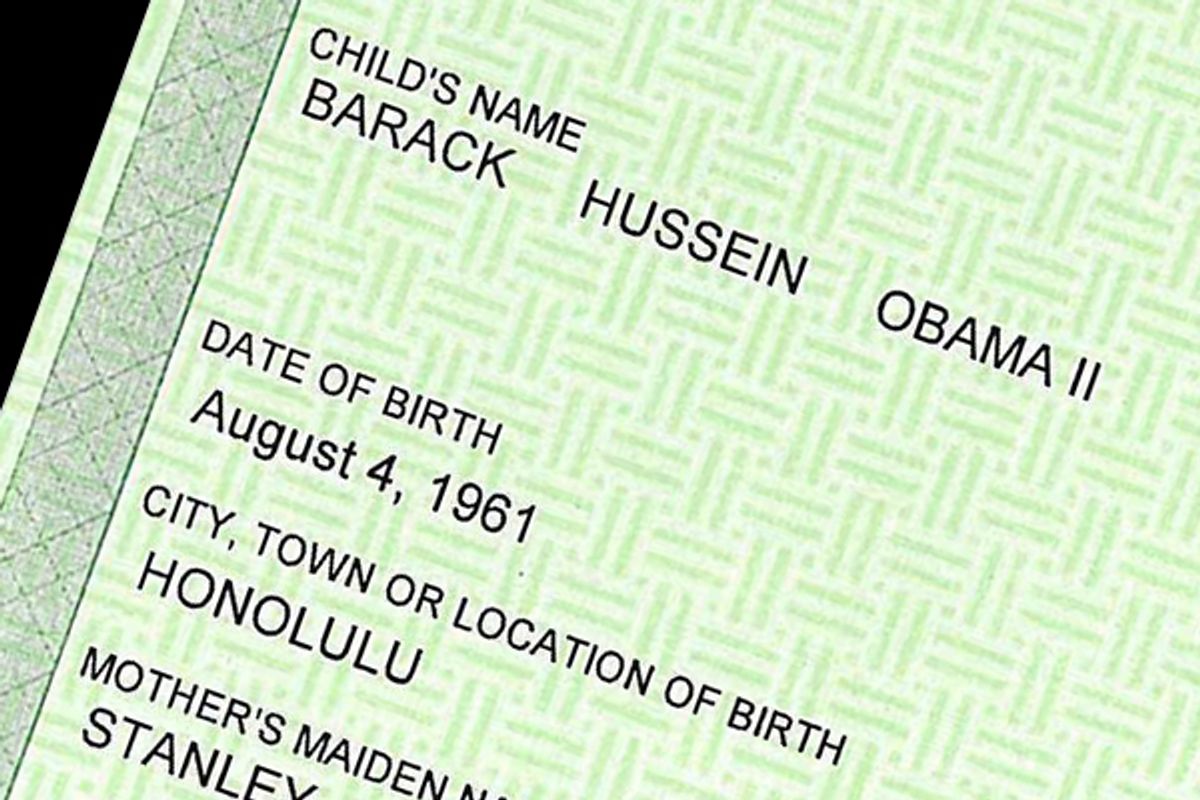 Even as two different House panels plan to hold hearings on how to solve the disastrous fiscal problems faced by states, Hawaii is forging ahead with its own bold initiative to close a big budget gap: Five Democrats have introduced a bill that would allow anyone to buy a copy of President Barack Obama's birth certificate for $100. (Hat tip, Marginal Revolution.)

The idea behind the measure is to end skepticism over Obama's birthplace while raising a little money for a government with a projected budget deficit exceeding $800 million over the next two years.

"If it passes, it will calm the birthers down," said the bill's primary sponsor, Rep. Rida Cabanilla. "All these people are still doubting it because they don't want the birth certificate from Obama. They want it from our state office."

The bill introduced this week would change a privacy law barring the release of birth records unless the requester is someone with a tangible interest, such as a close family member.

How the World Works fully supports efforts to monetize birther hysteria -- or any other completely ludicrous conspiracy theory. Tough times call for innovative revenue streams. Since there would probably be constitutional issues raised by the direct imposition of a tax targeted at birthers, charging for Obama birth certificates seems like a smart workaround -- provided Hawaii's privacy restrictions can be waived, which doesn't seem all that likely.

However, there are some other problems. The birthers are undoubtedly going to demand access to the "long form birth certificate" that they are certain doesn't exist. But if it does exist, will significant numbers of people pay good money to have the cornerstone of their deranged worldview knocked out from under them? This is psychologically treacherous territory, and I think Hawaii's legislators may have unrealistic expectations as to the demand that exists for this kind of self-negation. Orly Taitz, queen of the birthers, would likely disappear in a puff of smoke after laying down her cash. She may have second thoughts.

Also disappointing -- Hawaii may have missed its moment. The Associated Press reports that in recent months, state employees have been fielding far fewer calls from birthers demanding evidence that the president is a citizen. More fallout from the midterms?

And finally, there is a distinct chance that many birthers will not realize that the purpose of this gambit is to solidify Obama's citizenship claim. I took a quick look at Orly Taitz's website -- the "World's Leading Obama Eligibility Challenge Web Site" -- to see if there was any discussion of this news, and discovered the following post halfway down the front page:

You tell me, what is going on here. A local Hawaiian newspaper (with an AP by-line) is reporting that state legislators, DEMOCRATS, want a bill that will allow anyone, paying a fee of course, to get access to Obama/Soetoro's birth certificate, if such a thing exists. Did they get the permission of The One, sitting illegally in the Oval Office to do this? Or do they have a sense that the ship is sinking, and they are being told by other powerful Democrats to start the ball rolling, and: Let's Get This Usurper Out of Here, and See If We Can Save Our Own Necks; Oh, Yes, And Maybe This Republic?

Is it time, yet for you folks to actually start paying attention to the many aspects of this story, and speaking openly about them?

The more I contemplate that paragraph, the more I think, gosh, if there really was a way to tax stupidity, our national debt would vanish in the blink of an eye. But that would be too easy.