Mubarak announces dissolution of government, but stops short of stepping down and defends response to protests 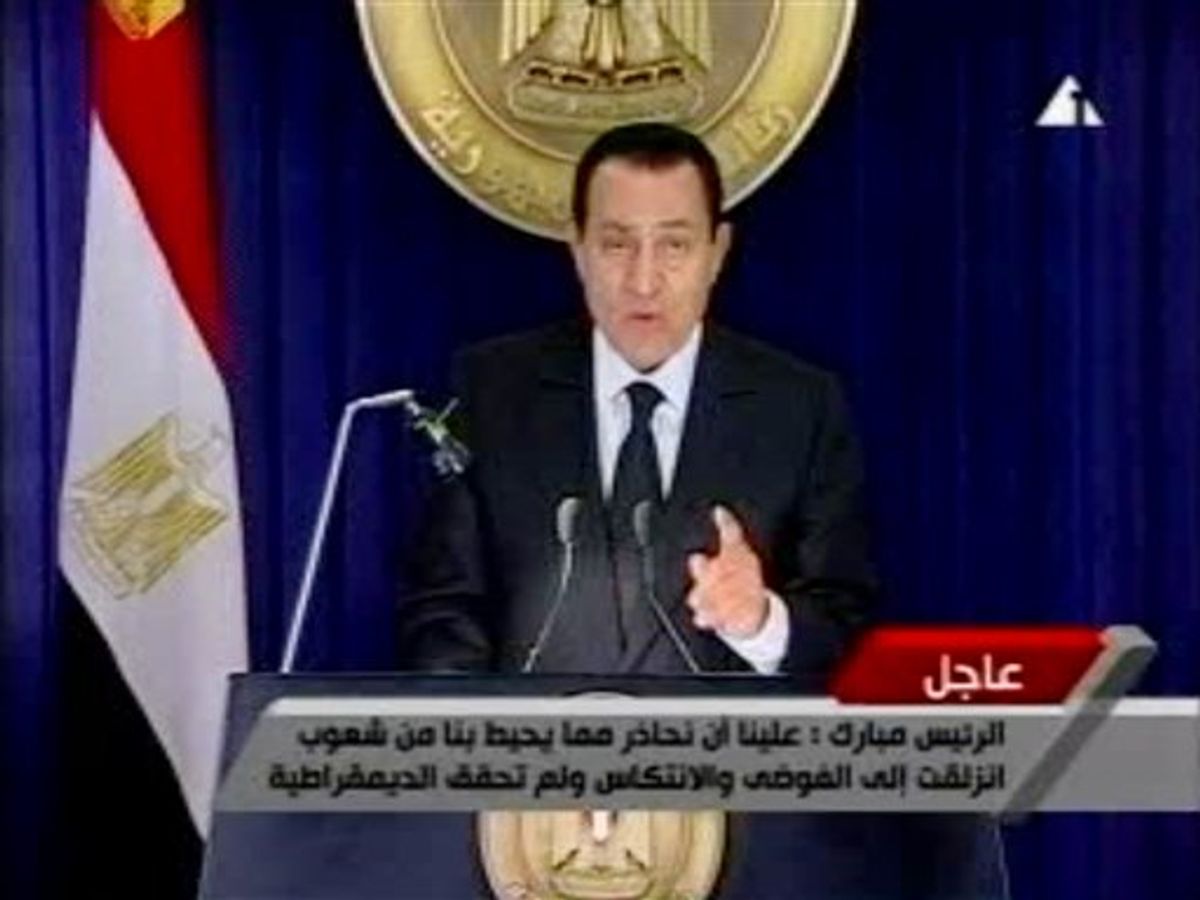 In this image made from video broadcast on Friday, Jan. 28, 2011, Egyptian President Hosni Mubarak appears on television saying he has asked his Cabinet to resign, in his first appearance on television since protests erupted demanding his ouster. (AP Photo/Egypt TV) (AP)
--

Egypt's embattled President Hosni Mubarak said Friday he had asked his Cabinet to resign and promised reforms in his first response to protesters who have mounted the biggest challenge ever to his 30-year rule.

But Mubarak also defended the crackdown by police on tens of thousands of demonstrators that drew harsh criticism from the Obama administration Friday and even a threat to reduce a $1.5 billion program of foreign aid if Egypt escalated the use of force.

A somber looking Mubarak called anti-government protests "part of a bigger plot to shake the stability and destroy legitimacy" of the political system.

The steps announced in a nationally televised speech fell short of protesters' demands for his ouster that have been a constant mantra during four straight days of demonstrations.

"Out, out, out," protesters chanted Friday in violent, chaotic scenes of battles with riot police.

They also demand remedies to widespread poverty in this nation of 80 million.

"We aspire for more democracy, more effort to combat unemployment and poverty and combat corruption," he said.

But those words were likely to be interpreted as an attempt to cling to power rather than take concrete steps to solve some of the more pressing problems facing many Egyptians, primarily unemployment and rapidly rising food prices.

Mubarak also defended the security forces' crackdown on protesters, saying he had given them instructions that the protesters be allowed to express their views. But, he said, acts of violence and vandalism left the security forces with no choice but to react top restore order.

Protesters have seized the streets of Cairo, battling police with stones and firebombs, burning down the ruling party headquarters, and defying a night curfew enforced by a military deployment. It is the peak of unrest posing the most dire threat to Mubarak in his three decades of authoritarian rule.

He said this week's protests struck fear in the heart of the majority of Egyptians concerned about the future of their country.

"Violence will not solve the problems we face or realize the objectives we aspire to," he said. "I will not shy away from taking any decision that maintains the security of every Egyptian," he vowed.