The idea of the parallel world has fascinated writers for centuries. A new book explains the science behind it 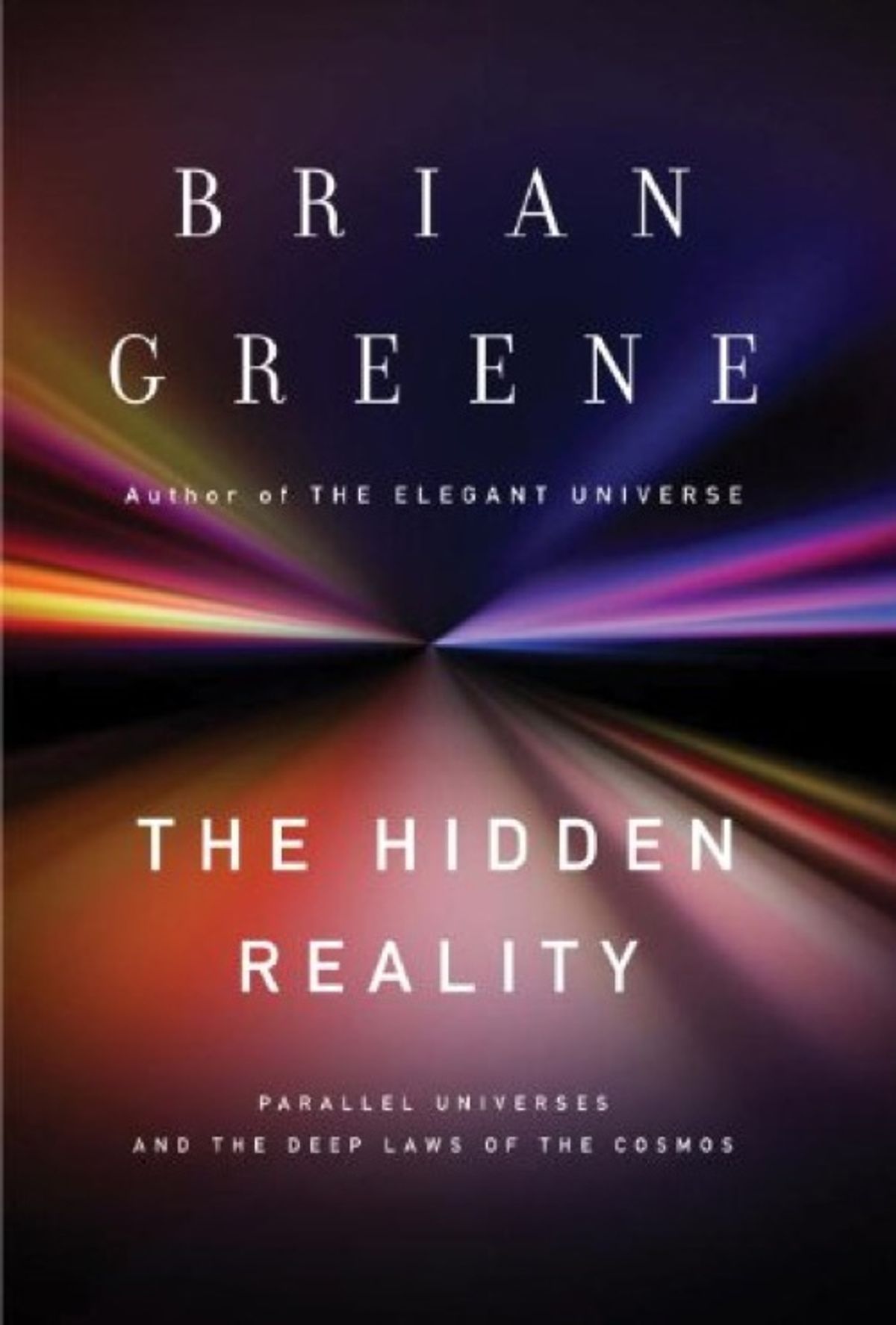 "The Hidden Reality" by Brian Greene
--

The concept of the multiverse -- a plethora of individually infinite universes of every conceivable nature, coexisting yet separated from each other in some fashion -- holds a particular horror for those who fancy that their lives derive meaning and ethical stature only from a sense of self-determined uniqueness. Ontological nausea and revulsion swiftly sets in when such a person begins to contemplate billions of his doppelgängers enacting perverse, bizarre and morally repulsive scenarios imbued with just as much existential gravitas as the one his particular consciousness in this universe experiences and privileges. Such a vision embodies self-betrayals of the most intimate possible nature.

But for those of us who relish the notion of a limitless plenum in which every possible outcome of consciousness, every possible arrangement of matter, every possible set of natural laws, is given concrete expression somewhere -- even though these other universes lie forever beyond our reach -- the concept of the multiverse offers a triumph of the imagination and spirit. No flight of fancy, however wild, is denied existence. Every potential aspect of one's character, suppressed in this universe, finds manifestation elsewhere. Bad fates in this universe are avoided in an infinity of others. And the multiverse settles all perplexing questions of "Why this?" with a simple, "Because we see only one thread of an infinite tapestry."

And you cannot really avoid forming a reaction to the notion of a multiverse either -- assuming you respect science -- since almost all contemporary physics accepts and even demands the reality of parallel worlds. Love it or hate it, the multiverse is here to stay.

It's not hard to guess -- in advance of reading Brian Greene's latest survey of the actual physics behind the multiverse, "The Hidden Reality" -- which side of the emotional fence he comes down on. Having gone to the effort of producing a hypnotically fascinating book-length explication of the concept, Greene is plainly invested deeply in the awesomeness of multiple realities. His enthusiasm and passion for parallel worlds infuses every iota of this ideationally dense yet essentially comprehensible opus.

Greene informs us at the outset that he will explicate nine types of multiverses. (Yes, we are about to encounter a multiverse of multiverses!) The first seven are direct outgrowths of discoveries or theories in modern physics: cosmology, string theory, etc. The final two are more purely conceptual or speculative exercises. So, because the first set requires grounding in several branches of science, Greene devotes plenty of space to topics that are foundational: how gravity works, the Inflationary Big Bang and so forth. Admirably, he skips the boring and redundant primer level, which so many popular science books continue timidly to include at this late date, but assumes that his readership of interested 21st-century laypeople has a solid acquaintance already with the science of the past hundred years. This tactic is much appreciated, and never abused, as any sticky or abstruse points are still treated with appropriate depth in Greene's trademark crystalline prose studded with handy and often amusing metaphors. ("Imagine you work for the notorious film producer Harvey W. Einstein, who has asked you to put out a casting call for the lead in his new indie, 'Pulp Friction.'")

It's impossible for this review to summarize every step of Greene's balletic footwork, by which, like some multi-limbed Asian deity, he dances into being each different theoretical framework that could support multiple universes. Suffice it to say, switching analogies, that his arguments are constructed like classical cathedrals, with intricate arches and buttresses that all uphold the central spire. Sometimes you think he's lost in the details of some sculpted gargoyle, only to realize how essential to the whole structure this particular feature is.

He starts with the simplest of multiverses, the "Quilted" one. In this case, a purely spatial infinity is all that is needed to produce an infinity of timelines, separated merely by light-years and not other dimensions. He concludes with the "Ultimate" multiverse, a philosophical construct owing much to the speculations of Robert Nozick. In between, we get bubble universes and "branes" and five other mind-boggling ways in which the cosmos we know can be viewed as merely one member of an endless family of possibilities.

Chapter 7, coming right at the midpoint of the book, is a very useful diversion from propounding new theories, a breather in which Greene examines the controversies surrounding the very notion of a multiverse, and whether these speculations that cannot be tested, observed or falsified truly adhere to the spirit of science. Coming down staunchly on the side of unfettered yet rigorous hypothesizing (and leaving open the possibility that our descendants will be able someday to verify our flights of scientific fancy), Greene emerges prepped to ascend even greater heights in the second half of the book.

The tension between the two camps -- lovers and haters of the multiverse -- that I described in my opening paragraphs is a constant motif throughout the book, as Greene continually seeks to justify the rewards inherent in accepting "the hidden reality" of the multiverse. His concluding sentences sum up his stance bravely and concisely: "But it's only through fearless engagement that we can learn our own limits. It's only through the rational pursuit of theories, even those that whisk us into strange and unfamiliar domains, that we stand a chance of revealing the expanse of reality."

Greene name-checks several fictional treatments of multiversal concepts in his opening chapter -- "Star Trek's" "The City on the Edge of Forever," Borges' "The Garden of Forking Paths," "Run Lola Run" -- and indeed this concept has received extensive treatment in science fiction and other types of literature, rendering its outlines familiar to even the most casual reader and viewer. The well-developed scientific treatment of parallel worlds in literature goes back at least as far as H.G. Wells, and has received extensive elaboration from writers as diverse as Edmond Hamilton and Fritz Leiber, Robert Silverberg and Keith Laumer.

Curiously enough, one of the most seminal and impactful introductions of the concept occurred in a comic book, the now-classic September 1961 issue of "The Flash," with its feature story "Flash of Two Worlds." Scripter Gardner Fox, long steeped in pulp writing, imported the notion of multiple timelines to the home turf of Superman and Batman (Marvel Comics belatedly followed suit), and an explosion of multiversal narratives ensued, to the point where parent company DC Comics felt obliged to stage "Crisis on Infinite Earths" some 20 years later, to pare down the proliferation of alternate worlds.

But if one had to pick a single author who has done the most to portray the quirks and potentials of a functioning multiverse, that figure would undeniably be Michael Moorcock. First employing the concept almost five decades ago, Moorcock has since woven nearly all his copious output -- tightly or loosely, as circumstances allow -- into one vast braided multiverse of story. So identified is Moorcock with the multiverse, in fact, that upon his ascent to Science Fiction Writer's Association Grandmaster, I was able to easily evoke a humorous scenario involving the author and his doppelgängers that any of his readers would instantly recognize.

Moorcock's latest, "Elric: Swords and Roses," is the sixth and concluding installment in his chronicle of the doomed, Byronic, albino swordsman who functions as a kind of template or seed character for so many other antiheroes in the Moorcock multiverse.

We open the omnibus (which also contains a previously unpublished screenplay, a novella and several essays, as well as pages of artwork) with its core component, a complete novel from 1991, "The Revenge of the Rose." Whereas many of Elric's early adventures dealt with the multiverse only implicitly, this late-period outing foregrounds the nature of creation in Moorcock's fiction. The multiverse nearly assumes the role of an actor in the adventure. For beneath the expected inventive sword-and-sorcery decadence (Elric, a woman warrior named Rose, and a poet named Wheldrake are all plucked from their separate timestreams for exploits in a strange world foreign to them all, as Elric hunts for the plot-coupon soul-in-a-box of his dead father), Elric must continually confront the senses-disturbing and mind-shattering -- yet also uplifting -- nature of parallel worlds.

Now Elric was caught up in a kind of intradimensional hurricane, in which a thousand reverses ocurred within his brain at once and he became a thousand other creatures for an instant, and where he lived through more than ten other lives; a fate only minimally different from the one that was familiar to him; and so vast did the multiverse become, so unthinkable, that he began to go mad as he attempted to make sense of just a fraction of what laid siege to his sanity.

But the upside is this vision, as recounted by a seer:

It is our firm belief that we shall one day learn the plan of the entire multiverse and travel at will from Sphere to Sphere, from realm to realm, from world to world, travel through the great clouds of shifting, multicoloured stars, the tumbling planets in all their millions, through galaxies that swarm like gnats in a summer garden, and rivers of light--glory beyond glory--pathways of moonbeams between the roaming stars.

And thus, through Moorcock's exuberant prose, is Brian Greene's carefully controlled and channeled mysticism -- the unnamed engine that powers his researches, yet which must be throttled in the name of science and hidden away -- given ultimate lyrical expression.