US reconsiders $1.5 billion in aid to Egypt

The Obama administration will review $1.5 billion in aid to the country as it warns against traveling there 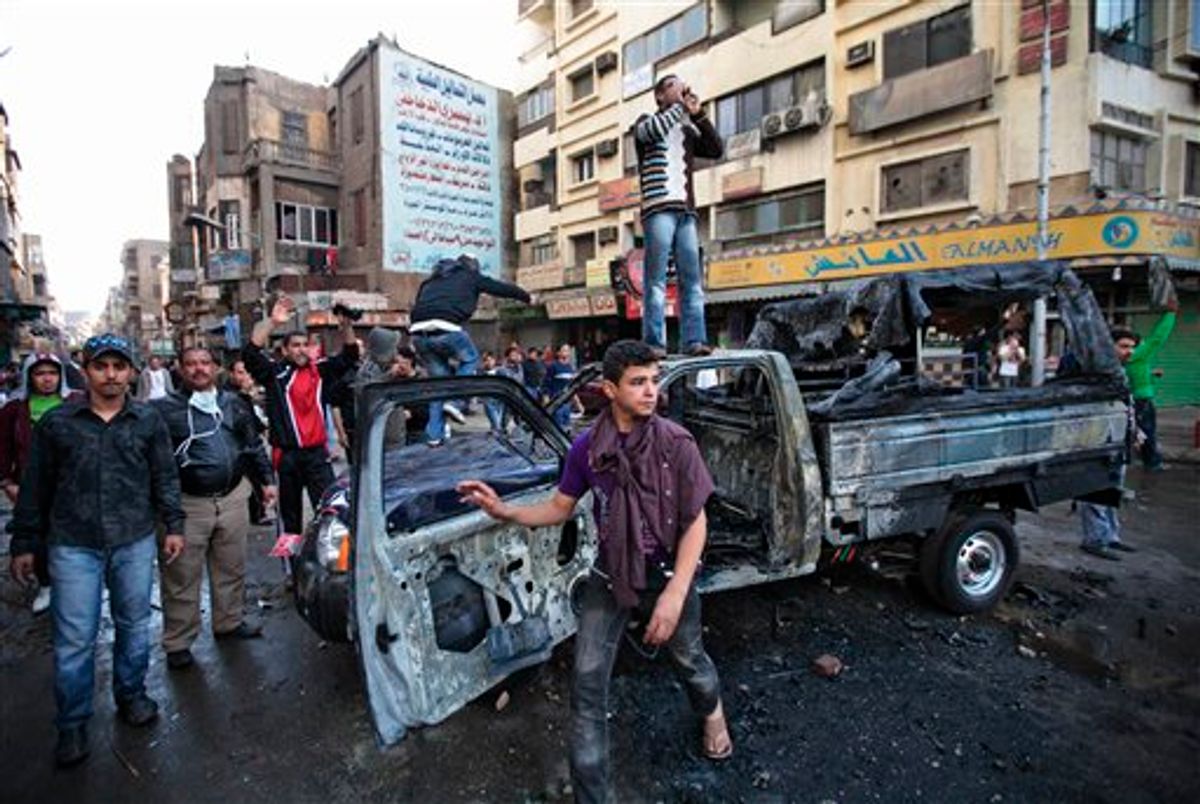 Egyptian anti-government activists, some standing on a burned police car challenge riot police officers, not seen, during clashes in Cairo, Egypt, Friday Jan. 28, 2011. Tens of thousands of anti-government protesters poured into the streets of Egypt Friday, stoning and confronting police who fired back with rubber bullets and tear gas in the most violent and chaotic scenes yet in the challenge to President Hosni Mubarak's 30-year rule. (AP Photo/Lefteris Pitarakis) (AP)
--

An Obama administration official says the U.S. will review its $1.5 billion in aid to Egypt based on events unfolding in the country, where the authoritarian government is struggling to extinguish huge and growing street protests.

The U.S. also warned citizens to avoid non-essential travel to Egypt and urged Americans in the country to stay put.

The official spoke on condition of anonymity because of the delicacy of the situation. Egypt has been a key U.S. ally in the volatile region. U.S. officials are now increasing calls on President Hosni Mubarak, the target of the protesters, to respond with restraint and reverse steps taken to cut off the protesters' ability to communicate.

The decision to review assistance to Egypt is a significant step as the U.S. seeks to balance the desire to maintain stability in the region with a recognition of the unexpected scope and uncertain outcome of the protests.

Facing the prospect that a cornerstone Arab ally might collapse, the Obama administration appealed Friday for Egyptian authorities to respect the rights of citizens and halt the crackdown on swelling anti-government protests.

Washington again urged the government of Egyptian President Hosni Mubarak to bend toward demands for political and economic reform.

The administration stopped far short of endorsing the protests calling for Mubarak's ouster, an outcome that would shake an already unstable region.

Speaking as street demonstrations rocked Egypt's capital despite a curfew, Secretary of State Hillary Rodham Clinton urged calm on both sides. She said the government must investigate and prosecute any allegations of brutality by security forces. She also called on Egypt to restore access to the Internet and social media sites that have been blocked.

"We are deeply concerned about the use of violence by Egyptian police and security forces against protesters, and we call on the Egyptian government to do everything in its power to restrain the security forces," Clinton told reporters at the State Department.

Protests across Egypt on Friday pose the most serious threat yet to the authoritarian Mubarak, a stalwart U.S. ally in the Arab world considered a linchpin for American efforts to forge Middle East peace and tamp down Islamic extremism.

His support has been rewarded with billions of dollars in U.S. aid each year over successive administrations.

"We urge the Egyptian authorities to allow peaceful protests and to reverse the unprecedented steps it has taken to cut off communication," Clinton said. "These protests underscore that there are deep grievances within Egyptian society, and the Egyptian government needs to understand that violence will not make these grievances go away."

Clinton also asked protesters to "refrain from violence and express themselves peacefully."

She sidestepped a question on whether the United States believed that Mubarak's regime was finished, but said that the U.S. wanted to work as a partner with both the country's people and government to help realize reform in a peaceful manner. That underscored concerns that extremist elements might seek to take advantage of a political vacuum left by a sudden change in leadership.

Clinton said that reform "is absolutely critical to the well-being of Egypt" and urged Mubarak and his government to "engage immediately" with opposition groups and others to make broad economic, political and social changes. She said the Obama administration had raised repeatedly with Egypt the "imperative for reform and greater openness."

"The Egyptian government has a real opportunity in the face of this very clear demonstration of opposition to begin a process that will truly respond to the aspirations of the people of Egypt," she said. "We think that moment needs to be seized and we are hoping that it is."

White House and State Department spokesmen echoed Clinton's remarks in comments posted to Twitter, one of the social media sites that the Egyptian protesters had used to organize their demonstrations and that the government has blocked access to.

On Capitol Hill, senior lawmakers expressed growing unease with the developments, which could affect their deliberations on future assistance to Egypt.

Sen. John Kerry, D-Mass., the chairman of the powerful Senate Foreign Relations Committee, said Egypt's leaders need to step back from the brink as Mubarak called in the military to help quell the protests that continued into the night, spreading in defiance of the curfew and attempts by police and security forces to break them up.

"In the final analysis, it is not with rubber bullets and water cannons that order will be restored," Kerry said. "President Mubarak has the opportunity to quell the unrest by guaranteeing that a free and open democratic process will be in place when the time comes to choose the country's next leader later this year."

Rep. Ileana Ros-Lehtinen, R-Fla., chairman of the House Foreign Affairs Committee, said the protests were a sign that the Egyptian peoples' "cries for freedom can no longer be silenced." She said she was troubled by the "heavy-handed" government response to the demonstrations.

"I am further concerned that certain extremist elements inside Egypt will manipulate the current situation for nefarious ends," she said.

For years, the U.S. has treaded a delicate line with Mubarak, supporting him to further America's Middle East agenda but trying to prod him on human rights and democracy.

While tensions were often evident at public events with U.S. and Egyptian officials, secret diplomatic cables released by the WikiLeaks web site reveal even deeper strains.

"The Egyptians have long felt that, at best, we take them for granted; and at worst, we deliberately ignore their advice while trying to force our point of view on them," U.S. Ambassador to Egypt Margaret Scobey wrote in a Feb. 9, 2009, memo before Clinton met with Egyptian Foreign Minister Ahmed Aboul Gheit.

Scobey urged Clinton to raise the issue of jailed former opposition Al Ghad party leader Ayman Nour with Gheit, but warned not with Mubarak: "Mubarak takes this issue personally, and it makes him seethe when we raise it, particularly in public."

The Egyptian government "remains skeptical of our role in democracy promotion, arguing that any efforts to open up will result in empowering the Muslim Brotherhood, which currently holds 86 seats -- as independents -- in Egypt's 454-seat parliament," Scobey wrote.