The road to Jerusalem runs through Tunis and Cairo 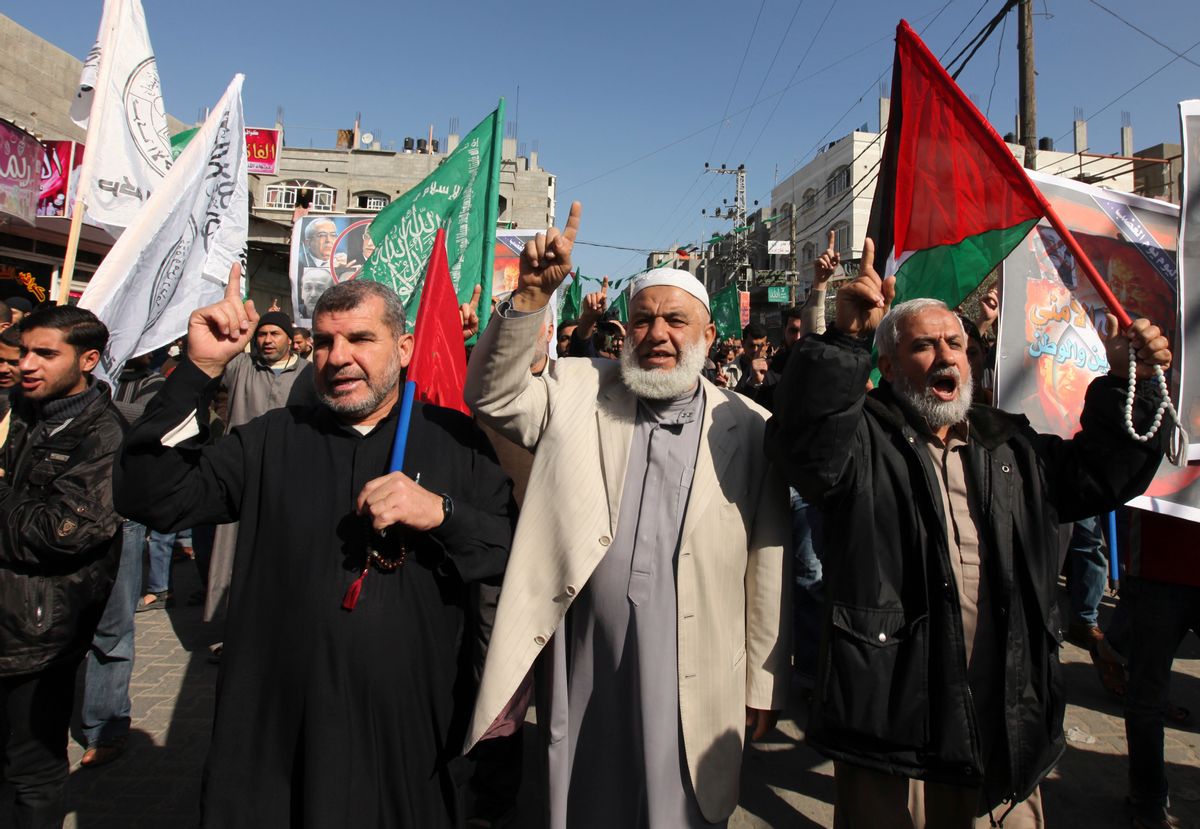 This originally appeared at Mondoweiss

The neoconservatives told us that the road to Jerusalem lay through Baghdad. They meant that invading Iraq and installing a democracy there would lead to peace in Israel and Palestine. The way they imagined that peace was a neocolonial landgrab: a greater Israel with portions of the West Bank amalgamated by Jordan. Still, that is what they believed-- that creating democracy in Iraq would lead to a peace in Palestine.

These ideas are in smithereens today. The Palestine Papers have revealed that the peace process was a Trojan horse for Israeli expansionism and that even the American client in the West Bank could not accept a future state without Ariel and Ma'ale Adunim, the long fingers of Jewish territory.

And the lessons of Iraq and Tunisia and Egypt are that you don't install democracy anywhere; no, democracy must arise from the people themselves, you damage the processes of establishing popular will by seeking to impose such a system. The western democratic revolutions also arose from within.

The lesson of Tunisia and Egypt for American foreign policy is that the United States is the most conservative force in the world, in this region. It didn't see democracy coming because it didn't want to see it coming to the Arab world and to the palaces we supported. And when democracy did come, the U.S. creditably reversed field in Tunisia, but has stuck by its dictator in Egypt.

Barack Obama's failure to honor the Egyptian protesters in his State of the Union speech Tuesday night, and Joe Biden's cold negativity toward them last night (they're not up against a dictator, we can't encourage them, this is not the awakening of eastern Europe) reveal the unwavering influence of the Israel lobby in our public life, and how conservative that influence is. The administration's statements reveal that it prefers stability in Egypt, no matter the cost to civil rights and human rights there, to freedom for Arab people. And why? Because Egyptian stability preserves the Israeli status quo, in which Israel gets to imprison West Bank protesters without a peep from the U.S. government and gets to destroy civilians in Gaza again without a peep from the alleged change-agent in the White House.

Thankfully, P.J. Crowley was forced to reveal the policy yesterday by Shihab Rattansi of Al Jazeera, when he admitted that the difference between the administration's response to Tunisia and Egypt stems from the fact that Egypt has a peace deal with Israel and has come to terms with Israel's existence, a model to the region. And this line is echoed all over the American news, when they say that Egypt is helping the "peace process," a process that has produced only suffering and dispossession for Palestinians.

The hole in the bottom of the world here is the fear that Arabs have not accepted Israel's existence. They didn't accept it in 1947 in New York, and they didn't accept it in 1967 in Khartoum. They always warned that its presence would create instability in the region, and the State Department said it would radicalize Israel's neighbors, and 60 years on this is more true than ever. The Arab Peace initiative of 2002 was a great gesture of realism: the Arab states did accept Israel's existence, on the '67 lines. But nothing has come of this incredible shift, and Brian Baird tells us that leading American congressmen, tucked in at night by the Israel lobby, didn't even know about the Arab Peace Initiative, and Israel scoffed at the offer because it had American power behind it.

Now in Tunisia and Egypt, the Arab street has taken the neocons at their word and said, Yes we want democracy, and we will get it. And Arab youth has taken facebook and twitter and done more with these tools than Americans have done, and said we want free speech and social freedom.

And when they get it-- if not this year then within ten years, the internet is too dynamic a force, along with Assange and Al Jazeera-- when they get it, they will expose the power of the Israel lobby so that even Chris Matthews will have to address the contradictions. For we will be seen to have only one policy, the preservation of a Jewish state, even if that means Jim Crow and apartheid and stamping out democratic movements everywhere and tolerating a prison for 1.5 million innocent people in Gaza. I waffle about the two state-solution more than anyone, I actually imagined that partition might preserve tranquility, but when democracy comes to Cairo the pressure on Jerusalem to allow equal rights for all citizens will be massive. And the claim that Israel is the only democracy in the Middle East will have completely dissolved.

You see the pressure on Jerusalem beginning in earnest now, from new quarters. You see it in Admiral Mullen's awareness that Americans will come home in wheelchairs until Palestinians have freedom, in Senator Rand Paul's call for cuts in military aid to Israel.

That pressure must come to bear soon on the Democratic Party. It is the natural home for the recognition of minority rights and the self-determination of formerly-oppressed people. How sad that even Russ Feingold can scarcely talk about Obama's war when he speaks out to a progressive audience, and can't even talk about Palestine. Pathetic.

What we see in Cairo is the destruction of American racist attitudes. A year or so back a Jewish friend said to me that if Jews could take on the Israel lobby and reform American foreign policy, it would be a model for human rights leadership across the world. And I agreed; and we are working at it.

But that was an elitist conceit. The moral leadership in the region is coming not from any American movement in our imperfect democracy, no, we are the most conservative country in the world right now; it is coming from the streets in Tunisia and Egypt.

Philip Weiss is the co-editor of "

The Goldstone Report: The Legacy of the Landmark Investigation of the Gaza Conflict