How did the U.S. get in bed with Mubarak?

A historian explains how the U.S. became closely tied to the Mideast dictatorship 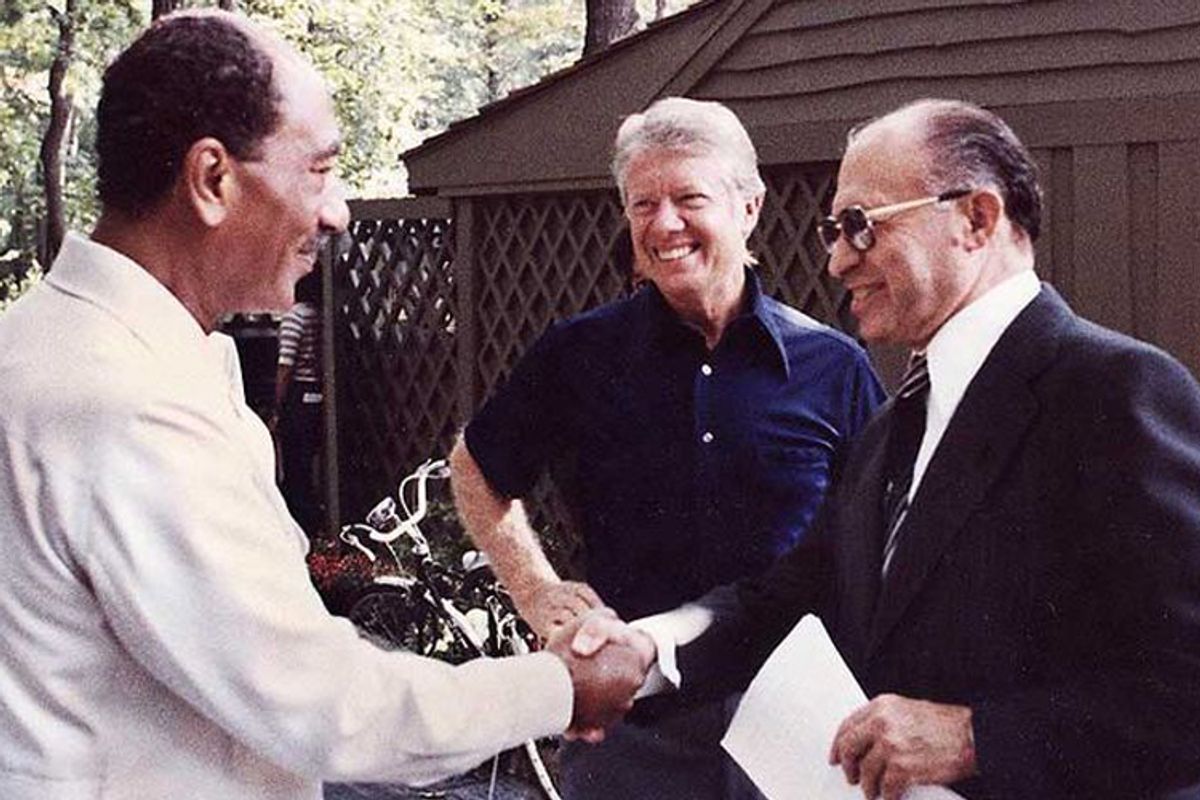 Much of the media coverage of the protests in Egypt has noted that President Obama is in a tough position because the regime of Hosni Mubarak is an important ally of the United States.

So it's natural to ask: How and why did the United States become allies with Egypt in the first place? And how has the alliance, which includes an annual military aid package worth $1.3 billion, been sustained over the years?

To get some answers, I spoke with Joel Beinin, a Middle East history professor at Stanford who studies Egypt and who spent several years at the American University in Cairo in the 2000s.

What follows is a transcript of our conversation, edited slightly for length and clarity:

How far back can the roots of the current alliance be traced?

It goes back to the aftermath of the 1973 Arab-Israeli war when, following the near-victory of Syria and Egypt, Henry Kissinger engaged in many rounds of shuttle diplomacy, which resulted in a separation of forces agreement between Israel and Egypt. Those were the first steps which led ultimately to the Israel-Egyptian peace treaty, which was signed in 1979. That was not at first what the Carter administration wanted to have happen. They wanted at first for something to be included on the Palestinian issue, but it wasn't, so they just said, "OK, this is what we can get."

In that time of the early 1970s, what were the U.S. interests in the situation?

Well, at that point, Egypt was an ally of the Soviet Union. So the U.S. had no interests in Egypt, only aspirations to have interests. Carter ultimately did support Anwar Sadat's visit to Jerusalem, had the Camp David meeting with Sadat and Begin, then the peace treaty. The peace treaty was sealed essentially with a promise that Egypt would receive $2.3 billion a year in aid, divided between economic and military, and Israel would receive $3 billion. That ratio was kept stable for many years, although now the economic aid to both countries has diminished the total number somewhat.

At that point did the orientation of Egypt switch from the Soviet Union to the U.S.?

Yes. Egypt basically switched sides in the Cold War in the course of all of this. Sadat was wanting to do that almost immediately after he came to power in 1970. Kissinger didn't believe it, for reasons that are not clear -- a combination of ignorance and ego and preoccupation with Watergate and Vietnam.

At a certain point, you can say post-1973, between the shuttle diplomacy and the treaty with Israel, Egypt switched sides in the Cold War. Despite Sadat having been assassinated in 1981, Mubarak was his vice president -- he had been chief of staff of the air force in the 1973 war -- so the regime remained in the same mold as it had been under Sadat. Mubarak has been a steadfast ally of the United States for the entire 30 years in which he's been in power.

His being a steadfast ally -- what has that done for the U.S. beyond the Israeli question?

Egypt was the first among the Arab states to join the United States in attacking Iraq in 1991. For that they received forgiveness of about 50 percent of their foreign debt. That deal was of course never formulated that way, but if you look at the timing, you can see what happened. Then Egypt has opposed the American invasion of Iraq in 2003, but nonetheless it did not break relations. It remained tight with the Bush administration. Despite the considered opinion of President Mubarak that this was not a good idea, which turns out to be correct, he stayed with the United States. And most recently, Mubarak, along with King Abdullah II of Jordan and King Abdullah of Saudi Arabia, has been gung-ho for attacking Iran. We know that from the WikiLeaks documents most recently, but that's also been quite public in recent years, that these guys are terrified of Iranian and Shia influence.

So what about the treaty with Israel; is that really the key to the whole U.S.-Egypt relationship?

I would say it's not more important than the other things. The three leaders -- the two King Abdullahs and Mubarak -- they are America's most important allies in the eastern Arab world. That's very important because that's the defense of oil, it's the defense against the vast popular anger in the Arab and Muslim world against the United States -- for its positions vis-à-vis Palestine-Israel, for invading Iraq, having imposed sanctions on Iraq for the decade before, which led to the unnecessary deaths of untold Iraqi children. These guys are with America no matter what, though against their people and against Iran, Hezbollah and all the other regional forces that are less than thrilled with the role the United States plays in the region.

On the human rights front within Egypt, has there ever been any real pressure from the United States on that?

It depends on what you think "real" is. Condoleezza Rice gave a speech in June 2005 at the American University in Cairo. It was a very strong pro-democracy, pro-reform speech, not unlike the speech President Obama gave in Cairo shortly after he was inaugurated, but maybe even more forceful. It was utterly misguided because the notion was, OK, we've toppled Saddam Hussein in Iraq and we're going to build democracy and that's going to be the model in the Arab world. Obviously that did not happen, and when it didn't, the Bush administration -- like the Obama administration -- had no choice. These dictatorial, autocratic corrupt guys are our allies. We would really like it if they were democratic, if they were more respectful of human rights, if they would do any number of things. But we are not going to press so far as to endanger their regimes, because we need them.

So despite the speech by Rice, there was no underlying policy change?

The policy change was, in the Bush administration, the United States spoke frequently and publicly about different democratic and human rights issues in Egypt. The Obama administration wanted the same things as the Bush administration but they backed off of any public confrontation. It's a question of tone and specificity and so on. You could see this in the State of the Union, where Obama said, "We support the democratic right of the people of Tunisia to choose their own government." And he said no such thing about Egypt.

What's your take on the present situation?