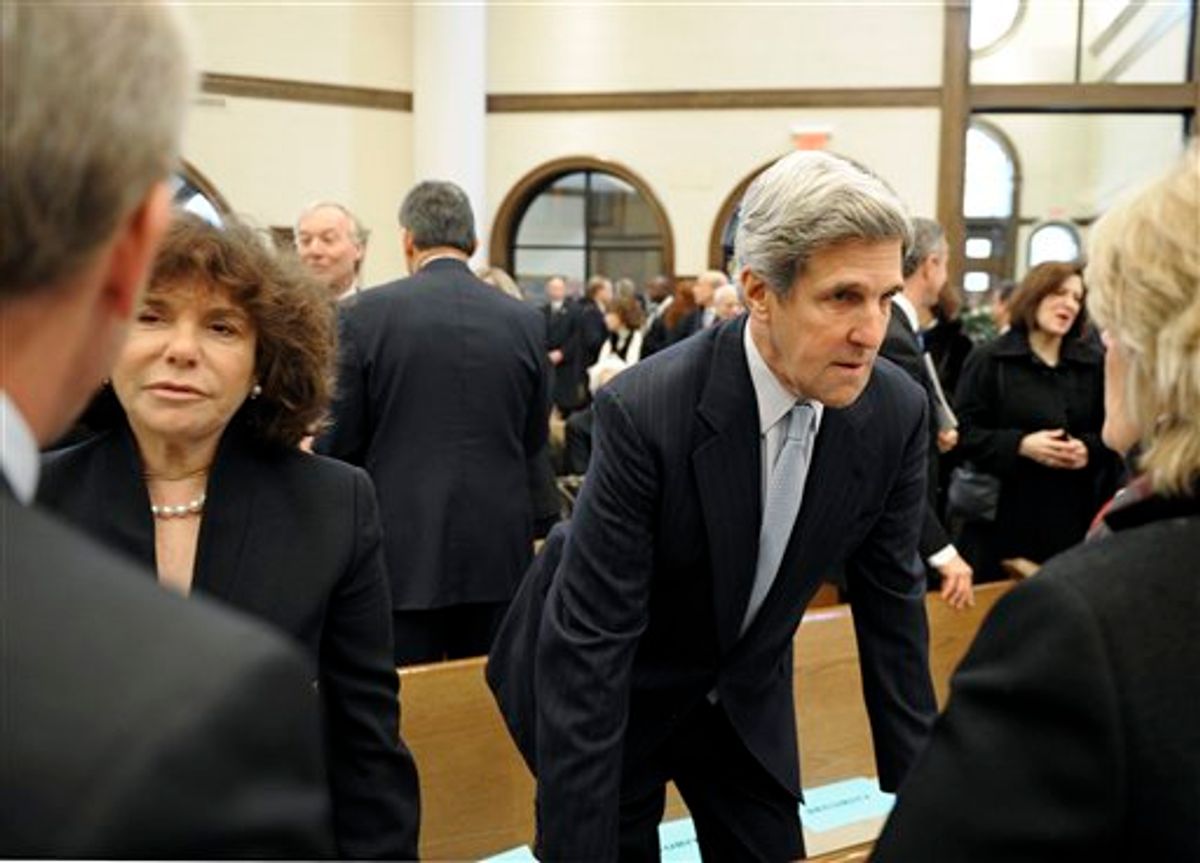 Sen. John Kerry, D-Mass., and his wife Teresa Heinz talks with guests at the funeral Mass for R. Sargent Shriver at Our Lady of Mercy Catholic church in Potomac, Md., Saturday, Jan. 22, 2011. Shriver, an in-law of the Kennedys, and the first director of the Peace Corps, died Tuesday. He was 95. (AP Photo/Cliff Owen, Pool) (AP)
--

U.S. Sen. John Kerry said Saturday that Egyptian President Hosni Mubarak must respond to the concerns of his citizens and the issues they are having, as the Egyptian protests were observed at the World Economic Forum.

"I think that we have to see how things move today and, obviously, the key here is for President Mubarak to respond to the needs of his people in a way that is more directly connected to their frustrations, much more so than apparently yesterday's speech succeeded in doing," the chairman of the Senate Foreign Relations Committee told The Associated Press Saturday on the sidelines of the Forum's annual meeting.

"I think he's got to speak more to the real issues that people feel," the Democrat from Massachusetts said. "Dismissing the government doesn't speak to some of those challenges."

Salil Shetty, the head of Amnesty International, told AP that Mubarak's decision to fire his Cabinet won't quell the anti-government protests that have shaken the country for five days.

"The idea of changing your cabinet is a bit of a joke. People are very clearly saying they want very fundamental change, constitutional change," he said.

Shetty said the human rights group has staff in Cairo and is traveling around the country even as the Egyptian government seeks to prevent media organizations and observers from reporting on the protests.

He said the closing down of peaceful avenues of protest and expression will backfire on the government and is one the reasons why demonstrations have turned violent.

"Essentially, what's happening in the Arab world as we speak is young people standing for their rights," he said. "They want political and economic freedoms. They are expressing it in the only way they can express it because there is no space to have peaceful expression."

Yassine Brahim, Tunisian Minister of Infrastructure and Transport, said he was hopeful Egypt would "make the right step" in solving its problems.

"We are seen in Tunisia as maybe having set an example, but I consider that each country is different," he added.

Danish Prime Minister Lars Lokke Rassmusen said EU ministers will meet Monday about Egypt. "I think it is of crucial importance that we put strong pressure and, at the same time, offer assistance to what is going on in Egypt right now," he added.

Kofi Annan, the former U.N. secretary-general, said the demands of change being sought by the protesters likely cannot be stopped.

"It is obvious that people are demanding change and reform, and this demand for change, I don't think it will be stoppable," he said.

The Cabinet's resignation followed days of anti-government protests and just hours after Mubarak told the nation in a televised address that he has decided the sack the Cabinet.

The protests are the most serious challenge to Mubarak's rule since he came to office nearly 30 years ago, but the 82-year-old leader has made no mention in his address of the calls for him to step down.

Asked if Mubarak should step down in a bid to calm the growing protests, Kerry said it was not his place to say.

"I don't know. I think you first have to sit down and have a discussion with him on the future of Egypt," Kerry told the AP. "I'm not going to call for that in a newspaper, but we've got to have those conversations."